Back in May, a Wisconsin angler by the name of John Grover caught and released a fish that 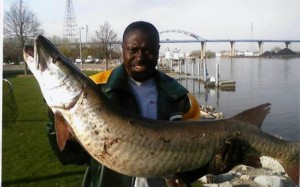 potentially could have propelled him into the world record books. ON May 9, Grover was fishing for walleyes on the Fox River in Green Bay, Wisconsin when he hooked onto something a little larger than what his 17 pound test fishing line usually handles. After an hour of fighting this massive fish, John hoisted a giant musky from the waters of the Fox. John landed the fish, measured it, took some pictures and then released it back into the water.

There has been a lot of controversy over the fish since the photo was shown to the owner of Smokey’s on the Bay, a local bait shop that John frequents, but no matter what your opinion is, that is a giant musky. The current world record was set in 1949 at 67.5 pounds, but the dimensions that John said the fish were, would put it at an estimated 72 pounds.

In any case, the Fox River and Green Bay is going to be a hot spot for musky fishermen this year and some other luck angler may have the chance to catch and submit this fish for world record consideration.

Check out John Grover’s interview with Smokey’s on the Bay below.