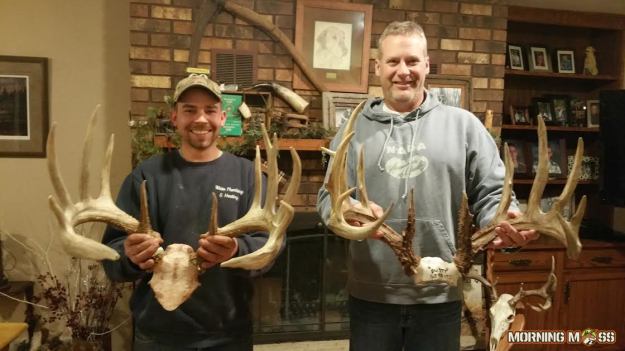 It is a once in a lifetime experience to shoot a giant buck and even more of one to shoot a state record. Wisconsin is home to some of the biggest bucks in the world and the records keep getting broken. This past week, the giant typical buck shot by Adam Hupf was declared the new Wisconsin state record typical buck for archery. It broke the previous record held by Dusty Gerrits of a buck shot in 2012. Pictured above are both men with the racks of their state record bucks, with Gerrits passing the torch if you will. These amazing deer were both shot by quality hunters and it’s great to see them with both of these monster Wisconsin bucks. 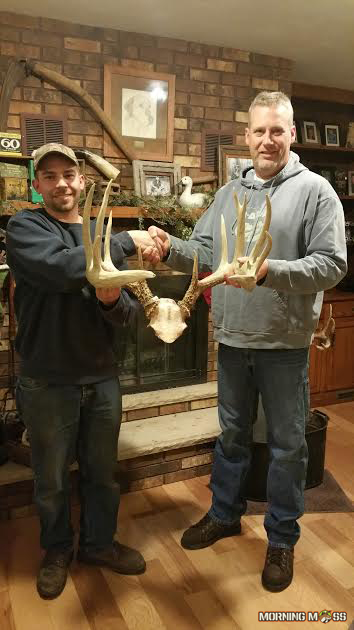 Dusty Gerrits’ buck was shot in Fond du Lac County in 2012 and reached a net typical score of 189 3/8 inches. The buck had 12 score-able points and beat out the previous record, the Inda buck, by more than an inch. The Inda buck taped out at 188 2/8 inches and was shot in Fond du Lac County as well in 2010. Adam Hupf’s buck that was shot this past October (2014) had 13 score-able points and had a net score of 191 6/8 inches, beating out Gerrits’ buck by 3 inches. It’s amazing to see some of these giant whitetails shot in the Badger state and it seems that these deer just keep growing.

Congratulations to all of these men on the awesome deer. It’s so much fun for all of us as bow hunters to be able to chase these deer and it’s outstanding that you can see a picture of two hunters that have done everything right pose for a photo with absolutely no jealousy or animosity towards each other.