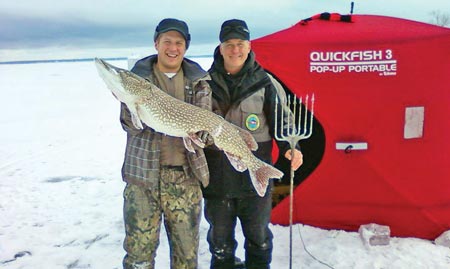 Decoying and spearing northern pike through the ice is a wonderful and exciting past time.  But that’s not legal, you say.  Well, actually, winter pike spearing is legal in Wisconsin on Lake Superior waters as well as most waters of eight other states.

Much like Wisconsin sturgeon spearing, pike spearing consists of cutting a hole in the ice and placing a tent or shanty over the hole.  The structure is called a “Darkhouse” due to the fact that it has no windows.  A decoy is placed in the water to attract predator fish such as northern pike.  Decoys can be purchased from commercial dealers, but most spearers prefer hand-made decoys.  These decoys are carefully weighted and balanced in order to swim gracefully around the hole.  Some spearers prefer natural looking decoys, while others like hot-colored high-contrasting decoys.  Unlike sturgeon, which are attracted to a decoy out of curiosity, northern pike are attracted by their predatory instinct.  This often results in savage strikes to the decoy.  Because of the small confines of the spearing hole most fish appear quickly and without warning, adding a thrill that can only be compared to seeing a 10-point buck suddenly emerge from the timber while hunting.

Winter spearing is an ancient art that has been practiced in North America, Europe, and Asia for thousands of years.  French Missionaries first observed Native Americans spearing through the ice in the Great Lakes Region in the 1600’s.  Native Americans first used decoys made from antler and bone while lying on the ice covered with animal hides or blankets.  Winter spearing was a popular pastime in all the Great Lakes states; especially from the beginning of the 1900’s through the 1950’s.  While popularity in this sport continued in states such as Minnesota and Michigan, Wisconsin began to concentrate on Lake Sturgeon rather than northern pike.  As a result, northern pike spearing was banned in the majority of Wisconsin waters.  Legal spearing seasons were still followed on the Wisconsin/Michigan and Wisconsin/Minnesota Boundary Waters as recently as the late 1980’s, when they were removed from the books – citing a lack of participation.  A resurgence in this sport is occurring in the Great Lakes states – including Wisconsin.  People are finding out just how fun this sport really is.

An organization called the “Wisconsin Darkhouse Anglers Association” was formed in 2012.  This dedicated group of winter spearers spends a large amount of time pursuing northern pike in states such as Michigan, Minnesota, and North Dakota.  The rest of their time is spent making decoys and trying to promote and enhance the sport.  This organization’s most recent accomplishment is attempting to re-open winter pike spearing on the Wisconsin/Michigan Boundary Waters.  A question regarding winter pike spearing will appear on the ballot of the Spring Conservation Congress Hearings, which are held on the 2nd Monday of April in each county in Wisconsin.

The Wisconsin Darkhouse Anglers Association (WDAA) is fully aware of negative connotations that are associated with spearing in Wisconsin.  That is why their primary objective is to educate the public about winter pike spearing.  People have a pre-conceived notion about winter spearing and how easy and detrimental it is.  WDAA is busy trying to lay those fears to rest.

Opponents to spearing say that spearers target only large fish.  ALL fishermen target large fish.  Targeting and harvesting are two very different objectives.  Spearing is no easier than conventional angling. The fish are still subject to weather patterns, pressure and other influencing factors.   And, large pike are like large bucks – they didn’t get that big by being stupid.  I myself have only harvested 1 “trophy” pike – and it took me 25 years of spearing to do it.  Other opponents say spearers harvest too many fish.  Spearers are subject to the same bag limits as other anglers, and in many states there is a reduced bag limit while using a spear.

When a species is managed correctly, method of take does not matter.  Unlike boat fishermen and conventional ice fishermen, spearers are confined to a very small piece of water.  Wisconsin boasts the largest spear fishery in the world for Lake Sturgeon – arguably the most highly valued species in North America.  Proper and insightful management has allowed this fishery to continue, and even expand. 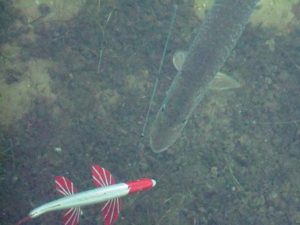 Musky anglers have been regular opponents to pike spearing – citing mistaken identity with muskies.  However, muskies are easily identifiable in the spearing hole.  They look different and act different than northern pike.  Furthermore, spearing is not really a sport that someone can just “take up.”  Most spearers have been “mentored” by someone.  Along with the educational process comes identification – just like any other hunting or fishing sport.  Northern pike are very prolific and compete directly with muskies – making pike harvest beneficial to musky populations and pike populations as well.

Winter pike spearing offers several advantages over conventional angling.  Many modern anglers practice “Catch and Release” to help conserve the species.  While well intended, “incidental mortality” can be quite high on fish populations due to hooking and handling.  While appearing healthy, fish sometimes die hours or days after release.  Spearers enjoy a practice known as “Look and Release.”  If a spearer does not wish to harvest a particular fish they merely let it swim by with no harm to the fish.

Spearing anglers also enjoy the added benefit of watching fish be fish, due to the fact that they sometimes spend several minutes in the hole.  Probably the greatest benefit observed during spearing is what we call the “Wow Factor,” and its appeal to all ages and both genders.  Children enjoy this sport more than any other group because of the visual effect that spearing offers.  Spearers are offered the benefit of observing many species of fish besides pike.  It’s like staring into a giant aquarium.

Once kids, or anyone else see a couple of fish, they don’t want to leave.  Cell phones and video games are forgotten for awhile, and parents can experience valuable “quality time” with their kids.  No one wants to leave the darkhouse so conversation flows freely.  Women especially like spearing because it requires no particular “skill set” that they fear they might be missing.  The darkhouse can be a warm comfortable place to just watch a little bit of nature at its finest.

Participation in hunting and fishing is dropping every year.  Winter spearing allows for the recruitment of new participants from all walks of life, thus helping pass on the “Outdoor Heritage.” 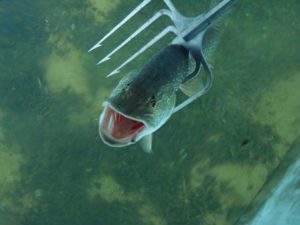 Winter spearing also offers a mix of activity throughout the year.  Most spearers, when not spearing, are busy making their own equipment ranging from decoys to spears and on up to darkhouses.  Much like a trout fisherman who takes great pride in watching a trout take in a fly that they have tied themselves, so does a spear fisherman feel the same pride when a pike slams a decoy they made themselves.  Decoys can range from simple to elaborate works of art.  There are many competitions around the country featuring fish decoys.  Prize-winning carvers have sold their decoys for hundreds of dollars, and antique or “famous name” decoys can fetch thousands of dollars from collectors.

While not for everyone, winter spearing offers countless hours of fun for the entire family.  To a spearer, winter is the best time of the year, and it fades away all too quickly.  If your curiosity has been raised even a little, check out the Wisconsin Darkhouse Angling Association on facebook and their associated links.  If you have further questions regarding spearing you can e-mail them at: Wisconsin Darkhouse Angling Association@gmail.com.  If you would like to see winter spearing expanded in Wisconsin, contact the DNR Bureau of Fisheries.  If you’re still not sure – give it a try.  What have you got to lose but a winter of fun?