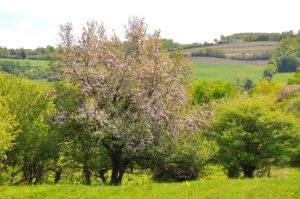 Do you remember the story of Johnny Appleseed from grade school?  It is more than just a story; Johnny Appleseed was a real person named John Chapman, born in 1774.  Legend has it that he spent years walking throughout Pennsylvania, Ohio, Indiana, Illinois, West Virginia and Ontario, Canada randomly dropping apple seeds along the way.  The truth is that he was a knowledgeable nurseryman and a noted conservationist.

Johnny Appleseed didn’t go around tossing apple seeds everywhere, he went around planting deliberate orchards.  In the early 1800s, frontier law allowed people to claim land by developing a permanent homestead.  One way to make a claim was by planting 50 apple trees.  John Chapman did just that, planting apple seeds in orchards.  Once planted, he put fences around the orchard and left a neighbor to care for it.  He would return every couple years to check each orchard’s progress and when they were producing sufficiently, he sold the land.  By the time of his death at age 70, he had covered 100,000 square miles and owned more than 1,200 acres of land.

The apples Johnny Appleseed planted were not the sweet eat-out-of-hand apples we look for today.  They were small and tart, called “spitters” because that’s probably what you’d do if you took a bite of one.  The apples he cultivated were mostly pressed to make hard cider and applejack.  Unfortunately, when Prohibition came along in the 1920s, FBI agents took the ax to the majority of Johnny Appleseed’s apple trees.  The last known apple tree to be planted by Johnny is 176 years old and still stands in Nova, Ohio.  However, there are trees that have been grafted from his trees still growing throughout the area of his travels.

The apples we buy today in the grocery store and the apple tree saplings we obtain from nurseries are not grown from seed.  They are the result of careful grafting of existing apple trees, forming clones that are genetically identical.  Often, they’ve been grafted onto the roots of other types of apple trees to control how large they will grow.

There are still “wild” apple trees to be found in Wisconsin, along country roads, beside farm fields, at forest edges, along abandoned railroad tracks and in cemeteries.  These apple trees may have grown on their own from seed and the size, flavor, ripening time and color are purely left to chance.  Sometimes these apples aren’t the best tasting, but sometimes they rival the sweetest apples in the produce aisle.  If you come across a wild apple tree, sample the fruit.  If it’s awful, wait a few weeks and try again.  Even though the apples appear ripe at first taste, they may not have been ready for harvest.

Since wild apple trees haven’t been doused with poison to control for insect pests and diseases, the apples may be wormy or misshapen.  On the other hand, you may come upon a tree that is naturally resistant to insects and diseases and find a tree full of perfect, beautiful apples.  You can always cut the bad parts out of less than perfect apples and use the good parts.  You can’t beat free!