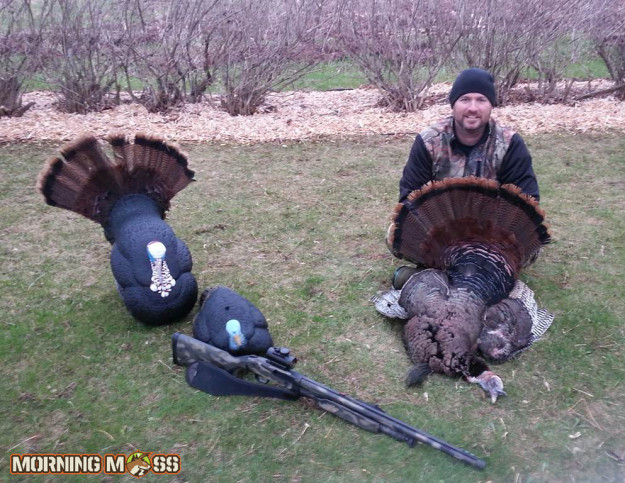 Jeff Heim shot this big Wisconsin Tom Turkey in the 3rd period of the Wisconsin turkey season this morning.

Jeff Heim is glad he got out of bed early today and was the first hunter to the middle of this cut corn field, because it paid off big time. Jeff was able to seal the deal on a big Wisconsin Tom near Green Bay, WI  today when he shot this gobbler in the middle of a field in his blind. The turkey was shot at an astounding 65 yards and weighed in at 23 pounds with a 9 inch beard and 3/4 inch spurs. 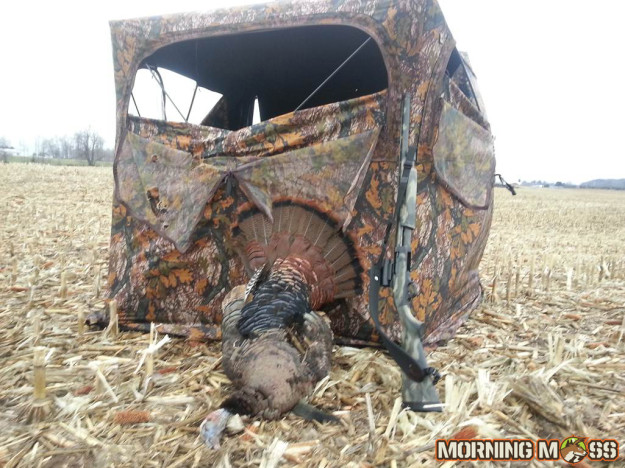 Jeff credited patterning his shotgun to his success, and his ability to get out there early and set up. Earlier in the morning he had the turkey at 50 yards, but though it may come in closer to look at his decoys. Jeff said that the tom was strutting and showing off for his full-strutter decoy and breeding hen when all of a sudden the tom broke strut and started to leave…. so he quickly shot. When he got halfway to the bird, he noticed another person walk into the same field. Good thing he acted fast and got the tom down before the other hunter scared it off. The tom was on the ground by 6 a.m.

Nice work Jeff on a great tom. Hopefully we’ll see some more turkey photos this weekend and maybe even some great submissions of fish as well.