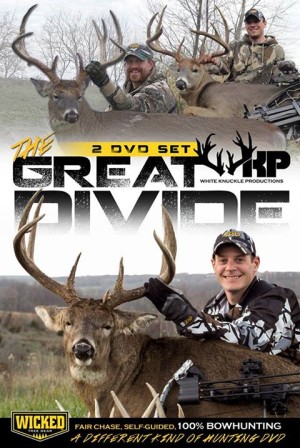 Todd Pringnitz is at it again, and he’s doing a great job. White Knuckle Productions is a do-it yourself White-tailed deer video company that produces quality videos of average guys and girls, shooting great bucks. Todd began White Knuckle Productions with the idea of providing a down-to earth hunting videos and he’s done a great job. His newest video, “The Great Divide” is awesome and I have personally watched it.

I would recommend watching this video to anyone and everyone who loves the whole experience of hunting. From setting food plots to finding sheds, the entire season is in the video. I know several hunters who film for WKP and they put in a lot of time and effort. Todd is from the mid-west and hunts his home farms in Iowa and each year puts down some awesome bucks. In the latest video, Todd shoots a 10-year old buck and an 8 year old buck he called Barry Sanders. The stories behind these are not only emotional and inspiring, but also true. There are no fences, no outfitters, just plain hard work.

Check out the trailer for “The Great Divide” here and you can buy White Knuckle Productions gear and videos on www.whiteknuckleproductions.com