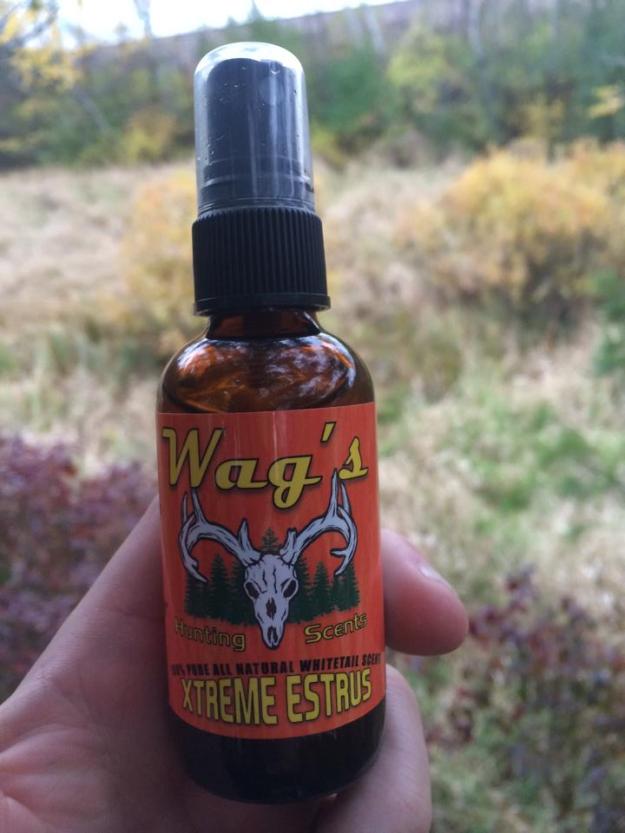 Wag’s Extreme Estrous scent is unlike any other doe estrous on the market and is 100% pure.

Recently the guys over at Wags Hunting Scents were kind enough to send me some estrus scent to try. Wags is a Wisconsin based company that is not too far from where I live, so I was really excited to try out the scent (and was in dire need of some). It’s a little early for the scent in Wisconsin, but not on the deer that they have at Wags. Nik Wagner, the owner, told me that they got the estrous from a hot doe the morning that he mailed it out and they only get scent from does during the peak of estrous. I was pumped to try it out and expected it to be similar to every other scent that I’ve tried.

The first thing I noticed about the bottle was the spray cap, which was a huge benefit to me. I’m used to using scents that have just a screw on cap, so this was much easier to use and you don’t waste nearly as much as you would with a screw on cap. Right after opening the bottle, I could smell the scent. This smelled very sweet and if you read on their site, that’s exactly how they describe it. It was not like any other deer scent that I’ve had before and I told this to Nik. He said that the reason is that his is 100% pure estrous. Other companies fill with other products like ammonia, but at Wag’s they only use pure products.

This is basically the “organic estrous” of the deer world. It is the real thing and is as close to having a hot doe running around as you can get. While we all love when we get a hot doe in our hunting area, being able to recreate that on our own can be a huge benefit and walking to your deer stand with a little on your boot is a good way to draw in a big buck.

While I did not see a big buck this last weekend while using the scent, I expect that to change later this year. All of their scents come in glass bottles for preserving the scents best and they don’t sell any scent after the year is over.

There are lots of locations in Wisconsin to buy Wag’s hunting scents, but you can also order it online here. Try out Wag’s Extreme Estrous this year for something different than your normal deer scent and see what you think. I love the idea of supporting a local, small business and couldn’t’ be happier with this.