UP A CREEK WITHOUT A PADDLE BECAUSE A POLE IS EASIER.

Some of the best fishing and hunting locations in Western Wisconsin are on, or along, the rivers like the Red Cedar, the Chippewa or the Buffalo. My preferred watercraft for traveling these waterways is a canoe.  It seems like many of the best spots are just upstream from a landing, but many of these rivers are too shallow or too full of snags to make using a motor practical. A canoe is the answer to getting into remote spots.  Poling is one of several traditional methods for moving a canoe upstream. Lining, sailing, and dragging are other traditional techniques the modern canoeist can use to travel into places boats and canoeists, who only paddle, cannot go.

One of the favorite fishing spots is around Happy Island on the Chippewa River.  I will put in on the landing on the upstream end of the island and float, fishing down one side of the island and then pole and line back up the other side of the island until I get back to the landing.  I have a secret duck hunting spot on the Red Cedar and the only way to get there is by canoe, even a Go Devil boat cannot get back there.  To access this spot, I can either pole upstream for about a mile or float 5 miles downstream.  So poling is the better option.

A ten foot pole is generally adequate for propelling a canoe. The pole can be cut from a tree, hickory is best, or a closet pole can be used. Either way, the grain must be straight and the wood carefully inspected for hidden defects. One end is tipped with a piece of metal, which is pinned in place. I made my tip out of a galvanized pipe fitting that matched the external diameter of the pole.  Then I reduced the fitting to a smaller size and I screwed a plug in the end.  I pinned the fitting to the pole and used JB weld to lock the plug in place.

To pole, stand up in the canoe with your feet slightly wider than shoulder width. The rear foot is nearest the gunnel that you are facing and the front foot is nearest the opposite gunnel. This stance allows the poler to maximize power on the pushes and to balance the canoe. The pole is thrust into the bottom of the river to ‘set it’ so it will not slip, and then a hand over hand motion is used to push the pole rearward. When the end of the pole is reached is it important to maintain a very firm grip on the pole and pull it back using the same hand over hand motion. The firm grip is necessary because the pole may become stuck between two rocks or in the mud. A weak grip will result in the pole being lost. 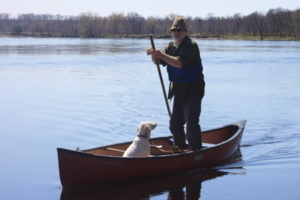 Steering is accomplished by a combination of playing the current and the direction of the pole thrusts. The pole can be pushed right or left, or used like a rudder on the retrieve to steer the canoe. Steering a canoe with a pole has many nuances so it’s easier learned than described.  Traversing a stream is best accomplished by ferrying rather than trying to travel perpendicular to the current. Poling is most efficient with the water depth being four feet or less, but can be in water as deep at 6 feet with a 10 foot pole.  Occasionally, a sudden dropoff will make the water depth too deep to pole. When this occurs, the poler should sit down, grasp the pole in the middle and use it like an extra long kayak paddle. It’s amazing how well this works.

Weight distribution is critical when poling. The downstream end of the canoe must be slightly heavier than the upstream end. Hence, when traveling upstream, the poler should be behind the center thwart, and when snubbing downstream, be in front of the center thwart or yoke.

To line a canoe, a rope, which is 15 to 25 feet long, is tied to both the bow and stern.  Using a reliable knot is critical.  The three knots I use are the Figure 8, a Bowline, and the Lariat Knot. I put a Half Hitch after both the Bowline and Lariat knots to make sure they do not come loose.   One or two people grab the ropes and begin walking upstream pulling the canoe with them. The bow of the canoe must be kept slightly further from the shore than the stern so the current does not push the canoe back into the shore. Steering is accomplished by changing the relationship of the bow and stern to the current. It is much like ferrying but on a smaller scale. Hence, bow in, stern out moves the canoe towards shore, and bow out, stern in moves the canoe away from shore. Lining can only be done when the banks of the river are clear of obstructions.   Lining is also easier when the river banks are at the level of the water in the river. Wide sandy banks are best while, brushy cut banks will not work.

Sailing can be done on those very rare occasions when the wind is at your back. When the voyageurs were able to hoist their sails, they threw a bit of tobacco in the water to ensure that their good luck would hold out.

Wading the canoe is the most miserable way to move a canoe, but sometimes it is unavoidable. While on an 800 mile canoe trip in the arctic, we spent a majority of time during the first five days on the Eagle River wading our canoes downstream because we kept running into stretches of water that were too rock clogged and shallow to paddle. We tied a six foot long piece of rope to the bow and started walking downstream. If you anticipate wading a canoe downstream, wear boots that are made to get wet and that will protect your feet from rocks. I like to wear boots for stocking foot waders with neoprene socks when wilderness canoeing. These boots can handle the wet and are designed to not slip on river rocks and the socks keep your feet comfy even if they get wet. Make sure you have a solid base with one foot before moving the other foot. If not, you may end up face down in the river with the canoe floating over you. Wading upstream is even more work since you are fighting the current.  Again, make sure the downstream end of the canoe is slightly heavier than the upstream end so the canoe will track straight in the current.

By learning and using these traditional canoeing methods, the modern canoe becomes a much more versatile craft which allows the canoeist to go places no canoeist has gone before.