SPRING IS TIME FOR TROPHY TROUT! 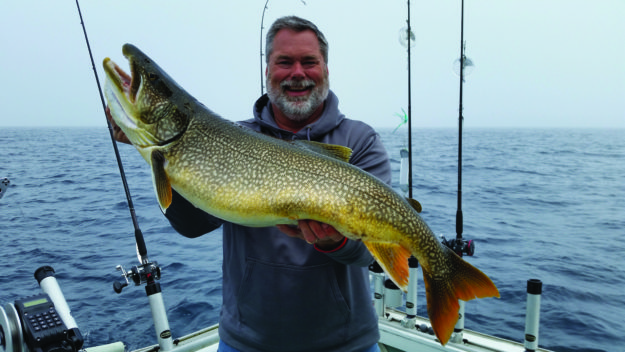 Captain Lee shows an early spring Lake Michigan trophy Lake Trout. Tipping just over 25# it was a great fight and after a few photos was released to grow and give yet another angler a thrill.

Springtime signals the beginning of open water fishing and with the late start to winter and abundance of rain last fall, 2016 will see another early start to one of the best times of the year for trout!  Last fall was a tremendous season for stream fishing with near record rains right up until Christmas. The increased water that stream anglers received from Santa meant high water levels and rivers full of trout!

Tyler Yunk, co-owner at Habitual Guide Service, stayed busy taking clients down streams full of streaking steelhead and busting with trophy brown trout.  With higher than normal water levels, rivers filled with fish and provided an excellent fall fishery and exceptional winter ice fishing for these trout.  But spring means back to open water and the large amount of wintering fish will be joined by even more strains of steelhead entering the tributaries to fulfill their spawning ritual.

Soaking fresh, hand-tied spawn sacs on rigs with brightly colored beads, drifted along bank cuts and deep water pools attract vicious strikes from the powerful steelhead.   Tributaries, like the Ahnapee River in Algoma, wind many miles inland and several feeder streams run into it offering the stream angler miles and miles of productive fishing area.  “We’ve seen steelhead and brown trout holding in deep pools in every stretch on the systems this fall and winter,” noted Tyler Yunk of Habitual Guide Service. Tyler followed by saying, “It has been one of the best fall fishing years ever and also a fantastic winter season; we expect to see the best spring river fishery in decades!”

If you are unsure of the area you are going to fish, try calling Tyler at 920-255-7865 or check out his website www.habitualguide.com  Tyler and his partner Tim will be happy to help you out, they have fishing reports and will show you where and what to look for to make your stream experience successful.

Another sure sign of spring is when I get to roll the boat out of storage and load up the trolling gear and head out onto the lake.  The past several seasons produced outstanding early action on brown trout and lake trout out of the Algoma area.   I have enjoyed this time of year since I first started fishing the lake.  Before I could drive and launch a boat, I would wade from shore and cast for the shallow cruising brown trout with light tackle and small heavy spoons. 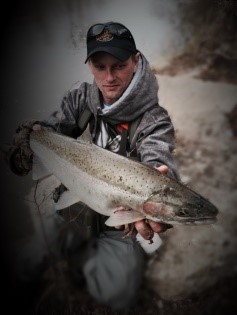 Stream guide Tyler Yunk shows off a beautiful hen Steelhead. On light tackle these fish will give you all the fight you can handle in the swift current.

A few things have changed over the years.  One change has been the clarity of the water.  Since the zebra mussels invaded the great lakes, we have seen water clarity improve 10 fold.  What this means to the brown trout angler since they spook easily is instead of fishing in 6 to 12 feet of water, anglers need to shift outside to 15 to 30 feet of water when water is clear.  This opens up a whole new selection of baits to target fish.  Before, stick baits dominated our selection in shallow water.  Slowing down or turning in the shallows meant using floating stick baits that would rise to the surface instead of sinking into the rocky bottom and snagging up.  Now we can look to other options like spoons and even small flashers and flies to target the browns.

Not only does the deeper water open up the bait selection, it opens up the way we fish for the browns.  Now, downriggers and divers come into play.  Before these options were difficult because of how shallow we were fishing.  This also makes it much easier to place our lures at specific depths and keep them in the “strike zone.”  I also love running slide divers for browns.  By letting out 50, 60 or even 100 feet behind the divers, then setting them, you present your baits not only at suspended depths, but back a ways behind the boat.  Using long leads behind the downriggers will keep the baits a ways back from the boat.  These are great places to run spoons or sometimes a flasher and fly combo. 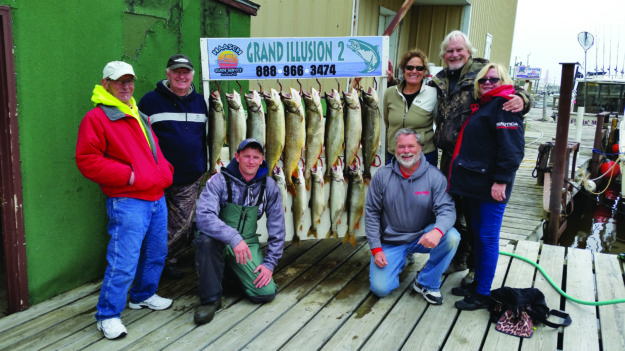 Spring of 2015 was some of the best Lake Trout fishing that I have seen in many years. Expect more of the same in upcoming springs with the ample food source in shallow water.

Planer boards still play a big role in brown trout trolling.  Just as in the shallow waters, planer boards enable the angler to place baits wide from the boat and in front of browns that spooked away from the path of the boat.  These wider spread lures tend to run shallower to target the more aggressive browns cruising higher up in the water column.  This is also a great place to run some stick baits.  Inner boards will often get large lipped deep divers or husky jerks on shorter leads and outer boards will often get floaters with longer leads.

Over the years we have seen the alewife population decline sharply, largely due to the impact that the zebra mussels have played by filtering the water and eliminating the small organisms that the alewife feed on.  At the same time, the habitat that the zebra mussels created on the bottom of the lake became inhabited with the round goby.  This small invasive fish preys on zebra mussels and in turn has become a favorite snack of the brown trout and of late, lake trout as well.  With this abundant food source near shore, the browns and lakers have become active near-shore feeders and have provided a great early season target for small boat anglers.

Some of my favorite spoons for brown and lake trout are the smaller lighter spoons.  A couple that occupy the working side of my fluorocarbon are the R & R Razor Spoon in the froggy patterns especially the Albino Frog and the Warrior Flutter Spoon in the perch patterns, my favorite here is the Blue Perch.  In the springtime, browns cruise the shoreline hunting for tasty meals of gobies and occasionally smelt and alewife.  Baits imitating these tasty meals, not only in action, but in color patterns, will often lure the trout to your net.  One of my “go-to” goby imitators is the black & gold Flicker Shad. 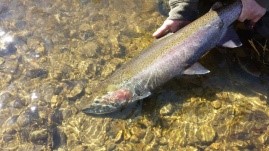 Watching a powerful Steelhead revive and swim away after an epic battle is in itself a rewarding experience!

Another important aspect when targeting spring trout is paying close attention to water temperature.  Areas with slight increases in temperature, as little as a degree or two will tend to attract more bait and thus more active trout.   Some of these patches of warmer water are areas that contain water that is slightly cloudy or dirty.  The cloudier water tends to absorb more sunlight and warm faster than the clear water.  I like to mark these areas and make several passes through these spots, often producing several strikes with each pass.

A bonus in the spring is the steelhead.  Steelies are known to travel the shallows in the spring feeding on the abundant bait after returning to the lake from their spawning runs up the tributaries.  Steelheads seem to take a liking to orange baits.   R & R Flamethrowers and Warrior Flutter Naughty Natalees are a few of my favorite early steelhead “go-to” baits.   Trolled the same way and in the same places, that is why I consider them the bonus fish.  Not only are the lake trout caught in the cold spring waters great table fare, but when you get a fish on, you never know what it will be.  I’ve even taken a few kings in the shallows on light line.  What a fight that is!

That brings up a third point with the water clarity – stealth!  Not only do we need to be cautious to keep our tackle light, but 8-12# fluorocarbon is a must for leaders and I spool my planer board rods (7’6” Ugly Stick GX2’s)with Abu Garcia Alphamar 16LC reels filled with 40# Trilene  Braid and add 8# Trilene 100% Professional Grade Fluorocarbon leaders.  My downriggers are running straight 8# Trilene Fluorocarbon.  With the gin clear water, every little bit helps, and with careful preparation the bonus is that chunky, silvery, football shaped brown tugging at the end of your line!

TIP OF THE MONTH

Springtime fishing means 2 things, cold air and cold water.  Both of these can make for a deadly combination if you are not prepared.  Wearing a floatation jacket, such as the one from Onyx, combines a USCG-approved Type III PFD and a comfortable, fleece-lined, warm wearable floatation jacket for all-day wear.  Many anglers fail to realize that even fishing short distances from shore can make reaching the shore difficult in sub-40 degree water.  Wearing a floatation jacket can make all the difference and keep you warm on those cold mornings!  Safety first means more fish later!