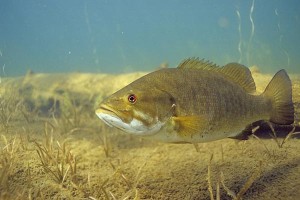 Smallmouth Bass are one of the hardest fighting freshwater fish

I just got back from a little weekend getaway with some friends up in Door County, Wisconsin where we did a little drinking, some relaxing and of course, some fishing. I’ve been up to the bay of Green Bay several times at Peninsula State Park in Fish Creek, WI so I knew where to go, and it payed off. We caught many rock bass and a lot of smallies. Small Mouth bass are, in my opinion, some of the hardest fighting fish in a freshwater lake. Growing up in the Midwest has given me the opportunity to catch and see some great fish and I wanted to put out there what I thought were the top 5 hardest freshwater fighting fish there are.

Keep in mind, this is all in my own opinion of what the hardest fighting freshwater fish are. All you saltwater fishermen out there, we all get it, you catch big fish and you’re in the ocean. The lakes and rivers of the U.S. offer phenomenal fishing though and these are the hardest fighting fish pound for pound.

1: Small Mouth Bass- I think this fish fights harder than any other on a weight scale basis. I realize that a large northern pike puts up a bigger fight than a 16-inch smallie, but if you find a 20-inch small mouth bass, you may think you hooked a shark 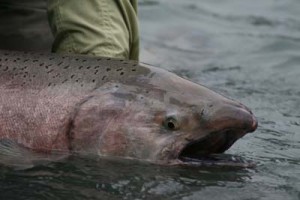 Catch a King Salmon and you’ll know it right away

2: King Salmon– King salmon fight so hard when you hook them and I’ve been lucky to fish for them in Lake Michigan and in Alaska. When you hook a King on the Kenai River in Alaska, you better hold on. Kings are big and muscular and they are also incredibly fun to catch.

3: Northern Pike- Northern are big fish and they put up a big fight. I’ve caught plenty and so have my friends that I’ve been with and it’s not uncommon to take a longer time reeling in these bad boys. There is nothing like a Fall Northern Pike fishing trip to make your arms tired and these are by far, my favorite fish.

4: Musky– Muskellunge are massive fish and incredibly hard to catch. Musky fishing in Minnesota and Wisconsin is insanely popular (and other places as well) and there are a lot of these fish. Musky are gigantic and put up a huge fight when you finally hook into one. A trophy Musky is usually 50-inches long and if you get into a giant musky, you have found a massive fight.

5: Largemouth Bass– Largemouth Bass are great fighting fish and some may say the king of the sport fish. I love bass fishing and love catching largemouths. Not only are they common and I seem to be able to catch a lot of them, but they are quick to get in and out of boats and a whole lot of fun.