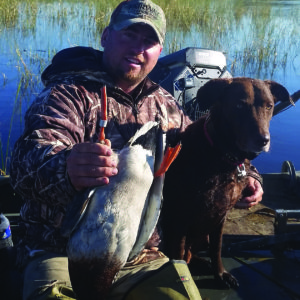 From divers to puddle ducks, Wisconsin offers a wide variety of ducks to chase, and I’m going to give you some tips on how I’m able to finish ducks in many different situations. These different types of ducks can be found from dry land fields to shallow marshes, or even out to the depths of the big lakes.  With each species targeted in a total different presentation and location, you could end up accumulating as much equipment as a farmer would have.

Among the puddle duck family, the popular mallard offers many options of approach throughout Wisconsin’s 60-day season.  When dabbling in the shallows, the mallard, along with other puddle ducks, will be eating any fallen weed seeds.  But, a puddle duck’s favorite food is by far rice and stick-tight seeds.  A shallow water duck skiff and a small amount of puddle duck decoys scattered out in the standing rice is a stealthy and effective way to get in on some amazing mallard, gadwall, pintail, and widgeon hunting.  There have been countless hunts where I paddled deep into a foggy cattail marsh to a patch of wild rice and waited for what seems like an eternity for the sun to come up and burn off some fog.  Hearing all the splashing around me in the weeds from the puddle ducks feeding has the anticipation on the rise for my four-legged furry friend, Riley and I.  You know you are in puddle duck heaven when they are splashing and eating within a “stones throw of you,” but you can’t see them on the water because of the dense wild rice. The sounds of their wing beats and splashing as they back pedal down into small pockets in the tall cover is very intense as we wait for the first daylight. With our skiffs hidden well in the wild rice, back pedaling mallards offer nice close decoy shooting.  Dog work is a must, as most retrieves are blind due to the tall rice stalks that are well over head height. 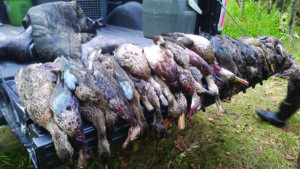 Finishing a flock of 500 to 1,000 dry ground feeding mallards will put a head rush on any veteran waterfowler even after bagging a lifetime of fowl. Scout, scout, scout, and scout some more. That is the only way I find the tornado effect of mallards working a certain spot in a certain corn field. After finding the location that the large flocks work their way around, known as the “X.” I then try to figure out wind and terrain for the perfect setup. We then deploy my trailer full of layout blinds, full body mallards, and a number of motion decoys. I remind my fellow hunters each time to look close in the massive flocks for the odd black duck or pintail, because with a six duck limit, only four can be mallards.  We lay and wait with our backs to the wind, excited amongst the large spread while lots of mechanical decoys make motion.  I’ve shared numerous days in the spread with many different duck hunters that we will never forget. With orange feet and green heads swarming around us like a tornado, I usually hear a quiet whine coming from Riley’s blind right by my side.  At the same time usually, single ducks are plopping down and pecking through the husks for corn kernels, close enough that they can hear Riley’s tail thumping inside her blind.   Large numbers of mallards swarming around our spread at once makes it hard for me to give the command for the group to pop up and shoot because it’s an experience that a serious waterfowler really doesn’t want to see end.

Unlike puddle ducks, hunting for divers is usually done on bigger water. The open waters of Lake Michigan and bigger inland waters like Winnebago, along with many others, hold acres of rafted resting divers. These ducks dive completely under the water in search of food such as plants, fish, snails, and mussels.  I generally put out around 100 black and white decoys of various diver ducks to make it look appealing from a distance. 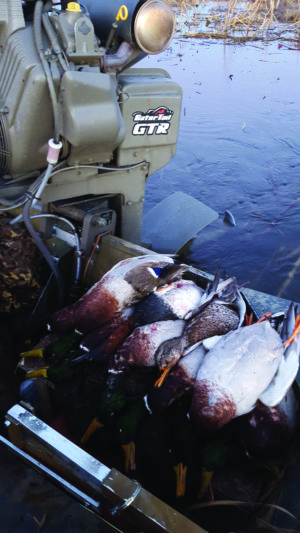 During an open water layout hunt, I will anchor two small layout boats and cover them with long strings of decoys.  These ducks are very fast, strong, and can swim under water for quite some distance.  Strong winds can keep these birds in the air, which helps hunters get multiple opportunities from many different flocks.  With the combination of waves, wind, and the strength of a diver, such as a canvasback, you can be in for a really fun challenge while gunning out of a layout boat. Late in season, I often end up breaking ice to get out to the middle to find an ice-free area for our setup.  During the weeks of heavy migration, it is common to see swarms of diver ducks moving south through big water areas.  These migratory diver ducks will often drop in just to buzz through a large decoy spread set out in the open water. Diver ducks are known to bomb through a decoy spread and sound like fighter jets as they rip through the sky. With our barrels pointed at least ten feet in front of the lead bird, guns start blazing, and still we drop ducks in the middle of the pack.  A major part of bagging these heavily feathered ducks is to reload immediately and get the bead right back on them, as they can quickly dive, never to be seen again.

Waterfowl hunting is by far my favorite sport because of the hard work of scouting and training finally coming together. A sincere waterfowler is still involved with the sport throughout the off season as well. Training for blind retrieves and hand signals, putting up wood duck houses, and painting decoys keeps me in the game for most of the year. From managing to fundraising and building habitat, a waterfowler is the most dedicated hunter helping the nation enjoy the sport.