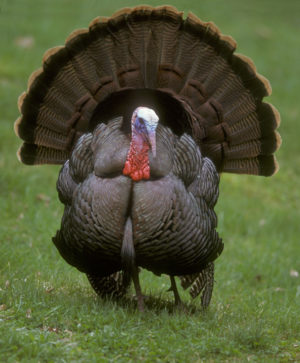 The gobble startled me as it shattered the pre-dawn silence. A few soft hen yelps from my slate call had incited the response, which in turn excited me. It was the first morning of my spring turkey season and it now seemed as though it might be a short one as I knew I had a tom close by, easily within 60 yards. As I impatiently waited for light, I couldn’t help but to throw out a few more soft calls- each call being answered by a booming gobble. I know many “experts” would say to avoid calling too much to a tom on the roost, but for me, gobbling was the kick that made spring turkey hunting so special.

First light came and went. But the tom remained roosted somewhere just out of sight down the field edge. He was most likely in a large white pine which served as a favorite roosting tree. Finally, the flapping of wings signaled his descent into the field to begin another day of strutting, gobbling and searching for hens. He glided about 150 yards out into the field and began walking, pecking the ground as he did. I tried a series of soft yelps and purrs which prompted another gobble and a brief display of his fan. Unfortunately, he seemed intent on walking up a small rise in the field. Once he reached his destination, he puffed himself into full display and, with a very distinctive thick beard, strutted back and forth in full glory along the rise, every so often letting loose a gobble.

I was still confident that it was just a matter of time before he would notice my decoy positioned in the field twenty yards from the woods line where I was concealed under the spreading branches of a large white spruce. My confidence was shaken, however, when I heard yelps from over the rise and across the field. Eventually, the tom started moving in the direction of the yelps. I tried to persuade him with a variety of calls, but he quickly disappeared over the rise. It can be hard to compete with real hens, and after no sign of him for a half hour; save a few gobbles from the other side of the field, I figured that was the end. I never imagined that in fact it was only the beginning.

Over the rest of my week-long first season, I had several more long range encounters with the thick bearded tom whose gobble I had come to distinguish from other toms in the area. Though he was often quick to respond to my calls, he never showed any real interest in coming in to my decoys. I took this indifference as a slap to my hunting skills and he soon became my single target, my “white whale.” As my first season ended, I had several toms that I passed up, but “my tom” had eluded me. I still had tags for two more week-long seasons, and felt confident that sooner or later he would be mine.

That feeling of certainty was starting to fade by the middle of my last season. Though I had heard him almost daily, I had not even caught a glimpse of him over that time. He had taken to the woods and, as far as I could tell, was rarely in a field. I likewise had changed my tactics and was trying to position myself in areas of the woods where I heard him gobbling. He seemed to have a pattern of moving along a trail that ran through one section of woods toward a small field that was tucked into the woods. 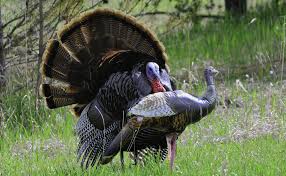 It was there that I found myself early in the afternoon of my last day of spring turkey season. There had not been any gobbles since early in the morning and I was dozing in the warmth of the mid-May sun. Suddenly, I was brought out of my impending slumber by a gobble. For a few moments I was thinking maybe I had just dreamt it, but then another gobble rose above the sound of the wind rustling the freshly hatched leaves. It wasn’t just any gobble, it was that gobble. A series of seductive yelps brought a response that told me he was in the direction of the small field but not in it.

The gobbling continued sporadically for the next hour as he seemed to move around me but never really got any closer. I was tempted to try to move in on him, but experience had taught me that that was usually a recipe for scaring away the bird. I sat tight and eventually the gobbling ended. As the sun sank on the horizon, my season drew to a close with my tom still somewhere out there.

When you are a child a year seems like a lifetime. For the rest of us, a year has a way of passing like a summer day. Soon I found myself looking forward to another turkey season. This year I only had one tag, so my season would be limited to a single week.

A few days before my season was set to begin, I went out early one morning to see what type of gobbling activity I could hear in the woods and fields around my house. There was assorted gobbling in just about every direction as the dark faded into light. Just as the sun was creasing the tops of the trees, I heard it. That gobble. I had long since moved on from the quest to get “my tom” last season. He had won and I assumed it was likely that a fall hunter, a predator, or an unusually harsh winter had taken him. But there he was. His gobble had awakened my memory and there was no doubt it was him.

Unlike the season before, he seemed much quieter this year. I never saw him and only heard him twice over the first five days of my season. Maybe the winter had been hard on him or maybe he was no longer the dominant bird I saw on that small rise the year before. It didn’t matter why, I just knew that I missed his gobble.

Early in the afternoon of the second to last day of my season it began to rain, light at first but steadily increasing in intensity. I decided to go to my rainy day spot, protected under the spreading branches of the big white spruce where I had first seen my tom. It

had been one of those days, little gobbling in the morning and none since. I had not seen a turkey all day. It had been a fairly uneventful season and I was losing my drive to keep going. A hot shower and warm meal was sounding very good about then.

I convinced myself to stay until five o’clock.

A little after four, as I stared blankly into the field, out of the corner of my eye I caught the unmistakable jerky movement of a turkey walking along the edge of the field to my right. With a shift of my eyes a hen came into view about thirty yards away. She seemed to be walking right towards my decoy. As my eyes followed her, I again caught movement to my right. My eyes shifted and there he was. There was no mistaking the paint brush thick beard which hung almost to the ground.

I had positioned the barrel of my shotgun on my knees and secured the butt of the gun on my shoulder. The hen passed into an opening in the spruce branches directly in front of me no more than fifteen yards away. The tom was following directly in her wake. The screen of spruce branches made them oblivious to my presence.   Now it was just a matter of a couple of feet. There he was. 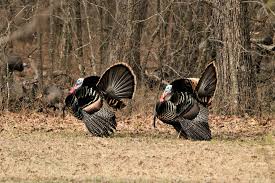 “Boom!”   At the sound, both turkeys’ heads raised. “Boom!” As my voice reverberated a second time across the field the turkeys clucked excitedly and half running, half flying made their way to the top of the rise in the field and disappeared.

Back under the spruce, I contemplated what had just happened. I hadn’t planned it that way. It was just the way it worked out. Up until the moment I first yelled, “Boom!” I really thought I would get my tom. The safety was off, my finger was on the trigger. I just couldn’t squeeze it.   And I knew why. I had total respect for that bird. If he was going to die, he deserved to go out in full glory, strutting and gobbling like the first time I saw him. He didn’t deserve to be ambushed like he was set up to be. Besides, the woods and fields in my world were more interesting knowing he was still out there.

The next morning I took a jake. It may have been one of my tom’s offspring, ensuring that we would have turkey for the table.

Though his paint brush beard and tail fan cannot be found in the room where I keep other mounts of birds, fish, and deer, my two year tom can be found with so many other trophies in the corners of my memory. Those are the trophies I find myself revisiting most often.