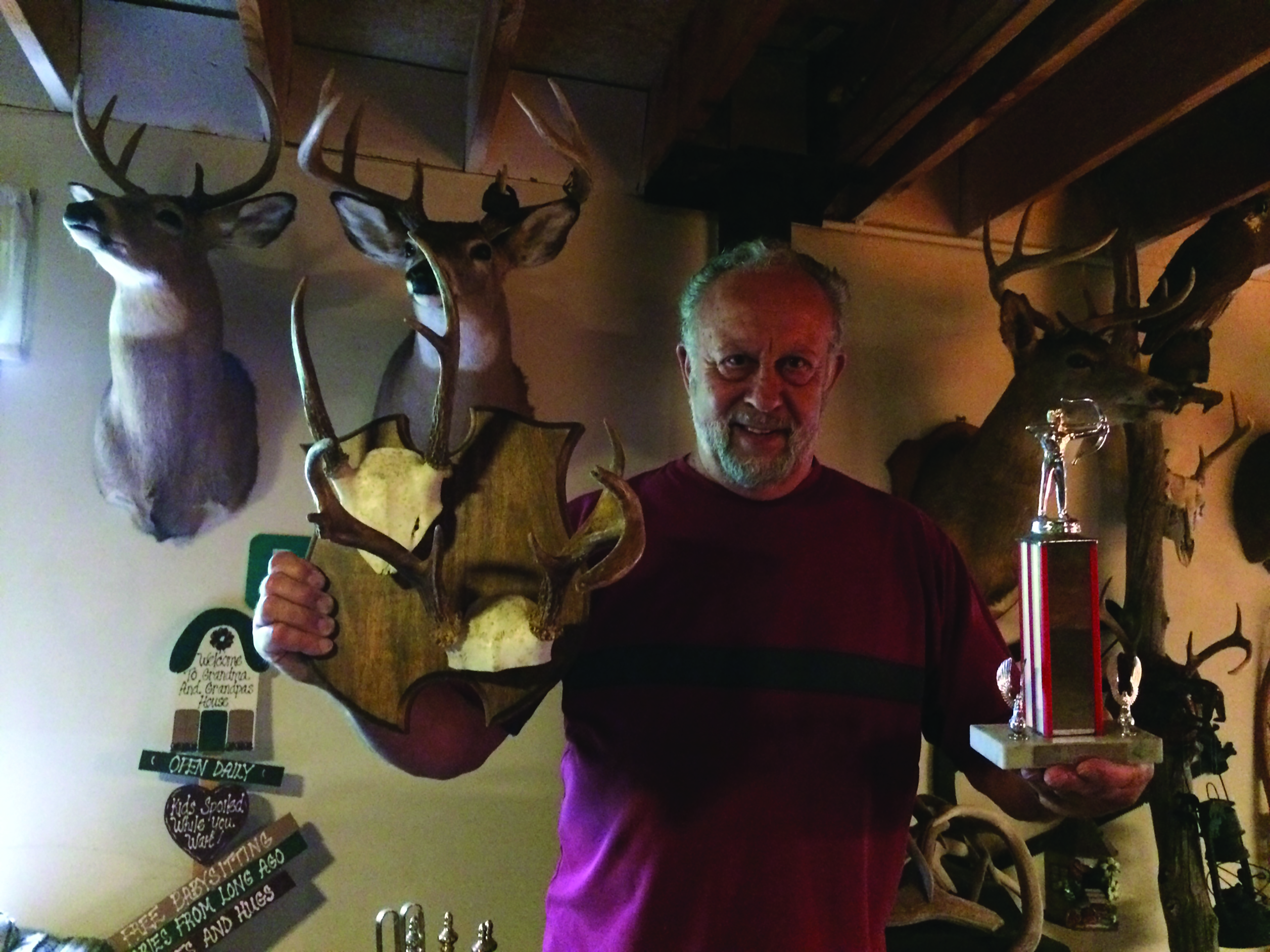 My parents live in a nice house on a stunning piece of property situated along the Bark River in Delafield. There is much to love about this abode and the several acres it sits on. The outside has a beautiful river for grandkids to frolic and fish on hot summer days.  The inside boasts a large recreation and trophy room with ample space for family gatherings, a bar with a keg on tap and a pool table.  I know what you’re thinking: Why would anyone ever leave?

In addition to countless fish, the “trophy” room includes a dozen deer shoulder mounts and more than 50 mounted racks, some of them two or three to a single plaque.  That ought to give you an idea of just how “massive” some of those bucks were.

A few weeks ago, my dad and I were in the trophy room having a few beers and playing pool.  At one point Dad went upstairs to take a phone call, and I found myself alone for a few minutes.  It’s easy to kill time there just looking at the racks, mounts, fish, hides of various fur bearers and a plethora of outdoor gadgets and accoutrements.

As I scanned the room, my eyes were drawn to a pair of actual trophies on a shelf behind the bar. My dad won the taller one for garnering the top prize at an ice fishing tournament on Pewaukee Lake 35 years ago. He was awarded the other for winning the “Big Buck” contest in 1972 at Broken Arrow Archery in West Allis.  His winning entry was an 18-month old, scraggly looking seven-point buck.

When my dad returned, I pointed out the “Big Buck” trophy and the “trophy” rack of the seven-pointer that was mounted with another small rack on the same plaque.  I told him that I vividly remember the excitement in the house for the three or so months he was leading the contest (he harvested that buck in September) and the elation we felt when he actually won once the season ended on Dec. 31.  He said that when he was finally declared the winner, the owner of Broken Arrow told him he could either have the trophy or a dozen arrows.  I asked him why he chose the trophy. He said, “Well, I still have it.  If I had taken the arrows, they would have been gone in a year or two.”

As we reminisced about that trophy, I realized I knew absolutely nothing about the details of the hunt that led to Dad taking this buck. I wondered if, 43 years later, he would be able to recount the details.

He told me that he was hunting near the town of Ogdensburg, Wis.  He said he had gone hunting for the weekend with two of his buddies and that they had camped in an old green Army tent that didn’t have a floor.  He said the wind was blowing 30 miles per hour and that he was sitting on the edge of a clover field in a large oak tree that he climbed without the aid of a climbing stand or screw-in pegs or anything else – since none of that existed yet.  He said he stood on one branch and held on to another as the wind tried to blow him out of the tree. He said that he had one arrow nocked and another stuck between two branches so that he’d be ready for a second shot if necessary.  He told me that soon after he set the reserve arrow down, a wind gust blew it into the clover field.  Shortly thereafter, a young spike approached but spooked when he saw the arrow in the clover.  Five minutes later, the seven-pointer came out, and Dad made what he thought was a good hit.  He and his buddies tracked the deer that night for 200 yards to a black-top road, where they ran out of blood. 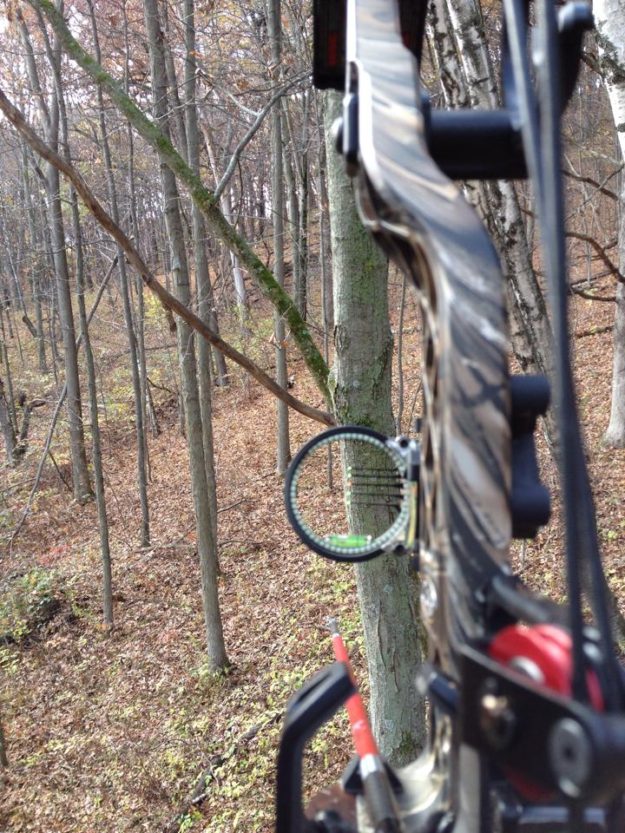 The next day the three of them returned after the morning hunt but still couldn’t find the deer.  After arriving back at camp, my dad decided to go back out alone to continue the search and, after a few hours, he finally found the buck on the far side of a pond.  He said that when he gutted that deer, it was still warm, indicating that it probably had just expired.

I was amazed that this 75-year-old man could recount every last detail of that hunt.  I asked whether he could do the same for some of the other deer hanging on the wall, and he replied, “Absolutely.  Every one of these racks has its own story and every one of these ‘trophies’ serves as the foundation for a unique and, God willing, lifelong memory.”

We begin each season with a harvest plan that is based on a consumption plan. Simply put, we only shoot what we actually are going to eat or give away to family and friends. This year we have decided to approach the season with a whole new plan.

On the ride home from my dad’s house, I called my brother, Joe, to discuss our harvest plan for the 2015 archery season. I told Joe about the conversation I had with Dad regarding the trophy and the seven-pointer.  He, too, was amazed at the vivid recollection of every last detail of that hunt and every other hunt associated with both the metallic trophies and those adorning the walls.

Joe said, “You know, I, too, can recall every detail of every hunt I’ve ever been on – even the hunts where I never killed or even saw a deer.”

Before that phone call ended, Joe and I decided that this year, in addition to our harvest plan, we would implement our own version of a strict QDM program – a program that would ensure trophies are created during every hunt for every hunter.  We decided that neither family nor friends could hunt our property unless they agreed to participate in our Quality Deer Memory program.

We will require our children, our father, and anyone else who hunts our land to document their fondest memory of each hunt.  We will keep these quality deer memories in a book at our cabin in Neshkoro, and we will add to that book after every hunt with the intent of creating a trophy book of awesome memories for generations to share.

I’m hopeful that some of these memories include the harvesting of mature whitetail bucks.  But harvesting nice bucks is not the most important reason we give so much of ourselves to this sport.  In the end it’s not the trophy on the wall that matters – and it’s not the prizes and accolades we might receive for winning a big buck contest.  The trophies on the wall or the shelf only serve to jog some awesome memories of past times hunting with friends and family in beautiful settings that our amazingly awesome God created for us to use.

May that same God bless you and yours as you create your own quality deer memories during the 2015 season and every season thereafter.