It wasn’t until I moved to the Northwood’s of Wisconsin, in my early 30’s, that I learned about the significance of the “fishing opener.” Having grown up in Fond du Lac, WI I don’t recall having any specific time to start fishing or stop fishing. Well, “Up North” it’s a big deal! I would start the week of, getting rods and tackle cleaned and ready to go. My fishing mentors, who were “locals,” having grown up in the Northwood’s, knew all the ins and outs of the area. I was very fortunate to have been taken under their wings.

The festivities would officially start with a Friday night Fish Fry at Bosacki’s Boat House. Later, we’d spend the next few hours getting our rods and tackle ready for the official start one minute after midnight, with walleye being our target fish. Then, at 11:30 pm we’d head back to Bosacki’s to fish off their pier. After an hour or two, we’d head home for a short snooze. I don’t recall ever catching anything, but I think it mostly was about the ceremony of it all. That and when asked, we could proudly say we fished right from the start.

At 4 am we’d rise again, grab our trout gear and off we’d go to the “secret lake.” It was a race to get there to beat any others to the prime shore spots. It was a very exciting time. Still within the dark of morning, we’d quietly unload our rods, tackle, small cooler and thermos. Waders or hip boots were optional. Two other staples I carried in my pockets were Swisher Sweet “woodies” to ward off the gnats and of course a few pieces of Lake Tomahawk beef jerky to ward off my tummy rumbles guaranteed to kick in an hour into the morning.

So, off we’d go through the woods to the lake, speaking and laughing in whispers. Inevitably, our trek to the lake would be halted due to someone’s rod or line getting tangled in the brush. Much of the time it would take the help of others under the light of a head lamp to untangle the mess. Tempers would sometimes flare over this because it would delay getting to the shore, which could mean not getting the good spots, even amongst each other. Once reaching our spots we’d impatiently wait for the legal time to fish.

Dawn would slowly gain on the darkness one shade lighter with each move of the minute hand. The air cool and heavy with mist lay thick across the glassy water surface. Breaking the quiet stillness, were peepers ringing their hypnotic cadence, a distant robin and more loudly, a pair of loons exclaiming their irritation with our intrusion to their nesting place.

“What time is it?” I’d whisper as loud as I could, not wanting to cast too soon for the official 5:27 start of Trout Season. “5:24,” Tami would whisper back. My eyes could now see the opposite shoreline and begin to make out others who clearly beat us there. The smell of their campfire smoke wafted to my nose reminding me of the savory jerky I had in my pocket making my mouth water followed by stomach’s first hunger pain. I knew better than to indulge in a piece, because at any minute I’d need to be making that first cast thus needing both hands to fish.

I could hear the whistling wings of a pair of ducks whiz past somewhere near, but still lost in the fog. My mind drifted back to last fall standing in a cornfield goose hunting and hearing the same sound. Suddenly, the button click of a Zebco 33 Classic snapped me out of my pleasant memory, signaling it was game on! Tami, the only one with the watch would get the jump on the fish. I could hear the splash down of my clear bobber after my cast, but had no idea where it landed due to the fog. I began to slowly turn the handle on my rod keeping my line taught to feel any bite. And there it was! The tap-tap-tap of the first hungry trout. With a quick hookset, the surface of the water erupted with the very thing I had been waiting for all week. FISH ON! Off in the distance I heard my other pal, Tess, cuss at me for being the first to hook up. 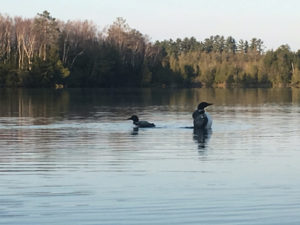 Just then my first catch finally revealed itself with a leap into the air. It was a beautiful brookie, writhing and rolling to get free. If I wasn’t careful, it would! Quickly I suppressed it, remove the hook and measure it against the legal length marks I made on my cooler lid. With a joyful smile, I placed it into the cooler and added another red worm to my hook to cast off again. The sun was now forcing its light through the trees, the fog beginning to lift. The irritated loons took off across the water surface, fighting gravity to become airborne. It would take them 3 laps around the small lake to get enough height to clear the trees. I watched in amazement at their size and grace, a little sad in knowing it was likely our company that ran them off in search of a quieter place to be.

And, so it went for the rest of the early morning, the hushed enthusiasm of my fellow anglers and the sound of splashing trout. This moment in time forever frozen in our minds and hearts.

As the sun rose higher, there became fewer splashes from trout. Our hungry bellies would finally convince us to give up and head to the little café down the road where there was hot coffee and bacon. Over our breakfast we’d share our stories of what took place on our piece of shoreline that morning. We also planned for the afternoon’s fishing. On Sunday we did it all over again.

For years this is how it went for the opener. Some openers it was really cold. Some it would be raining. Others it would snow then rain. Once, I smartly planted a hook into my index finger. I said nothing, ripped it from my stretched out flesh and kept fishing. Another time I fell over backwards in my waders, filling them. I scrambled to shore with the 14” brookie still safely in my net. It now hangs on my wall as a reminder of that time and place. (Editor’s note: See page 52 to read about the best way to preserve your trophy for the taxidermist.) We endured it all, and all for the love of fishing. It’s these memories we hope to be able to recall when we’re no longer able to get to the good spots.