The Importance of Catch and Release 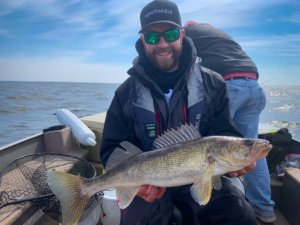 Once thought of as an attitude of the musky and trout anglers, catch and release is becoming a common theme throughout the fishing community. Fishing purely for the fun of it, is a significant shift from the attitudes of our forefathers, who have historically spent their fishing time working to fill limits.

While there is nothing wrong or illegal in keeping limits of fish, one should question whether or not mass quantities of fish removed from a lake is beneficial to the system itself. It is more important now, than ever before, that anglers realize how important certain fish are to the overall health of the fishery.

With the significant advances in fishing technologies, it is more important now to release some of the fish we, as anglers, catch. A lot has changed over the past couple decades, and fish in general are much easier to locate than they were previously. Efforts to find and catch fish have been drastically reduced by things such as faster boats, high end rods and reels, more tackle options than any angler could want, and most importantly advanced electronics.

Panfish in particular are of major concern. They are often looked at as a readily renewable resource. It’s not uncommon for fishermen to keep limits of panfish night after night. Additionally, anglers often underestimate the importance of large panfish, such as bluegills and crappies, and how their removal can negatively impact a fishery. Most areas of the country do not have size limits that protect larger panfish. It is often up to the discretion of the angler, and as a result can have some adverse effects. The removal of a few large bluegills or crappies from a population has the potential to be far more detrimental than removing a larger amount of small panfish.

While most gamefish species have strict size limits that prevent large fish from being kept, it is still vital for anglers to recognize which fish are important to a given fishery. Keeping larger fish or large quantities of game fish, may have unfortunate consequences for a population as a whole. Fish managers typically work to protect certain year classes more than others, but often look for a balanced population.

The importance of catch and release is real. It is vital that anglers as a whole work to preserve fish populations for future generations. On your next outing, take a moment to think about how keeping a given fish may impact a fishery over the long term. Think about the overall health of the fishery, and how you’d like it to be preserved for generations to come.