THE ULTIMATE PATH TO AN EPIC FAIL

The ultimate path to an epic fail begins with more preparation than you could ever imagine. It begins early in the spring with testing soils, tilling ground and planting food plots throughout the property. It involves moving dirt with a skidsteer to find the right spot for watering holes to hold the deer. It takes days, nights, weeks, and months of scouting trails – setting trail cameras for when you are not there, and using spotting scopes from afar when you are. It takes hours of prepping and setting ladder stands and quad-pods in locations that will offer the opportunity for a perfectly placed lethal shot at some point during the season. There is time spent snipping branches with the pruning kit to eliminate the possibility of deflected arrows.

When the season nears, you begin your final prep work: brush hogging trails and mowing food plots so they are fresh for the season; hanging branches to offer concealment so the deer feel safe enough to come out during shooting hours; putting finishing touches on the practice shots with my compound and crossbow so I am confident when I pull the trigger. The time is now and I am READY!

The season opens and I have 13 different bucks and five does (two with fawns) hanging on my property. Three shooters and one granddaddy of them all! He is where my sights are. He is my inspiration to hunt. I have watched him for four years and he is ready this year! Well outside the ears, 8-10 high and good mass. Dark coat and a telltale white flag of a tail, even at total comfort and at rest. He is mine. I will not rest until there is a winner, but the question remains – will it be him or me?

On the Sunday night of opening weekend I hit my stand on the edge of the wood line with a food plot down and left 15 yards. I chose this stand because it is early-season and the deer are still in the fields eating corn, beans and alfalfa. They are grazers – and very unpredictable. The time rolls around to 7 p.m. and there they are. I have eight bucks about 300 yards in front of me a few strips away. I have a 75-yard strip of alfalfa, followed by another 75 yards of beans, then more alfalfa, then corn, and so on. Due to the hills, we do a lot of strip cropping here. These deer are at the alfalfa and corn. Two smaller bucks are practicing their sparring and the six bigger bucks are a lot like me – they just want to eat. THERE HE IS! I see him. He is with this bachelor party and he will be for a few days, but I need to pattern them now before the rut comes and they split up to dominate different areas.

I head back on Monday night and the deer do the same exact thing. They hit the edge of the corn and totally avoid wood edges. I have an idea! I will grab my Tenzing TZ TP14 turkey pack along with my turkey decoys, cut a slit in the corn and sit in my ghillie suit amongst the corn where the deer will be. Ambush-style. I know they will be right on my lap by the time I see them and there will not be much time so I decide to use my crossbow for this encounter. The turkey decoys are set to buy me a few extra seconds by hopefully distracting the deer just enough. And my shooter buck is usually at the end of the line; he is never first.

I sat there until dark. In 83-degree weather. In a ghillie suit. In the middle of a standing cornfield. No breeze. Sweating profusely. Without seeing a hair. I was disappointed that my plan didn’t work but glad that I tried. I picked up my pride and walked slowly to the edge of the corn to retrieve my decoys. And there they were! All I could see were the racks grazing through the bean field 150 yards in front of me. I don’t know how long they had been there. I waited until it was dark enough and the deer had moved down the way enough to retrieve my decoys and slip out of there without spooking them. So, what was it? The turkey decoys? Is that why they didn’t come all the way up to the corn? Is it simply that they wanted beans? Whatever it was, they won that round. 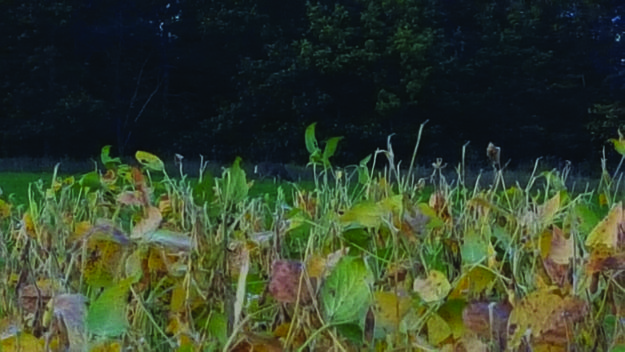 After being outsmarted by these deer for several nights, I think I got ‘em figured out. It’s now Wednesday. I will set my decoys in the same spot as before. I will go with my Tenzing turkey pack and sit in the middle of the bean field in my ghillie suit with just my eyeballs looking over the stalks. I’m still with my crossbow, a quick projectile. And I am in the middle of nowhere with nothing around me. It truly is me versus them. Here we go!

It is 6:30 p.m. and 85 degrees. Again, I’m sweating in my ghillie suit, sitting on my turkey pack in the middle of a bean field. Suddenly, two does appear. I haven’t seen a doe with these bucks in a few nights and I am thinking to myself that they have eluded me again. I watch as they graze the alfalfa field and decide to check out the field line with my optics just to make sure nothing is creeping up on me. There the big boy stands, five yards in the tree line, checking out the situation. He stands there with no movement whatsoever, but it is definitely him! After what felt like an eternity he enters the alfalfa field and starts grazing with the does. I am thinking to myself that this is going to be impossible. I have no cover, and even though I use cover scent, I am sweating like a pig and the wind is at my back blowing right their way. I crouch down as low as I can go but I still need to be able to see them. I am scanning all directions looking for the other seven bucks that have been with him every night. WHERE ARE THEY? Out comes another buck – a two-year-old 8 with the G2 and G3 busted off of his left rack. So now I have four deer – two bucks and two does – right in front of me eating alfalfa and they are about 60 yards away. I keep thinking: Should I crawl through the beans? Should I shift right because they seem to be sliding to my right? A couple of minutes go by and it is starting to get close to closing. I have about 10 minutes of shooting hours left and they are just taking their merry ol’ time grazing in the alfalfa.

He sees something! The big boy stops eating and is staring my way. Is it me or is it the decoys? I have 70 yards directly behind me. What does he see? What is he staring at? Then he’s walking my way! This is going to work! I crouch down as far as I can, ever so slowly, and all I can see is the rack coming at me over the beans. He is still coming! When should I raise my crossbow that has been at the ready on my knee this whole time? I better do it now! He stops at 30 yards and just stands there. Remember, I have a wind from my back. When is he going to smell me? Why did he stop? What is he looking at? Me? Decoys? What time is it? He is quartered at me. COME ON. TURN RIGHT A BIT MORE! I can tell he is getting antsy. Something is not right and he is going to bolt at any second. COME ON, TURN! 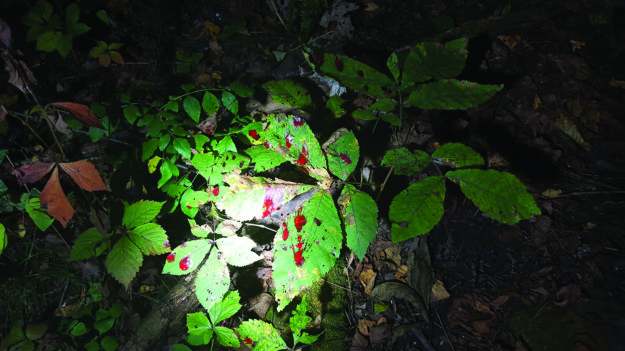 He starts to move and I pull the trigger. Did I jump? I heard a thud so I think I hit him; I couldn’t have jumped. He geared up to take off when I moved slightly for the shot. It looked like he crouched down and back when I let the arrow fly. I didn’t see the bolt fly. Breathe, Pat! He entered there next to that little tree. Wait, I wouldn’t have seen the arrow because it flies too fast. I could never see the arrow during target shooting. Settle down, Pat. Okay, go into the field and look for blood.

I have blood! Good blood. I follow the blood to the trees and stop. I am not positive of the hit because I did not find the bolt like I would have if it were a cross-through. I think it is a shoulder shot due to his angle and the fact that he crouched down and back when I thought I had a good shot. A perfect shot placement, until he jumped my shot! I have blood at the end of the field entering the woods. I will hang my hat right here, go back to get help for tracking and dragging, and let this deer sit for a few hours to die.

Two and a half hours later, I enter the woods with two buddies. It looks like we could come upon a piled-up deer at our next step. There are pools of blood everywhere and we have no problem following the trail. We find the back half of my bolt, confirming my thoughts that it was a shoulder shot and the other half is still in that deer. We should give it a rest and wait a few more hours but at 85 degrees it doesn’t take longer than that to start spoiling a deer. If we wait, will we waste this deer? With the amount of blood we’ve seen, he should be dead, right? We decide to push through and find this deer. But soon enough we start running out of blood as if the entrance wound is clogged.

I spent three hours that night and five hours the next morning looking for this beautiful animal, just sick to my stomach for losing him. I honestly believe this deer lived because deer are very resilient. I have gone back a few times now to look for him. I will not go back into the stand bow hunting until 1.) I see that deer on my cameras or 2.) Someone else tells me they harvested him and I confirm it with my own eyes. I have been passing on this deer for three years and he has grown into an absolute giant – and I made a bad shot! I did everything right until the shot. I teach one shot, one kill. I encourage humane harvest of an animal no matter what the species. Sadly, the lesson to be learned here is that no matter how much effort, time, and patience you put into a hunt, the decision of whether or not to pull the trigger is really what it all comes down to. This hunt eats at me.