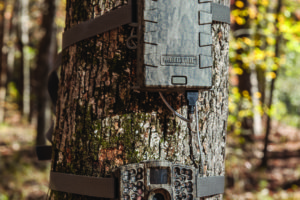 Bear hunting isn’t for the faint of heart—on any front. From waiting to draw a tag (can you imagine a deer hunter waiting 7 to 10 years to draw a tag?), to the time and money commitment it takes to gather bait, to the bees and sweat that comes with maintaining a string of successful bear bait stations.

And that’s not even mentioning the monster boar that works a bait station only under the security of darkness.

Hunting is a labor of love—regardless of the species you pursue—but the bear hunter knows this better than all others. Nothing comes easy. Nothing comes cheap.

The biggest commitment, and most alluring aspect of bear hunting, is the elusiveness of bears in general and the effort it takes for a simple interaction. Take whitetails as a means of comparison. Drive through deer country on any given evening and you’ll see deer milling about in a wide variety of locations… all from the comfort of your truck seat. Drive through bear country and you could spend a lifetime without even a glimpse of a bear—maybe a track if you’re lucky. They’re definitely in there, but you have to go in after them.

And therein lies the challenge. Bears aren’t backyard animals for most hunters, and getting to them takes serious resources.

I started my bear hunting during the days of the Trial Timer. Remember those? It was essentially a string-activated wristwatch strapped to a tree that (hopefully) would tell me the first date and time a bear hit a bait. If and how often it returned was a mystery, other than evidence of tracks, scat or an empty bait crib or barrel. The better the woodsman, the better the understanding of how big the bear was and how often it frequented.

And then came trail cameras, which revolutionized the way every deer and bear hunter monitored, managed and hunted the game they pursued.

Sure, getting photos of the bears frequenting a bait was beneficial. But when paired with temperature, time stamps and moon phases also captured by the camera, a true plan of action could be created and tweaked … and even the most nocturnal bears became a bit more attainable.

But even that doesn’t fix the struggles of a long-distance relationship that often exists between a bear hunter and his or her active bait sites. This is 2016 … nearly 40 years after the United States put a man on the moon. Can we bear hunters get technology to give us any slack? 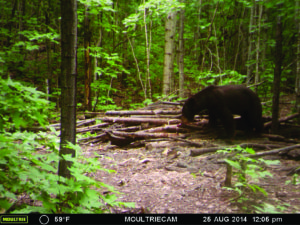 Just like every other motion-activated camera on the market, wireless trail cameras function on the basic principle of capturing an image—stamped with moon phase, temperature and time of capture—each time the motion sensor is triggered. And like all other trail cameras, the image is instantly saved to an external memory source, such as an SD card.

But where wireless cameras shine is in their ability to send information, wirelessly, to an internet account you manage … and more recently, your cell phone. Yes, you heard that right: When a wireless trail camera takes an image, it has the ability to instantaneously transmit that image and all associated data directly to your smartphone in real time.

Using the cellular service of today’s major carriers (Sprint, AT&T and Verizon), wireless trail cameras can tell a bear hunter in the Waupaca area exactly when a bear is gnawing donuts and oil-laced grain at his bait site near Iron River—as it’s happening.

Wireless cameras work much like a cell phone plan, with various packages of data usage at different cost levels. How many images, and whether each is hi-resolution or low-resolution, will largely determine the cost, which can be as low as $9.99 monthly.

In addition, you can monitor and manage the function of your camera from your smartphone app, such as battery level and how much space remains on the camera’s memory card. If you wish to make programming changes on your camera, such as adjust the time delay between photos or changing from single- to a multi-shot burst, you can do that remotely, too.

Where Brand X differs from Brand Y most drastically comes from the service carrier each specific brand has partnered with. It’s difficult to speak for every corner of the Upper Midwest, but Verizon has been the overwhelming leader in available service on the fringes of civilization where these cameras were born to live. If there’s only one person in camp with service, he always seems to be packing Verizon.

Let me give you a real-world situation: Let’s say Bear Hunter BooBoo does indeed live in Waupaca and can’t wait until he draws a Unit C tag, so he finds a private land spot in Minnesota to scratch his itch. He chains a roll barrel to a tree, fills it with oil-laden oats and drives the 6 hours back to Waupaca.

Does he need to make the drive again the following weekend to check on the barrel? What if the bears have been pounding the bait and the barrel is empty? What if they haven’t? A wireless trail camera will answer each of those questions for BooBoo, potentially saving him a full day of driving and all the fuel money that goes with hauling a trailered ATV for 10 hours behind a full-size truck—which would nearly pay for an annual data package.

And like all well-rounded sportsmen out there, I’d guess your mind is already spinning with applications for use once bear season ends … from monitoring deer movement during the rut to getting a notification in bed when your teenager sneaks home 45 minutes after curfew. 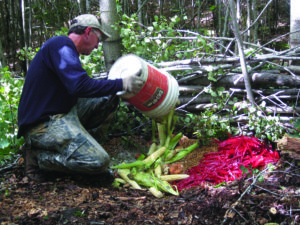 The Power Of Technology

One of the newest and most unique entrants to the wireless trail cam market is Moultrie Mobile. Rather building the wireless transmitter directly into a camera, Moultrie created the Wireless Field Modem, which can be paired with any 2015 or newer camera in the Moultrie lineup.

When images are captured, hunters (or parents of teenagers) can be notified through text, email or via the free Moultrie Mobile App. The Moultrie Mobile website and mobile apps (IOS and Android) offer the most robust photo management features available on the market, giving hunters the ability to organize, analyze and share their photo collections. Affordable monthly plans require no contract, no commitment, no activation fee and no cancellation fees.

This isn’t your grandpa’s scouting camera system … and the lack of room in your freezer will prove it.

Luke Hartle is a hunting fanatic who pursues any open season available with rifles, muzzleloaders and bows. He’s hunted across North America, Africa and Australia, but focuses on the big game and predator hunting Wisconsin and Minnesota has to offer.