Spin-n-Glo’s: Invading the Midwest for Walleye 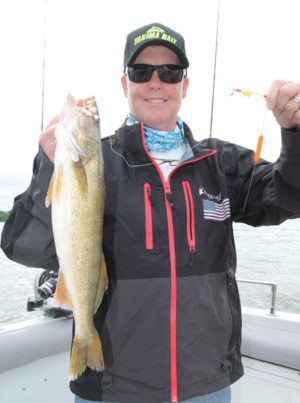 When fishing the Midwest for walleye there is always a “must have” in every angler’s arsenal.  However, those “must haves” are changing ever so rapidly it is hard to keep up with what is new on the market yet actually works. Sometimes there are those hidden jewels that have been around for years that maybe couldn’t be found in your area, therefore, you would have no idea what they are or if they work.

I am co-owner of a business, out of Sheboygan, Wisconsin, named Wolf Pack Adventures. We guide salmon fishing charters on Lake Michigan, walleye fishing charters on Lake Winnebago, as well as the Bay of Green Bay, up into the tip of Sturgeon Bay and travel all over the United States chasing the elusive walleye. When your means of survival and putting food on the table for your family depends on putting fish in the boat, we are always looking for the next “must have” lure or technique.

A few years ago, while I was packing and doing research on Lake Winnebago for a walleye tournament, I was studying the lake maps provided on Lake-Link and reading forums. I ran across a person talking about a lure that had wings that spun at the slowest speeds and did not drop into the rocks, due to its floating body. He was crushing fish on this lure as the bottom walker was dragging through the rocks. He could run these on his extra rods while jigging rock piles.

This intrigued me to the point that it became an obsession. I was going to find these come, “hell or high water.” The more I talked about them, the more people became intrigued as well. What in the world are these things called? I got on the Lake-Link forum and found out who was talking about them and messaged him. He sent me pictures, told me they were called Spin-n-Glo’s, but I still could not find them. That tournament was over, and then I was doing my research on the Bay of Green Bay for the next upcoming tournament and, again, here is a person talking about these Spin-n-Glo’s.

BINGO!!! SPIN-N-GLO BY YAKIMA BAIT COMPANY! This is a company from Yakima, Washington that has been around forever. This is a lure people have been crushing fish on out west for years but it just has not come across the plains due to tight lipped secrets. LET THE SECRET BE KNOWN…. THESE THINGS WORK! Spin-n-Glo’s come in bulk bodies and then can be rigged however you wish, or can be purchased pre-rigged with the Bottom Walker or Rufus Special, a blade combo spinner with a tandem hook design, in a variety of colors and sizes.

I ordered a bunch and started playing. To no surprise, I started catching more money fish, and here is why. When trolling any weeds or rocks, and using bladed meat rigs, you need to be trolling fast enough so that the blade creates enough tension or drag to keep from falling to the bottom and getting gunked up by weeds or hanging up on rocks. With the Spin-n-Glo I can be completely stopped, if I wish, and have no worries. This bait floats, keeping your bait up and off the bottom at all times.  Not only that, but it spins so freely. Let’s say I want to jig an area or rip cast…. this bait can be drug behind also fishing by using a Bottom Walker with desired lead, and your set.

It runs differently though. When first trying these Spin-n-Glo’s, I used my average lead lengths and it wasn’t as productive as I would have liked. Here is why…. it floats. I shortened my lead to keep my bait in the magic striking area and caught more fish. When running lead core, shorten your lead because your Spin-n-Glo’s will ride up on you.

Do yourself a favor, if you are fishing the Midwest and put some of these in your boat, or better yet, in the water….you will not be disappointed!