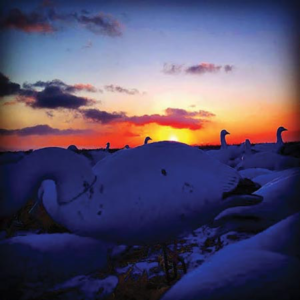 Snow goose hunting was stopped in 1916 because of low population levels. Hunting was allowed again in 1975 after a long recovery. Since then, their numbers have escalated to the point where they are destroying their nesting habitat in the arctic tundra. Many of their areas are also used by other species of birds and wildlife. Snow geese are grazers and feed mainly on grasses and sedges. In and around many nesting colonies, grazing by geese is so intense that it kills the plants and leaves the ground void of plant life. This over grazing of plants leads to erosion of thin layers of topsoil needed to sustain plant life. As the geese destroy these prime areas they move on to less productive areas that are more delicate and easier to destroy. Once these areas are gone, the moisture in the soil evaporates and leads to salinization (buildup of salt). This then leads to areas totally void of plant life; ultimately destroying their own habitat. This habitat is fragile and cannot tolerate the ever increasing snow goose population. At some point, there will be an environmental disaster. This fragile habitat may take decades to recover, if it recovers at all.

In 1999, the federal government mandated the Arctic Tundra Habitat Emergency Conservation Act. This was also known as the Light Goose Conservation Order (LGCO). The goal of the order was to decrease the light goose population by half and slow down the ecosystem destruction. The best solution to this issue was to get the hunters involved and relax some of the hunting restrictions. This would allow the use of electronic calls, unplugged guns, extended shooting hours and no limit on birds. This is a great opportunity for hunters to get out after the waterfowl seasons are closed and more importantly make a difference in conservation and overall health of the species.

I made my first spring snow goose hunt to Nebraska over ten years ago. The weather was not conducive to hunting, but I managed to get a few birds. Just seeing the sheer number of birds was truly a spectacle and hard to describe.  As always, I’m looking for potential guests for the show. I was talking with a young man one night at TheReelShot and we started talking about waterfowl hunting. I told him I used to be a diehard waterfowl hunter in my younger days, but gave it up for bow hunting.  As we talked more he had a very excited tone to his voice so I asked him, “Have you ever done a spring hunt?” The words couldn’t come out any faster. “I have in central Illinois,” he said.  I was intrigued, so I asked him where.  “Rick Hamm the Snow Fox, it was awesome,” he blurted out.  So the story began.  I made the call and set up an interview for the show.  At that time, I also booked a hunt with him. After the show I realized that this was a quality outfitter that took this very seriously. I learned plenty about snow goose hunting and was looking forward to this hunt and learning more. 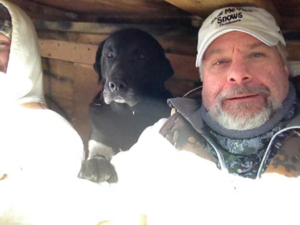 The day had finally arrived.  After a long day, I left the shop at 8:30 p.m. and headed south. After a six-hour drive I hit my destination, Hardees in Havana, Illinois. I took a brief nap and was ready to meet up with Rick at 5:45 a.m. Rick arrived right on schedule and, after the introductions, it was off to the blind. Before I knew it, I was sitting in a pit blind right in the middle of thousands of snow goose decoys. Rick’s first words were, “When you hear me turn on the caller, get your head down and get ready.” We had several big flocks interested the first day but the weather had changed dramatically and shut the movement down. One of the things I enjoy most is meeting new outdoors people and sharing stories.  This trip was all of that. The stories and the jokes made the day go by extremely fast.

The second day was even better; I had the opportunity to share the blind with four young guys from Michigan who had hunted with Rick before. As I sat next to Rick, I realized the passion this guy had for snow goose hunting. He was like a captain of an airplane.  As he sat in the cockpit of his blind, he was checking the weather, talking with other hunters to get an idea of where the birds were, and how they were moving. I could tell he had been doing this for a long time and had a handle on what these birds were up to. The blind was dug into the ground and had seating on both sides, fully equipped with heaters and a stove. One of the hunters made us some pork cutlet sandwiches, and they were delicious!  I had also connected with Rick’s dog Smokey. As with most labs, if you scratch them on the head, they won’t leave you alone. The guys in the blind told me to keep an eye on my food or he would wait until you’re not paying attention and steal it. Fortunately, he never pulled any of his Houdini tricks on me.

Although the weather impacted the hunt, the memories will last me the rest of my Life. Remember it’s not about the grail, as much as it is the quest. If you’re looking for a quality snow goose hunt, Rick Hamm is the guy. Go to his Facebook page and you will understand. Take the time to share your passion for the outdoors with someone it will make you a better person.

LIVE LIFE IN THE OUTDOORS