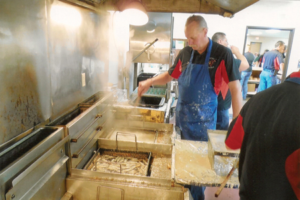 One of the earliest signs of spring, when I was growing up in the 1950s and 60s, was the legendary smelt runs on Lake Michigan and with it the ever-popular smelt fries. Every church, bar, VFW Hall and American Legion Post seemed to have one.

Eventually, the smelt runs diminished and with it the smelt fries. But today, in the northwestern side of the state, The Baldwin Volunteer Fire and Rescue Station has kept the tradition of the spring smelt fry alive. On the last Friday in April, they put on a day long smelt fry attracting people from all over western Wisconsin and eastern Minnesota.

Way before the trout and salmon fishing we have today in the Great Lakes, Lake Michigan and Lake Superior had a thriving native trout population and with it, world renown fishing.  But, the sea lamprey decimated the trout in the early 1950s. Smelt had been the primary forage fish for the trout and with the trout gone, smelt populations exploded. In spring they came into shallow waters in incredible numbers to spawn making the smelt run the most exciting party to hit the beaches of Lake Michigan.

From Milwaukee to Door County, once the word got out the smelt run was on, people from all over the Midwest flocked to Lake Michigan.  Although I suppose the smelt were active during the day, it seemed most of the smelt were caught at night or at least that was when the party started.

On the beaches you would see bonfires burning all over. Some people were wading in the water, netting smelt. Others stood around the fire, warming their outside from the heat of the fire and the inside with adult beverages. There was always a case a beer around. No need to keep it on ice as the weather was cold enough to keep it cold. For those who needed a little more to keep them warm there was always a bottle of brandy or whiskey available too. People seemed to rotate from the fires to the water and back to the fires again. One must remember that in those days, we didn’t have the quality of waders or warm clothing we have today. It didn’t take long to get cold wading in Lake Michigan. It was noisy with the waves splashing up on shore, the crackling of driftwood fires, people yelling, laughing and bantering. It was a great party.

There were several different ways to net smelt. There were seines, usually pulled by two or more people on either end of the long nets. There were dip nets, looking much like landing nets but with finer mesh netting. Then there were drop nets. Those were most often used off bridges over the rivers and streams running into Lake Michigan. A drop net was a square net with lead weights to get it down in the current without tipping the net in the water. The net was dropped down with ropes and once hitting the bottom would be rapidly brought up.

Regardless if you were using a seine, dip net or drop net, when you brought the net in it was teaming with flashes of silver from smelt. Most smelt measured about four to six inches. The fish were dumped into buckets and many times one swipe of a net could bring enough smelt to fill a five- gallon pail. It was phenomenal the amount of smelt that were netted. In one evening, you could fill enough buckets of smelt to feed an entire church or small town. Which actually happened on a fairly regular basis. They really were that abundant.

One of my buddies told me when he was a kid, his father would take him and his brothers to the beaches on Lake Superior to get smelt. They didn’t have a net. When the waves washed up on shore they would deposit bunches of smelt on the sand.  So, he and his brothers ran out picking up as many smelt as they could, skipping back up the beach with their smelt in hand before the next wave rolled up on shore, again stranding more smelt. They continued to do this until they had all the smelt they wanted.

Another buddy of mine, living at the time in Milwaukee, would just take a twelve pack of beer and a bucket and drive north until he found a bunch of people standing around on the beach. He would trade his beer for a bucket of smelt. Considering his financial status in those days, it probably was fairly cheap beer, but apparently smelt fishermen weren’t particularly discriminating when it came to beer. They were catching more than their share of smelt, so it was more than a fair trade. Netting smelt sure could make a man thirsty. 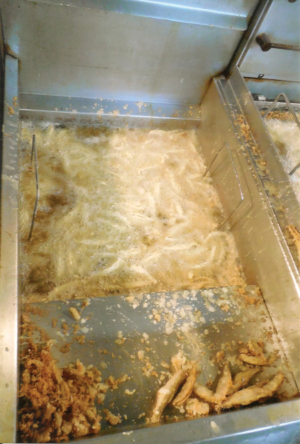 A night of netting smelt could result in bunches of smelt sloshing around in five-gallon buckets and wash tubs. It wasn’t uncommon to come home with a trunk full or a pickup bed load of smelt. I wonder how long it took to get the fish smell out of the trunk? Then the next big chore was to clean them. Cleaning smelt was actually fairly easy. You just needed a scissors. To clean them, cut off the head with the scissors, cut down the belly, scoop out the guts and that was it. Although it was easy, it was a long tedious job when you had buckets of smelt to deal with. For many people it became a family or neighborhood project. Aunts, uncles, brothers and sisters, family friends and neighbors sitting around the basement or garage cleaning buckets or washtubs of smelt. Sometimes it took as long to clean them as it did to get them. As a reward, people left with buckets of cleaned smelt to have their own smelt fries.

Smelt were so plentiful, men from churches, bars, VFW Halls or American Posts would get a bunch of them so their organization or bar could sponsor a smelt fry. Even if you didn’t go netting for smelt, going to a local smelt fry was part of spring. Of course, bags of smelt were passed out to family and friends and I do remember my father one day coming home with a bag of smelt. As the oldest child, I was allowed to sit up on Friday nights to watch the horror shows, which came on television after the evening news. My two younger sisters were a bit miffed they weren’t allowed to join us, having been sent off to bed by the time the news started. As we watched the movies, my father always made some for a snack. That was when I first had pizza. It was a Jess and Nicks frozen pizza. The Friday after father got the smelt, he made them while we watched the horror movies. He rolled the smelt in flour and fried them in butter. I remember them being very tasty.

Unfortunately, the hay day of the smelt run and smelt fries began to die out in the 1970s and 80s. Smelt were no longer present in the vast numbers they had once been. By the mid 1960s, the lamprey was finally controlled enough that stocking of trout and salmon was possible. There might have been other reasons for the decline of smelt, but reintroducing trout and salmon back into the Great Lakes was a major factor. The great schools of alewives, another invasive species to the Great Lakes, were a principal forage base for trout and salmon and responsible for their tremendous growth rate. And now smelt had competition from the alewives for their forage base. As smelt were competing with the alewives, once again becoming bait fish for trout and salmon, their numbers dramatically declined. The days of the great smelt runs were now over and with it the huge smelt fries. Today, smelt are mostly taken through deep water netting in the Great Lakes.

The Baldwin Fire and Rescue Station has been holding their smelt fry for thirty eight years. Originally, the Baldwin smelt fry was a community project.  But the town gave up on the smelt fry a couple of years before the Baldwin Volunteer Fire Station took it over. It is their major fundraiser according to Gary Newton, Baldwin Station Chief. It is held in the Baldwin American Legion Post a few blocks from the fire station. The fire station has 38 volunteer fire fighters covering four villages and ten townships.

When the fire station first revived the smelt fry, some of the volunteer firemen went over to Lake Michigan to net smelt but soon after they began to purchase their smelt from a distributor. They initially purchased whole, uncleaned smelt and cleaned them themselves.  That became a real chore according to Gary. “If you wanted six hundred pounds of smelt to cook, you had to order twelve hundred pounds of smelt to clean.” Gary said.

It became a tedious, weeklong process. All the fire fighters came into clean fish as well as people from the community. By the end of the week, people would get a bit testy, Gary pointed out. Now they purchase their smelt already cleaned. Their distributor is in Two Rivers and last year they ordered eight hundred and 50 pounds of smelt. “All we had left at the end of the day was one roaster of smelt,” Gary said. 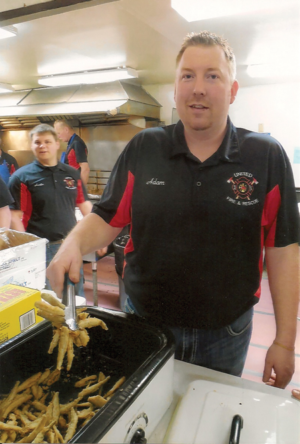 The Baldwin smelt fry provides all the smelt you can eat plus chips, coleslaw, beans, pickles and tartar sauce, all for a free will donation. According to Gary, “All of the money goes to purchase equipment.” Lately, the money has been going toward purchasing air packs.

This year the smelt fry will be held on Friday, April 27. “For a couple weeks out we will be getting phone calls at the station asking about the smelt fry”, Gary said. They will receive the smelt earlier in the week and then on Thursday, the day before, they will start getting everything organized.  Active volunteer fire fighters with many of the retired fire fighters do all the work. For some it is a tradition that can‘t be missed.  Some volunteers will take a day off of work to help with the event.

Bob Lokken, from Baldwin, a retired firefighter handles mixing the breading for the smelt. He told me it is a mixture of water, flour, eggs, molasses and baking powder. The tartar sauce is a family recipe from Gary Newton’s mother.  They will go through over thirty gallons of tartar sauce. They also make their own coleslaw.  Last year, they went through 250 pounds of fresh cut coleslaw.

Friday morning starts out with a breakfast for the firefighters at the American Legion Post. It is part of the tradition. Doug Anderson, of Baldwin, another retired firefighter, is the fish cooker and has been doing it for years. At 11:00 they start serving smelt. “People from all over come to the smelt fry,” Gary said. “People from Menominee twenty miles east to Minnesota’s Twin Cities thirty miles west show up for the smelt fry.”

Last year, when I arrived with two friends from Hudson, the parking lot was filled with cars and a line out the door with people waiting to get in. “We have had people call in twenty or more takeout orders at one time,” Gary said. “Some of the factories in the area have whole shifts come over at lunch or dinner time. We have seen people come by for lunch and then return later for in the evening for dinner.” Last year by 8:00 in the evening they had served over 1100 people.

The smelt run and smelt fries were all about people having fun. It started that way in the 1950s and 60s and in Baldwin it still is that way thanks to the Baldwin Volunteer Fire and Rescue Station. Gary summed it all up by pointing out, “It makes for a fun community day.”