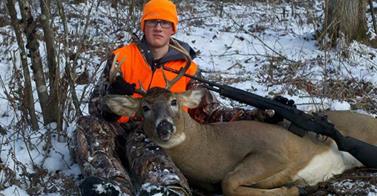 A Minnesota boy who planned to kill his family and many others’ photo turned into an anti-hunting argument on social media platforms.

The other day I was scrolling through Facebook when I happened to come across an article showing a young kid with a deer. At first I thought nothing of this since I follow a lot of hunting pages, but the caption under the photo really caught my attention: “Minnesota Teen Methodically Plotted Carnage in Three Acts. Police say.” Although the article had nothing to do with hunting, some Facebook users made quick action on blaming hunting for this kids insanity.

In case you are not familiar with the article or have not heard about it, you can read it here. Many users attacked hunting due to the photo provided of the boy who was planning on committing three acts of violence. Comments such as “Do we expect sanity from people who pose with corpses?” and “People are so desensitized to killing. Serial killers usually start with animals, so this photo is no surprise.”

There were many people who were just using an unfortunate circumstance to attack hunting, when just to remind you again, this article had NOTHING to do with hunting.

It saddens me that some people actually think about hunters in this manner. Being from Northern Wisconsin I have never really encountered such brutality towards hunting, so this was a real eye opener for me. You can read some of the comments from the Facebook post here once you scroll down and find the article that was posted May 2nd. We should be focusing on the severity of the issue instead of taking time to rip apart something that is in no way involved.

I hate to bring up political things but this just rubbed me in the wrong way when I read it. While I understand that people are entitled to their own views, it’s hard for hunters to argue for our sport when we have to deal with garbage like this.

What do you think of the people voicing their opinions on this photo about anti-hunting?