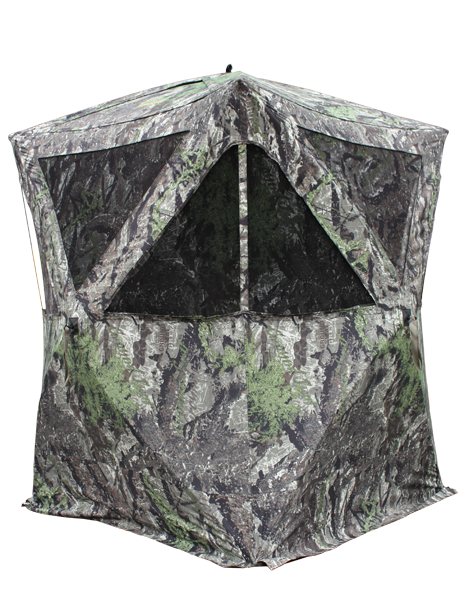 The Primos Club XXL Hub Blind is a great addition for any bow hunter, turkey hunter and more.

Turkey season is either here or right around the corner for American hunters and while it may not appear like spring outside, it’s time to start getting your equipment ready for the season. There are many ways to turkey hunt, but two of the most popular are the Run and Gun method and Scouting and Sitting in a blind. If you’re going to be using a blind this season, the Primos Club XXL Hub Blind is a great choice. You can get your Primos Club Hub Blind here at Cabelas.com.

The spacious interior of the Primos Club XXL Hub blind is large enough for two hunters with guns or bows and they can even stand up in. There are built in gear pockets that also have a special section to hold the ground stakes so that you won’t end up losing them out in the field.

The exterior of the popup blind is DuraMatte HD poly brushed fabric that offers a magnificent look that doesn’t have a sheen that will alert game. The Fast access SS Hook blind windows open quietly and easily and are able to close and block out light so that the birds and large game animals won’t see you inside the blind. There are even replaceable, mesh, shoot through windows on this amazingly convenient blind from Primos.

With a good amount of weight, the blind is built very well and can withstand the elements. A 6 foot 3 inch hunter can stand up in the middle no problem and has room for a friend as well. The best part about the blind is that it’s quick and easy to set up, and that’s what’s most important in the early hours of the morning.

Check out the Primos Club XXL Hub Blind at Primos.com or you can purchase it at Cabelas.com for $219.99