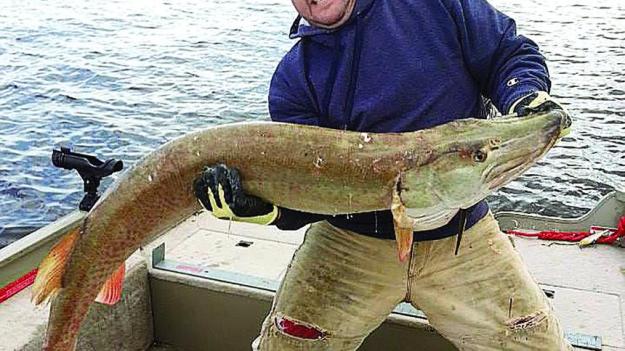 David Ramm wasn’t letting the big fish on his line go until he made sure that his father was going to see it and he could snap a few photos. Ramm of Blue Grass, IA and his dad, Gary Ramm 74, of Davenport, Iowa, were fishing on Crane Lake in Northern Minnesota on September 11 when David caught the fish of a lifetime and what almost certainly would have been the new Minnesota state record Muskie.

Crane lake is traditionally a crappie, walleye and northern pike lake and has never had muskies stocked in it, yet there are always reports of a few making their way in. This giant muskie  measured 58½ inches long and had a 28-inch girth, according to David Ramm.

Length-weight formulas put the weight of a fish like this at 57 to 58 pounds. The Minnesota state-record muskie, which was caught on Lake Winnibigoshish in 1957, weighed 54 pounds. That fish was 56 inches long and had a 27¾-inch girth according to the Minnesota Department of Natural Resources.

Muskies of this size are very few and far between in Northern Minnesota and the Ramms feel incredibly fortunate to have caught this one. According to the Minnesota DNR, Lake Vermillion has some large muskies and that is likely where this one swam from after getting through a dam and swimming 40 miles down the Vermillion River. The fish had it’s tail clipped indicating it was stocked, which lake Vermillion is.

“The biggest we’ve ever measured on Lake Vermilion is 55.6 inches,” said Duane Williams, DNR large lake specialist at Tower. “I hear reports of 56 or 57 inches on Lake Vermilion that are probably fairly credible.”

The Ramms come to Crane Lake every summer to fish for big northern and muskie. David also fishes for muskies elsewhere. On this trip he was using a St. Croix muskie rod with 80-pound-test PowerPro line and a 130-pound-test fluorocarbon leader. He was casting a black fire Double Cowgirl bucktail spinner in about 5 feet of water.

“I saw that fish come up and take the bucktail 10 to 15 feet from the boat,” Ramm said. “It just hammered it. But it didn’t fight a whole lot. It was just real heavy. It never came out of the water.”

The fish put up a short soft fight before the Ramms were able to net it and get it into the boat.

The father/son combo took some photos and video and then measure the fish against a bump board in the boat. The fish measured 58½ inches, David said. He used a string to get a measurement of the fish’s girth. A photo that they took of the fish on the bump board shows the fish stretching nearly the length of the boat.

The duo said they had no intention of keeping the fish, even though they were aware it would likely be the next state record.

“We said we’d let a fish like that go,” he said. “I knew what the state record was. I knew this fish was bigger. But I don’t want to be the guy who’s got his name down for a state record and for killing that fish.”

They are going to get a replica made and cherish it for years to come.

Congrats to this pair on their ethics and catch. What a fish.