All Fisherman Must Read! 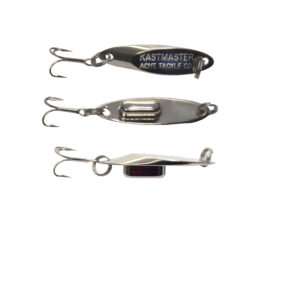 Acme’s new“RATTLE MASTER” adds sound to its roster of fish-attracting features! A jewelry-like finish draws them in while the built-in rattle closes the deal.  Whether in fresh or salt water, pan-sized trout up to bragging-sized game fish, they can’t resist the RATTLE MASTER.  It casts like a bullet, and being made from solid brass, won’t bend, break, corrode or dull even in salt water.  It’s great for vertical jigging during ice-season too.

Matt Bichanich, the National Sales Manager for Hard and Soft Fishing, the parent company of ACME lures, said that it was time to kick things up a notch for this proven lure.

“The Kastmaster spoon is iconic,” he said.  “And catches all types of fish for open water salt or fresh water, but it also is deadly for ice fishing, due to it’s awesome finish that refracts light and pulls fish in.  But we are always researching new ways to attract fish and adding a rattle does just that.”

There is no other spoon that is as versatile as the original Kastmaster, but by adding a rattle, Bichanich knew that they would have a bait that went the extra mile for anglers, looking to catch a variety of species.

“The benefit of the new RATTLE MASTER is that a person can go out and catch nearly anything that swims,” he said.  “From walleyes under the ice, to suspending crappies, to bass hanging on the weed edges, to Great Lakes species, an angler can fish with one bait and catch anything. With people battling a ton of events from sports to family outings, we wanted a bait that would give them the most productive time on the water.”

For more information go to: www.acmetackle.com