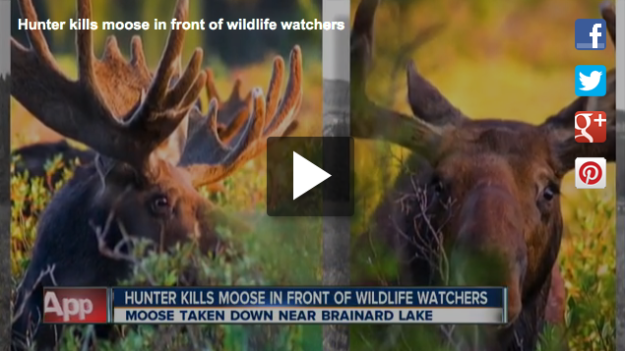 A moose hunter in Colorado is facing backlash over a bow hunt in which he shot and killed a moose near wildlife watchers on Forest Service Land.

A bow hunter in Colorado is being criticized and facing a lot of backlash for killing a bull moose last weekend in a park that had wildlife watchers nearby. The hunter shot the bull legally in an area close to a hiking trail in the Roosevelt National Forest and it ran into a field and dropped dead near a group of wildlife watchers.

The hunter shot the moose close to Brainerd Lake in an area that local campground hosts and witnesses say is an unethical area to hunt, although it is completely legal. The moose in that area they say are near tame and are used to people being near them.

Activists and the people who are showing backlash to the hunter is due to the area where he shot and killed the moose. While it’s a legal area to hunt and he had a tag, the locals say that the moose in that park are well-adjusted to humans.

“These are basically pets,” said Kim Lehman, who hosts a camp site near the lake told ABC 7. “They’re tame. They’re not afraid of humans at all. There’s no hunt in that kind of kill.”

The hunter had every right to hunt where he did and kill that moose. In Colorado, Forest Service lances are open to hunters and he held a legal moose tag. The Colorado Parks and Wildlife department agrees with the hunter and says that he followed the laws to the books.

“I don’t think it was the gentleman’s intention to have the animal go in the direction of where the wildlife watchers were,” said Jennifer Churchill, spokeswoman for the northeast region of Colorado Parks and Wildlife. “Forest service land is huntable. And this was a clean and legal kill.”

What do you think? Do you side with the hunter or the local campground hosts and witnesses? It’s definitely a touchy subject, but where it’s legal to hunt, you may.