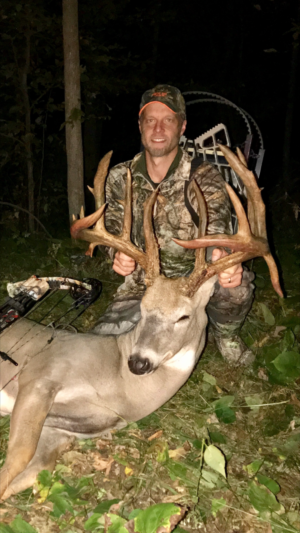 Opening weekend of archery season in Wisconsin has started, and with that, many eager hunters hit the woods in anticipation on getting into the stand in hopes of having a shot at a monster buck! Well for this lucky hunter in Burnett County he sure had the hunt of a life time!

With the first day of season in the books for Greg Widiker, he set out to his stand for another sit in hopes of seeing a buck he has been watching since 2014. According to Leader News Room, Widiker says, “I was definitely very aware of him and the last two years the focus was definitely on him. He was the only deer I was going to shoot.”

The morning of the 17th was more so an unsuccessful one. Widiker set his eyes that afternoon on a primary scouting mission around his property. Leader News Room says,  with Widiker that bucks on his 80 acre piece of property usually doesn’t hold big bucks until later in the year. The bucks usually feed primarily on the neighboring bean fields that surround the parcel of land. Thats unless there is a nice acorn fall on his property.

Widiker says, “One thing I do have is white-oak acorns” so he scouted for another place to sit for his evening hunt.

With a quick search of the property a white-oak acorn ridge was found with ample amount of sign including a fresh scrape, and rubs all around.

“It was a white-oak ridge and it was just raining white-oak acorns. The sign was hot, with fresh droppings. There was a fresh scrape and buck rubbings already. So, for September, it was like, hello!”

With his stand hung the wait began with the anticipation of what could happen next. Over the course of the hunt Widiker saw 15 deer in total many of which were small fawns and does. A quick snort wheeze call from Widiker allowed him to see a massive bodied deer working his way to him. Thats when it happened.

“I watched him in the binoculars for so long that I forgot I was hunting. I realized that my angle was right down when I was looking through my binoculars,” Widiker said. “I was just soaking it in and watching him. I could hear him sniffing the acorns and I could hear him crunching them, it’s amazing.”

The buck ended up only 15 yards away, sniffing the ground and eating those white-acorns. Widiker says, “I got buck fever and started shaking out of control,” he said. “I just closed my eyes and focused on my breathing and talked myself down, and it worked. And I regained my composure.”

He calmly drew back and settled his pin. He then let the arrow fly and THWAP! The smack of a Rage Hypodermic broadhead made contact. With excitement and an overwhelming amount of adrenaline, he made his way out to base camp where him and his buddy would begin the tracking process of the hunt. With a huge blood trail he found his buck only to have his friend say, “He’s right there!”

Widiker says, “It was overwhelming for me. It took me awhile to touch him. I just have tremendous respect for the animal. He’s just been what ruled my hunting for years. Part of me felt bad. Actually the first thing out of my mouth was that I apologize.”

-For more to this story check out http://www.leadernewsroom.com/2017/09/21/burnett-county-hunter-arrows-buck-of-a-lifetime