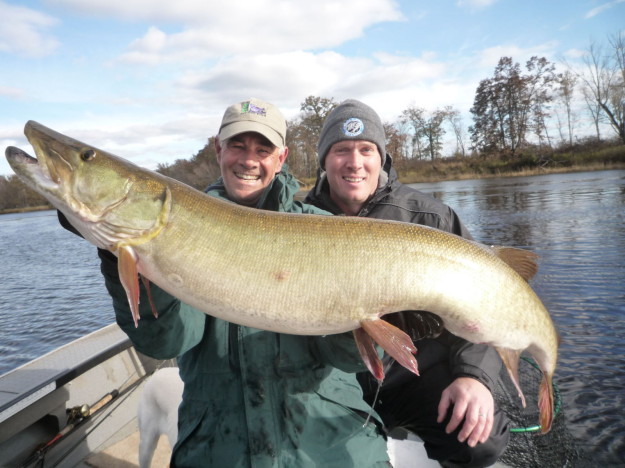 The age-old question of, “would you rather have a bigger animal, or more of them?” is in full play in the state of Minnesota right now, but they won’t get to choose. State biologists in the land of 10,000 lakes are reporting that the population density of muskies in Minnesota are declining, but the fish are getting larger.

The Minnesota DNR estimated that there are around 500-600 adult muskies in Lake Bemidji, a 6,581 acre lake in MN. These fish are huge. The DNR caught 80 muskies in Lake Bemidji and one in every four females was over 50 inches, including a mammoth that was 46 pounds, just eight pounds shy of the state record (56 inches, 54 pounds).

“We started seeing this last year on Bemidji, and we were surprised by the size distribution,” said Gary Barnard, the DNR’s Bemidji area fisheries supervisor in an interview with the Pioneer Press. “So this year we spanned the entire spawning period to make sure we weren’t doing something that was biased toward capturing bigger fish. We found the same thing this year: A lot of these fish are big.”

While the DNR and biologists are not 100% sure why the fish are getting larger, but there are less, one theory is cannibalism. There is no evidence that there is not enough food for the fish, but if the muskies are eating each other, the “bigger survival” theory makes sense.

There have been no signs of disease either, but another possibility is that the fish are delaying sexual maturity in order to get larger and the smaller fish are not coming into shallow water to spawn. This has been seen in male bluegills in the past.

Minnesota Gov. Mark Dayton recently signed off on a statewide increase to a 54-inch minimum most of the state’s inland lakes and waters. The thought behind this was that musky fishing in Minnesota is now more of a catch and release sport.

“There’s a lot of consternation in the muskie world right now,” Branard said. “We’re seeing a lot of these lakes crash, and then we see the DNR pull stocking back to see if there’s natural reproduction. The DNR did a great job creating a world-class muskie fishery, but now we need to maintain it.”

Have you seen less muskies in your lakes and waters? Let us know what you’ve been catching and seeing out on the water this year.