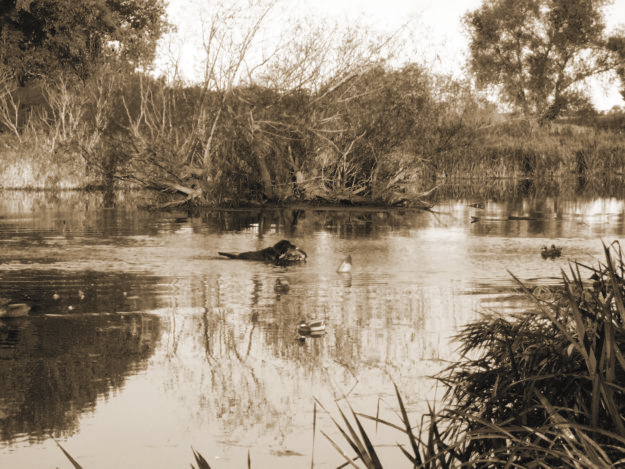 When Dad called that night, I knew it was over. His mobility and health had diminished. A quadruple bypass, four hip replacement surgeries, three on the same side and an extensive operation to repair an aneurysm in his stomach had taken their toll over the past 15 years. More recently, his hunting partner of more than half a century and his dog, had died. His 86th birthday coincided with Thanksgiving that year and the family was preparing to gather for the double celebration. But there was always a lingering hope that we might bird hunt one more time, under the right circumstances.
“Jon, I want to give you my guns when you come up for Thanksgiving,” he said.
“OK, Dad, if you’re sure you want to,” I said and immediately felt an empty spot deep inside.
“I’ll see you in a couple of days and we’ll talk about it,” I added.
“We’re looking forward to seeing you then, drive safely,” he concluded.
That was it. Our telephone conversations were never long, no matter how much time between them. He didn’t like or wouldn’t dwell on the negative. We didn’t gossip. The conversations were always short, sweet and to the point, except when we talked hunting. I hung up the phone and felt sad, a cloud of mild depression drifted over the room. Our bird hunting days that spanned five decades or more were over, not even a possibility anymore. Giving up his guns made it final. Dad grew up on a farm in southern Minnesota and loved to hunt. It was his only form of recreation outside of farm work during the Depression years and he was a crack shot. He had a special gun – a Model 12 Winchester 12 gauge full choke, his favorite. It had a beavertail forearm and a smooth action. The walnut stock and forearm were engraved in silver with wild game birds in action. It was probably meant to be a showpiece by a previous owner, but, for Dad, it was a working gun. He recalled getting it from a local amateur gunsmith. I think it was sometime in the 1950s or very early 60s. All I knew is that my memories of him using any other gun were minimal.
The Winchester Model 12 was made between 1912 and 1964. Since it was my Dad’s top choice in shotguns, I grew up on the Model 12. The first gun of my own was a Model 12 modified choke 20 gauge I got for my birthday just in my teens. I quickly graduated to a 12 gauge and used a short-barreled Model 12 modified choke for the next several decades.
When Winchester announced the company would stop producing the Model 12 as we knew it, Dad ran want ads in the local paper to collect a few extra guns for backup. I don’t think he could imagine hunting without one. I don’t think he used another gun until the 1980s when lead shot was outlawed for waterfowl and we purchased a pair of 12 gauge Remington 870 pumps with interchangeable chokes. The guns he was passing on to me were his 870 pump and four Model 12s, including that favorite full choke. Images of him pulling up on pheasants and ducks with that Model 12 as a much younger man passed through my mind. When he was slightly older, I recalled him walking along side me over the great expanses of western North Dakota in pursuit of sharp-tailed grouse. He was deadly with that shotgun. Now, it was cased up with the others and stacked against the kitchen counter by the back door, ready for the transfer of ownership. It was a solemn occasion.

“Take care of this one,” he said, handing me the full choke.
“I will Dad. I remember when you got it.”

I unzipped the case and looked at the stock. The silver engraving had fallen out of the inlays in places, but it was beautiful, maybe for its symbolism more than anything, the instrument of the consummate bird hunter. The other guns included another two 12 gauge Model 12s, a full choke and modified choke, his 870 Remington and a 16 gauge Model 12 full choke. He bought that later in life when his shoulder first started to bother him and the bigger 12 gauge slowed him down. It was a sweet little gun, but the engraved full choke was the feature item. When lead was outlawed, we used the Remingtons for steel shot. It took a lot of getting use to and somehow the absence of the Model 12s in the duck blind took some of the romance out of duck hunting for me. That and the encroachment on our private property by the new youngsters in the bass boats outfitted for waterfowl hunting that could go anywhere. I took the guns in their cases and loaded them in the back of truck, taking extra care to place the engraved full choke on top in its padded case. The first snow of the year had covered the ground but the air was balmy. I said goodbye and headed home down the country road. The headlights cut a stream through the night on the bare asphalt lined by the fresh snow. On the quiet road my thoughts of hunting trips gone passed in review…my Dad, working magic with that full choke, dropping flushed birds on the open fields or swinging over decoys as northern bluebills swooped in from the big water. One time, in the late 1950s on Thief Lake in northwestern Minnesota, when I was about 13 with my new 20 gauge, three bull cans came into the oversized Herter’s decoys we had spread out. The ducks looked big as locomotives, just like a Les Kouba scene.
“We should have had three,” he said.
“We?” I fired three shots too and I’m sure each one slammed harmlessly into the low lying fog over the reeds. 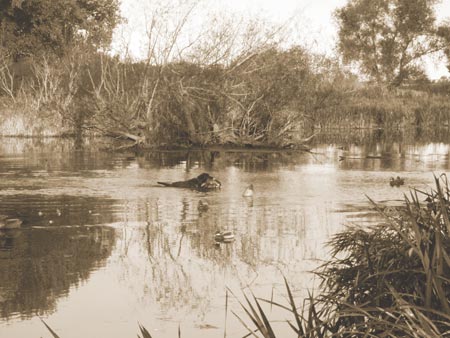 Another time, when I was about 15, we participated in one of the last of the great South Dakota pheasant hunts that started in the 1950s. I shot a 12 gauge, modified choke Model 12 so many times in one field the barrel was so hot I couldn’t touch it, as roosters went down in droves and as many flew out untouched. The engraved full choke, I’m sure, dropped many more at my Dad’s hand. On our first goose hunt together, in 1967 on the open fields of western Saskatchewan, we were almost stopped cold without a shot when a flock of mallards and a flock of snow geese crisscrossed over our decoys the first morning of the hunt. We didn’t know where or what to shoot first for a moment. The first time we went sharp-tailed grouse hunting in North Dakota in the 1970s, he got a double with his favorite shotgun and said it should have been a triple. All I know, is when I heard him shoot, but couldn’t see him, there was no need in asking, “Did you get anything?”

When I was in the Navy and couldn’t join him for one of those Canadian hunts, he almost drowned in a pothole when he knocked his healthy limit of mallards and had to retrieve them all to prove it to his hunting companions. He told me the story and said that all his life he hoped to get into a situation where he could kick a bunch of ducks out of a pothole then sit as they came trickling back in small bundles. He must have been around 50 when he got the chance and almost paid dearly for it. Again, the engraved full choke did the work. The realization that there would be no more opportunities to build on our mutual hunting experiences was sad, indeed. But I had the guns…and the memories.