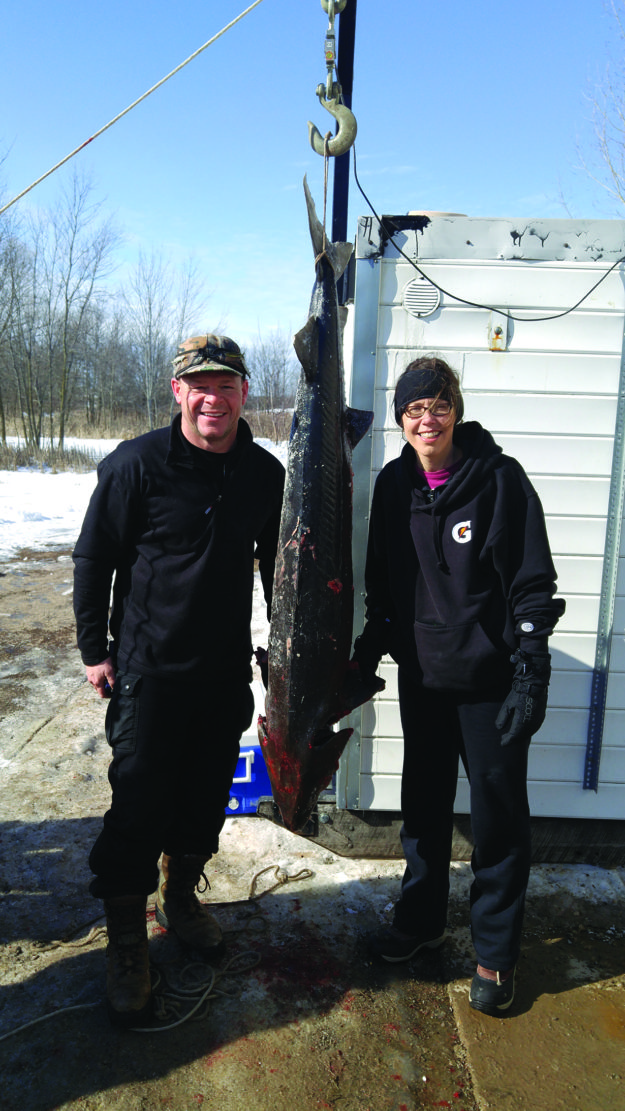 I wanted my wife, Ingrid, to experience sturgeon spearing and see what it was all about.  I told her the best way to do that the first time was to get an upriver sturgeon tag.  She had never been sturgeon spearing before this year.  She had never even been in a shack before. To be honest, I don’t think she had ever been ice fishing before.   We started applying for an upriver tag for her about 6 years ago.  We finally got the notice late last summer that she had been drawn for an upriver sturgeon tag.  I was extremely excited…she was not.

She said, “I don’t think I really want to go spearing…I just don’t think I’m that interested.”  I told her not to worry, I would take care of all the details.  All she had to do was show up and throw the spear.  She slowly started to tell her family and friends about what she was going to do and admitted to me after the season that she really wasn’t that thrilled to go even two weeks before the season started.  That changed when some of her co-workers started talking to her about it and got her fired up!

Now we were close to spearing season and I started to get nervous.  I had to scout for fish, the ice conditions were less the perfect and water clarity throughout the whole system was poor.  I found a spot I liked, clarity was good, and the ice conditions had really improved as well.  Now all we needed was the sturgeon to be there.

Opening morning was here.  Ingrid was now a little excited, and a bit more nervous.  She had no Idea what to expect.   We arrived at the shack and I went in first, got everything setup, and the heat on before she came in.  The day had arrived, she was finally in the shack; sturgeon spearing.  About an hour in, there was the first sturgeon.  It was close to bottom and going across the front of the hole.  I pointed to it and after she saw it, I helped her grab the spear and orientate the head in the right direction, and away the spear went! …sort of.  Ingrid kind of didn’t totally let go of the handle and she almost went in with the spear.  She missed the fish, and looked at me with a, “What just happened?” look.

And my reply, “Maybe you should let go of the spear next time?”

So, we set the spear back up and waited.  Another hour or two went by and Ingrid sat looking at the hole, listening to me rehash all my past sturgeon stories, when another sturgeon came through.  Again, I helped her grab the spear and aim. She threw it, but the spear dropped like a rock, going almost straight down missing the fish low.  She looked at me again and said, “Boy, that spear is heavier than I thought!” And, we laughed again.  I told her next time to aim a little high to help compensate for the weight of the spear.

We sat the rest of the day, both really excited while seeing a few other types of fish, but no more sturgeon.  She was particularly fascinated with a gar fish that swam through the hole.  In fact, the first time she saw the gar, it came through the middle of the hole just under the ice, barely moving.  She gasped and started to grab the spear.  I said, “WAIT, that’s not a sturgeon.”   We watched it swim away. Later we watched as it swam through the hole again.

One o’clock came and we were done for the day.  We took all our gear out of the shack and headed back to Winnebago to see how the rest of the group did for the day and for her to experience the other part of sturgeon spearing.  That part is hanging out with friends and family out on the ice talking about what we all saw that day, while having food and drinks.  I told her that sometimes the best part of sturgeon spearing is just being outside on the ice listening to everyone’s stories and feeling their excitement. 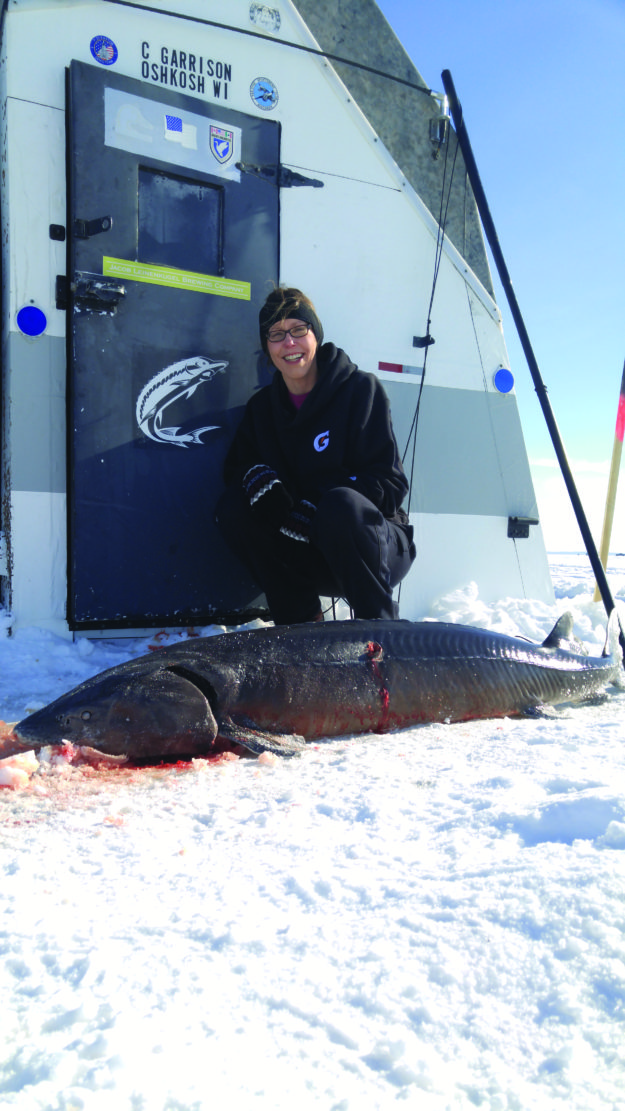 Ingrid and I both agreed after day one, that the season was already a success.  Her first time sturgeon spearing, she not only saw sturgeon, which can be a challenge, but also got to throw the spear at not one, but TWO different fish.  Now, Ingrid had a HUGE amount of confidence that day two was going to be her day.  She was sure she would spear a sturgeon.  She didn’t sleep much that night and was up and ready to go way before me on day two.  I knew right then that Ingrid was getting hooked on the sport I was already obsessed about.  All I had to do to seal the deal was to help her get a sturgeon on the ice.  She was confident, and I was the one that was nervous.  I wasn’t sure we could repeat day one without moving to a new spot; after all, she threw at two different fish on day one and missed both.  Did we spook them?  Did they move out?  There was only one way to find out, begin day two.

The start of day two was a repeat of day one.  I got the shack setup and heat on so Ingrid could come in and concentrate on watching down the hole.  It wasn’t five minutes into the day and our friend the gar fish was back.  Yep, swimming casually through the hole as if to say good morning to us.  I immediately said, “Well, at least we saw something today.” And we both laughed.

It wasn’t too long and sure enough, here comes a sturgeon crossing through the hole close to bottom.  She didn’t see it at first, but did grab the spear and threw at it late.  Another miss, but that was a tough shot, considering it was early in the day and she didn’t see it until it was heading out of the hole.  She looked at me and said, “OK, I’ve got this down now, I’m going to get a big one!”

As we sat talking about her experience the day before, a nice sized sturgeon came creeping into the hole from behind us right between her legs.   It was only about four feet below the ice.  Those are the ones that startle you, because you can’t see them coming from behind until they are right underneath you.  Ingrid gasped, jumped up and grabbed the spear before I even saw the fish.  Since the fish was literally right between her legs and shallow, it got spooked when she stood up and immediately turned and headed out the hole.  I watched as Ingrid threw the spear and saw it just miss the fish to the left.

At that point I didn’t know what to do anymore. I just sat back down and put my hands over my head.  I thought…that was it…that was her last shot.  Both our hearts were racing, and I was trying to think of something to say, but I couldn’t think of anything when she said, “WOW, that was GREAT, even though I missed again.”

As I replayed what just happened in my mind, I thought, something was different that time.  There was a weird sound after she threw the spear.  I said to Ingrid, “You know I think you might not have missed that sturgeon.”

She replied, “What do you mean?”

I explained that something sounded different when she threw the spear that time, and from what I saw, the spear went really close to the sturgeon’s head,  “I think you might have hit that sturgeon in the head.”

She replied again, “I don’t understand, it swam away, I had to have missed it.”

I then explained to her that a sturgeon’s head is so hard that most, if not all of the time, if a spear hits on their head it will just bounce off.  I couldn’t explain anymore because a really big sturgeon was coming straight for us from out front.  It looked like a torpedo barreling down right at us, almost like it was on a kamikaze mission.  Again, Ingrid saw it before I did and she flew out of her chair! It was coming right for me, and Ingrid was to my left.  She grabbed that spear and “chucked” it at that big fish heading right into the hole.  This sturgeon was only about three feet under the ice and was flying FAST!  She didn’t throw that heavy spear down this time; she threw it straight across the hole!  My jaw must have hit the floor as I watched her launch that spear straight as an arrow, across my face and land a direct hit on that beast!  I gathered my composure, not really believing what had just happened and went into action.  Ingrid yelled, “I GOT HIM!”

All that came out of my mouth was, “WOW, WHAT A THROW!”  I grabbed the rope from her and started fighting the fish.

I replied, “Get everything out of the shack…throw the chairs out…everything out, I need some room when I bring him up to gaff him!”  My only concern at this point was to get the sturgeon out of the hole and onto the ice. That’s when you can really say, “I GOT HIM!”

As he came up, I saw he was rolling and had rope wrapped around his body.  I wasn’t very concerned because Ingrid had made a good hit.  Besides she was using a trusty ol’ Jurgenson fixed tine spear…they’ve never failed me and I’ve gotten sturgeon over 100 pounds with that spear!  After a couple of tries I gaffed the sturgeon and heaved him out of the hole and onto the Ice!  Mission complete!

Ingrid did it! Her first time spearing and she was successful…with a nice sized fish to boot!  We both jumped up and down hooting and hollering, until a truck pulled up to ask how big it was.  We curiously asked,  “How did you know we got one?”

The gentleman in the truck replied, “I saw the chairs come flying out of the shack…that’s a sure sign you had a fish on!”  We all laughed and celebrated Ingrid’s success.  She was now completely hooked on sturgeon spearing.

As I looked the fish over, I noticed a distinct fresh mark on its head.  I pointed it out to Ingrid and said, “This could have been the one you threw at and thought you missed?”

The gentleman added, “To be honest, it could have been a mark from a miss with my gaff.”  We will never know for sure.

What we do know, is my wife Ingrid now calls herself a sturgeon spearer and is officially part of our sturgeon group.  It was an experience neither one of us will ever forget.  I can only hope my daughter will have the same type of experience when she gets to throw her first spear.