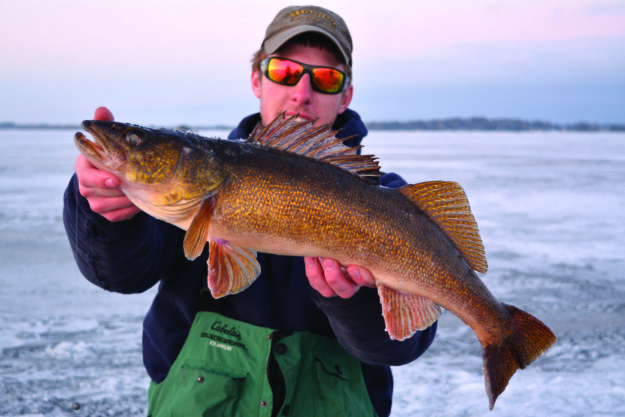 Ice is here!  As many of you know, I am an absolute ice fishing maniac.  As the temps plummet outside, my blood starts boiling with anticipation for what is arguably my favorite fishing season of all.  I’m usually one of the first guys out on the hard water; using a lifetime of experience to safely assess the ice conditions and get on fish that haven’t been bothered in a month or more.  Early ice is probably the most productive of the season, so I try to get out and start punching holes as soon as conditions safely permit.  Crappies, bluegills, perch, pike; you name it.  I love catching all of them on Wisconsin’s numerous fine ice fisheries.   I am, however, a walleye guy and there is one place just north of the Wisconsin border that is probably one of the finest trophy walleye ice fisheries around:  Bay de Noc.

A short drive up Hwy 35 along The Bay of Green Bay’s west shore will lead you to Escanaba, MI and on it’s doorstep lies Little Bay de Noc.  This little bay (as far as Great Lakes are concerned) on the north end of Lake Michigan holds good numbers of 10 lb.+ caliber walleyes from late fall into the ice season.  There are many points of access with good bait and tackle shops in the Escanaba/Gladstone area that can gear you up with everything you need for your trophy walleye expedition.  Bay Shore Resort (1323 N. Lake Shore Drive, Gladstone, MI 49837   906-428-9687) is a notable establishment that has a state boat launch right on its doorstep offering extreme convenience.  They have a fine selection of live bait along with plenty of tackle options.  We’ve stopped by numerous times during our filming trips for Larry Smith Outdoors and the service has been great.  Close proximity to bay access is a huge plus.

Something I love about Bay de Noc is machines aren’t absolutely necessary to get on great fishing.  Of course, having my ODES UTV or snowmobile makes it a heck of a lot easier hauling the gear and crew around, but when the ice is just thick enough for walking, it’s not a huge pain hoofing it with just a sled of gear in tow.  Most trophy walleye ice fisheries can be quite expansive, and walking to prime spots would be an all-day affair.  I’m not saying you won’t burn some calories on Bay de Noc, but it is very doable for the ice angler on foot.

With that being said, I would like to preach a little ice safety.  Ice fishing is an extremely enjoyable sport, but one must ALWAYS respect the ice and be mindful of the conditions at hand.  Have your ice picks handy around your neck, try to fish with a partner whenever possible, have a rope with a flotation device at the ready, spud your way out, and measure ice depth often as ice thickness can vary greatly.  One safety product I cannot say enough good things about (and, as I guide, I wouldn’t be without) is a Nebulus emergency flotation device.  It’s a package about the size of a pillow but when activated has enough flotation to hold 3 people and an ATV or snowmobile afloat.  They run about $450, which may seem steep to a lot of folks, but considering the amount of money most of us have invested in this sport, it seems like a very small price to pay.  After all, can you say that $450 isn’t worth your life or the lives of your loved ones?  It is, in my opinion, the most important safety tool you can have on the ice.  Check them out at nebulusflotaion.com. 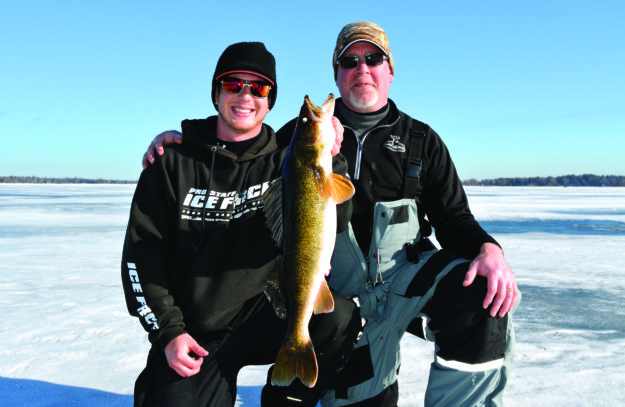 Ok, let’s get fishing!  There are a few things to know about Bay de Noc that will help you in your quest for that trophy before you even drill your first hole.  This is an extremely clear body of water, which usually means time of day is an important factor when trying to capitalize on the best bite.   Typically, the low-light times of dawn and dusk are your best bets.  I’m not saying that midday can’t be good at times, but in my experience low-light times of day are the most productive. Bay de Noc does have a decent night bite, so this is a fishery you can burn the midnight oil on if you so choose.  (Escanaba in da moonlight…?)

Because of its clarity, the bay does have a decent amount of weed growth, which makes finding good areas to place baits very important.  I usually try to set my baits in 12-16 fow in pockets of weeds adjacent to deeper water where my baits (typically suckers) can swim unimpeded by cover where they will be found by feeding walleyes.  If you place your baits in the weeds, the baitfish will find cover in said weed growth significantly reducing your chances of hooking up with that trophy.  I usually set my baits a few inches from bottom, but in a good area that has some weed growth (not a jungle mind you), I will position the baits 4 to 6 inches from the tops of the cover.  The key is to have the bait attract feeding fish, so make sure the prey is visible to the predator.

Tip-ups are the choice method of presenting the aforementioned baits efficiently on Bay de Noc.  I favor the Beaver Dam round tip-ups because they let less light into the hole which helps mitigate light penetration in the clear water, and also have the great durability in tough conditions that is synonymous with the Beaver Dam name.  I have at least a 6’, 6-8 lb. fluorocarbon leader (I like P-line) attached with a micro swivel to my tip-up line.  I use #12-#10 hooks depending on the size of the suckers I’m using and I will, at times, attach a tiny glow bead right above the hook to give me an edge at night or during extreme low-light times.  Even though the water is very clear, that little bit of glow will help walleyes home in on the bait from afar.  Biting a portion of the tail off of the bait to keep it actively moving will also aid in attracting fish.  I favor the smaller hooks on my rigs due to the fact that negative walleyes are notorious for “mouthing” baits before they actually commit to the chow, and a hook that is too large will result in a lot of dropped baits and false flags.

I know a lot of old-school fishermen favor depth bombs for quickly setting tip-up depth, but because of the weed growth, my Vexilar is an extremely important tool in determining the best possible location for my presentations.  It conveniently lets me find weed pockets quickly without ever having to drop a line until I’m ready.  This saves time and also keeps my hands warm until they’re called upon for actual fishing duty.  The Vexilar also lets me see my baits as they go through the water column, so I can set them at precisely the right depth.  (Flashers:  More than just a jigging tool.)

Speaking of jigging, it does have its place on Bay de Noc.  I will, at times, move around jigging trying to find active fish while a couple of tip-ups do their thing; conveniently rigged with Blue Tipz from Deep Freeze (deepfreezefishing.com). 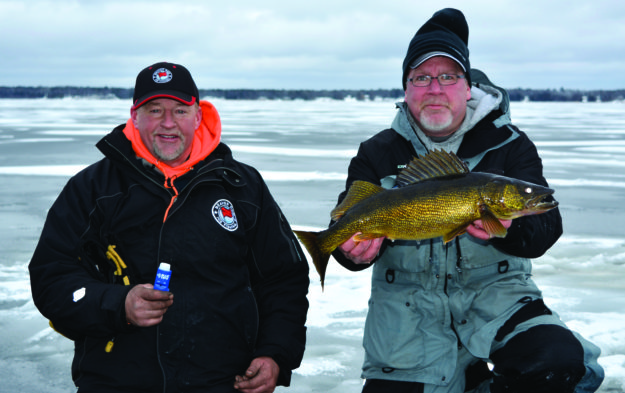 These slick little devices send an alarm straight to my smartphone or an optional Blue Tipz receiver when a flag is tripped so I can concentrate on jigging without having to rubberneck around for flags.  They’ve been a big hit with a lot of people we have fished with during our television trips; allowing anglers to concentrate on jigging while just listening for the alarm.  Baits like Acme Kastmasters, the new Rattling Kastmasters, and Acme Hyper-Glides are some of the new baits I like to use while jigging Bay de Noc.  Kastmasters have long been an effective ice fishing bait, and the new rattling version gives you an added attraction radius due to the sound.  Hyper-Glides are going to be a hot bait this winter due to the intense swimming action they have throughout the water column on the fall compared to baits of a similar design (acmetackle.com).   Jigging helps fill in the spaces while waiting for tip-up action because, not only is it another way to search out and catch walleyes, but there are also plenty of perch and pike to be caught on this body of water.

It’s important not to take the “set it and forget it” approach with tip-up fishing on Bay de Noc.  Every 20-30 minutes I will SLOWLY and QUIETLY walk up to my rigs (remember these fish are wary in the clear water) and gently lift them up to make sure that baitfish keeps moving.  If that bait isn’t moving, you’re not attracting fish.  Munching the tail off helps with this somewhat, but it is still important to check your tip-ups often.  You have to put all the odds in your favor to consistently catch fish; so don’t get lazy.

When you hook up with that Bay de Noc beauty, (and if you follow the techniques I’ve outlined here, I’m sure you will) you will immediately see what the attraction is for this body of water.  Giant walleye with a chance at a 10 lb.+ fish that are, in my well-traveled walleye opinion, the most beautifully colored specimens of the species around.  Hues of brilliant gold with deep, dark eyes that are the epitome of an artist’s vision of a walleye.  This is the place for truly photogenic fish of trophy proportions.  Have the camera at the ready, because you will want to capture every angle of these superstar walleye, and while staring in disbelief at a creature so magnificent you might hear yourself say, “What a great day to be alive!”

Larry Smith is a full-time Wisconsin fishing guide with 30 years experience, an avid and accomplished outdoorsman, and also host of Larry Smith Outdoors; new weekly outdoor entertainment programming airing on Fox Sports Wisconsin, Fox Sports North, CW18 Milwaukee, and Time Warner Cable Sports Channel.  Visit larrysmithoutdoors.com for broadcast times.  Like us on Facebook, follow us on Twitter, and subscribe to our YouTube channel to never miss an episode.  Check out “Bay de Noc Ice Walleyes” on our YouTube channel to see these techniques in action!