Every year there are plenty of whitetail rumors and plenty of giant bucks shot that go around the internet. This one right here though, is a monster. While we are still looking for more information on this (if you have any please send to PJ@morningmoss.com) here is what we know so far about this giant Minnesota velvet archery buck shot last week.

This once in a lifetime freakshow of a buck was apparently shot in Southeast Minnesota by a man named Chris Warren. Our information is coming from a lot of Facebook posts and we’ve heard that this deer could have been shot in either Winona or Houston counties, just across the border from Wisconsin and the famous Buffalo County. 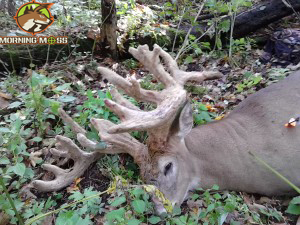 This giant Minnesota velvet buck shot in the MN archery season is a dandy. From looking at the pictures, I can see almost 20 points and tons and tons of mass. It even has a drop tine!

We can’t wait to hear the full story of this awesome deer and see some more photos. Congratulations to the hunter and please send us some info if you have it.

Check out more near world record bucks and the latest big buck news on MorningMoss.com.