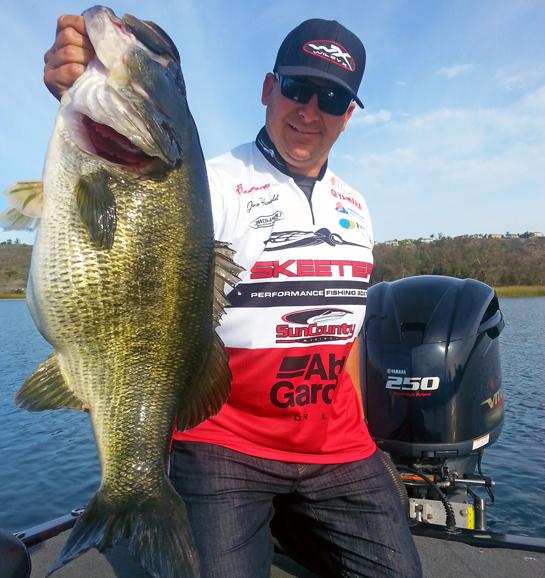 Sometimes things happen when we least expect it and angler Justin Hanold found this out when he reeled in one enormous largemouth bass this week. Justin noticed some huge bass swimming near a dock the week before and drifted his boat near there when his cell phone rang. He tried to answer it, but missed the call so he called the person back, then texted. When he went to pull up his bait, the bait jerked back and after an intense fight, he hauled in San Diego’s largest bass of the year, a 17 pound largemouth.

Hanold caught the bass on a modified, 8-inch, Huddleston swim bait on the Miramar Reservoir, one of San Diego’s best bass fisheries. Hanold is a very successful bass fisherman and competes in tournaments regularly while also operating his own guide service. While he obviously has a ton of fishing knowledge and talent, he gives all the credit to this bass to pure, dumb luck.

“I had drifted closer to the dock, and looked down to see a giant bass gliding out to the deep water under me,” Hanold told sdfish.com. “I noticed my line was also out in deeper water at this point, so I picked up the slack and felt a little resistance. Thinking I was stuck in some grass on the bottom, I gave it a little tug with one hand to pop it free and felt it tug back. Then a second later my rod was almost ripped out of my hand.”

The big bass had swallowed Hanold’s bait and he managed to get it into the net and into the boat.

While Hanold says that the fish was all about luck, he is no stranger to catching gigantic largemouth bass. Just last week he caught and released a 13 pound 14 ounce fish and has caught 150 bass over 10 pounds.

The Mirarmar Reservoir is home to some gigantic largemouth bass. Earlier this year a 16 pounder was caught there and the reservoir holds five of the top 25 bass caught all time.

Send us your big fish photos and we’ll post them here!