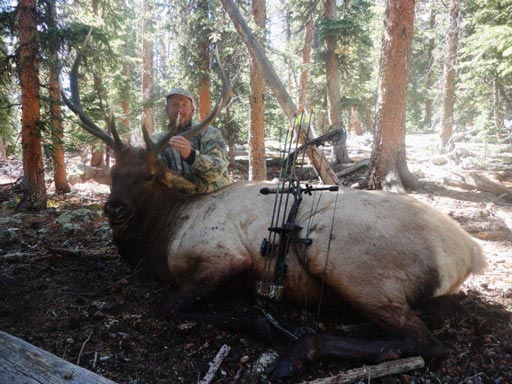 A colorado elk hunt just may be the best choice for your next out of state adventure.

“Hang on a second and let me do a cow call before we clear the trees,” I suggested as the four of us neared the large park we agreed to check before we broke off into pairs for the days hunt. The call had no sooner than left the tube when the first bull sounded off less than 200 yards away!
Before we jump ahead, let’s start back at the beginning. I’d hunted Colorado for elk several other times over the last 20 years with varying degrees of success while hunting over-the-counter units (Game Management Units where you can just purchase tags like we do for white-tails in WI). After a few years of trial and error and learning how to hunt these much larger versions of our whitetails, I and a few of my buddies started applying for, and accruing preference points for elk. In 2006, two of us cashed in 9 years of points on a muzzleloader tag and considering such a large time investment, opted to book an outfitter and guide for the hunt. Being a do-it-yourselfer, this was a little different experience, but I soon realized this was one of the best investments I’d ever made from an elk hunting standpoint. Both my partner and I shot two nice bulls but the most important part, gained priceless insight from our guide on how to hunt these large critters! 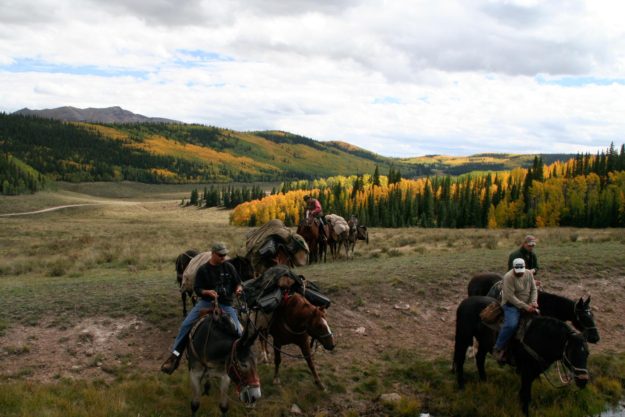 One thing we forget growing up in the Midwest…

Is that we cut our eye-teeth hunting one thing, white-tails. We spend countless hours in the field each year, honing our craft and after years of experience, figure out how to do it right. Not that it always happens the way we want it to, but when it does, man we feel smart! Even after heading west several times in the past, only being there for a week or two every couple of years doesn’t give you much of a chance to learn how to “hone” your elk hunting skills like you do white-tails each fall. Hence, hiring a guide the one time we did helped to cut our learning curve by at least several more years of trial-and-error. 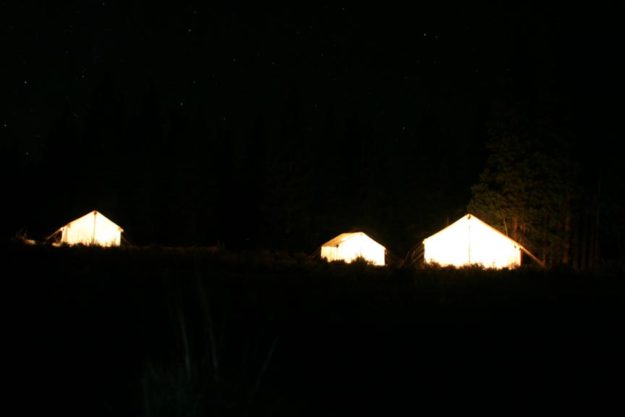 So now that we were “experts” in elk hunting,

And after accruing another 4 years of points, my brother and two of my other hunting buddies decided to try a “drop camp” with the same outfitter in the same country I’d muzzleloaded back in ’06, only this time with archery equipment. After not drawing on our first attempt, we were luckily able to draw tags for the 2012 season.
With plenty of lead time, we all started to try and get into a little better shape…. “Round is a shape, right?” While we may not have necessarily quite reached the level of professional distance runners cardiovascularly (is that a word?), we at least were in far better shape than just heading out unprepared. By the time we headed west in September, we had all dropped a few pounds and were feeling pretty confident we could tame the terrain. Reality always sets in after that first 10 minutes of hiking at altitude!!! (Our hunting area was at 11,000 ft or more which I am now convinced that no amount of exercise will prepare you for!) Fortunately, our outfitter had a base camp set up at 10,000 feet where we spent our first night and got a chance to acclimate before we packed in the next day to our hunting camp at 11,500’.

Not being a horse person, aside from riding ponies at the fair when I was knee high, I can count on one hand the number of times I’ve been in a saddle, which was common to my entire hunting group. Fortunately, our outfitter had mules and horses that I think Helen Keller could have ridden without a problem. That is except for my buddy Hank. We hadn’t made it 400 yards up the trail when his mule decided that he had an eye for real estate and proceeded to leave the road and head through a downed gate and up to the doorstep of a cabin that was for sale! I was then handed the lead rope of three of our pack horses and our outfitter ended up leading Hank and his mule Jack, the rest of the way to our camp. A small bit of advice if you are a novice horse wrangler like me…. If you have any friends that have horses or a riding stable nearby, take the time to put a few hours in a saddle before you head west, you’ll be glad you did as climbing a mountain on a horse is a whole new ball game.

By the time we got to camp and finally straightened our bow-legs from the two hour horse ride, we hastily changed into our hunting gear and headed out for a quick hunt yet the first evening. My brother and I had two close encounters with bulls that first night but unfortunately, neither panned out. One thing you can count on in the mountains is that you CAN’T count on the wind to stay in your favor for long!
Day two we broke into pairs and headed out early after a hearty breakfast before light. After several miles of hiking and calling, more close encounters, and more frustrating wind shifts, still no arrow had been launched. The last few hours of light, Kevin and I decided to split up and sit on a few meadows closer to camp. As I was setting up in my meadow and Kevin was heading towards his, he let out a cow call and a bull responded just up the hill from me! The wind was actually right and I thought that this would be it. The bull and Kevin went back and forth several more times calling and bugling, but the bull didn’t come. I scanned the edge of the meadow and spotted the bull a hundred yards away peering down the meadow looking for the unseen cow, but not seeing any; he turned and started his way back up into the timber. I had a collapsible cow decoy in my pack that I quickly deployed and thought I’d sneak up to the edge of the meadow and try to call from there and hopefully he’d see my decoy.

I made it about ten steps from my hiding spot out across the meadow, looked up and saw the bull trotting directly towards me through the timber! I guess he must have glanced back and thought “there she is!” Unfortunately, there’s not a heck of a lot you can do with a cow decoy in one hand and your bow in the other and no cover within 50 feet! The disappointed bull quickly figured out that I wasn’t a cow and was gone.
We all met back at camp that evening to swap stories and share recon information. We headed for the rack and decided to all head out together in the morning toward a large park a mile to our east and then drop into some different draws from there. 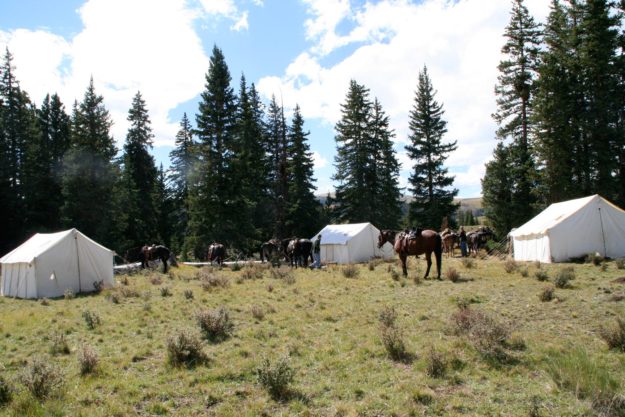 We headed out together the next morning,

And arrived at the edge of the large park where we planned to split up. Before we cleared the trees, I let out a quick series of seductive (sounded that way to me) cow calls and got an immediate response less than a few hundred yards to our right. That bugle was cut off by another from straight out in front of us in the park which was followed up by a third bull to our left. You’d have sworn that someone just threw a grenade in the middle of our group of hunters the way everyone immediately scrambled separate directions for the nearest piece of available cover! I sent Kevin, Hank, and George fanning out ahead, and I dropped back to call and hopefully bring a bull into bow range.
The first bull that had responded downhill from us turned out to be a dandy 6×6 herd bull with several cows and spikes with him.

Unfortunately, downhill in the mountains early in the morning usually means downwind and they caught on to our game pretty quickly. The second bull out in front, which we later dubbed “the growler” because of his deep raspy bugle (which we heard several more times through the course of the week), was an absolute brute with several cows of his own. He unfortunately caught Hank moving from one small spruce to another and was soon headed east. That left the bull that was calling from north (and uphill/upwind which is always a good thing). Our group quickly repositioned with the tactical prowess of a Navy Seal team (maybe no,t but it sounds cool). The three shooters spread out and moved uphill towards the bugling bull moving from one piece of cover to the next to close the distance while I followed in behind trying to sound as needy as possible with my calling. It seemed to work as the bugling started closing the distance and finally the bull cleared and provided George with a good broadside shot which he didn’t miss and soon his first bull of his hunting career was on the ground.
After the commotion settled and we were able to get back together and talk about the crazy hornets’ nest of elk we had stumbled into that morning, there were a total of 19 different bulls and an untold number of cows amongst the herds we got between that morning!
The rest of the week resulted in several other close calls with bulls which unfortunately didn’t result in shots but all-in-all, one heck of a successful trip that I hope to repeat several more times before my body won’t let me anymore!

Be sure to check out the premier hunting and fishing magazine to read more about food plots and see more hunting articles on MorningMoss.