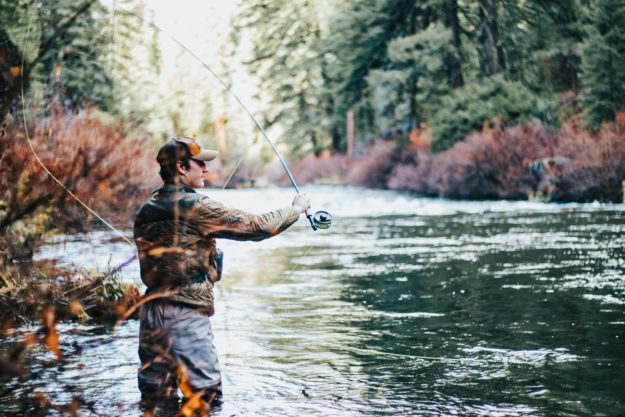 We live in some trying times. With everything on the news and all the stresses that life throws at us, sometimes it’s good to just unplug. What better way to get away from it all than a nice fishing trip? There’s so much you can learn from going out into the world and catching a fish. It may seem like a tired old parable, but those often hold the most truth. If you’re looking to find a new hobby that helps you get your mind right, your lungs full of fresh air, and maybe a stomach full of good meat, fishing may be for you. If you’re new to the world of fishing, here’s a simple guide to get you going on what could very quickly be a lifelong hobby.

The basic thing you need for fishing is the right gear. It doesn’t matter what kind of fishing you do, it’s going to be the same basic set. Subsets like fly fishing are an exception, though. You can get the best fly fishing gear for beginners and 90% of it is transferable to any other style of fishing except for the rod. It happens to be the first thing you need. A traditional spinning rod is a bendable, solid piece that casts a monofilament line. A fly fishing rod is more lightweight, more flexible, and it uses a fly line. The differences are subtle, but they present themselves significantly when in use. Having fly fishing gear at your disposal gives you a much more versatile edge in the sport. It’s also a tremendous skill to achieve once you’ve got enough practice.

The basic anatomy of the reel is similar to that same worm on a string, except the line is much longer, fed through a series of loops, and on a reel. The reel is used to, well, reel in the fish you’ve caught. Depending on the type of fish you’re trying to catch, you can use different kinds of bait or lure. Modern lures have the hooks already on it. They can be set to float or weighed down depending on the kind of fish you’re trying to catch. Top water lures are meant to mimic small creatures and bugs that like to rest on the surface. The opposite is true with sinking lures.

Casting the line can be done in a few different ways. Fishing, by nature, is about looking for where the fish is and casting your line with the right lure. If you’re using a spinning rod, you tend to use a single case. This combination of rod and motion is best for still wide waters. That’s the traditional “fishing” we tend to think of. Fly fishing, on the other hand, uses something called the false cast. It’s a flicking back and forth of the line that’s used to time one’s movement with a moving target. Fly fishing is most usually seen in streams and rivers across the world.

Common sense, isn’t it? Fishing is a universal language. It’s primal and calming. It’s the best stress reliever and the antidote to an over-complicated world. The best thing is, with some gear and some know-how, you can call your local park ranger and get to fishing today!