Cole Fenzel shot this enormous mule deer buck during the North Dakota mule deer hunt with his bow. The buck had a non typical score of 206 6/8 and the net was 196 3/8.

Cole Frenzel is a fan of MorningMoss and a North Dakota bow hunter. This past season he had the experience of a lifetime when he shot an absolute gigantic mule deer buck. Read the story below as told by Cole about his 206 6/8 inch buck that netted a typical score of 196 3/8 inches.

My good hunting friends Andy, Chad and I had been watching this buck for over 2 years!   He lived entirely on public land and we would spend countless hours scouting and trying to track him down to some kind of pattern for when season would come.  We usually would see him during our scouting expeditions once or twice and never see him during the actual season. He was labeled as a ghost. 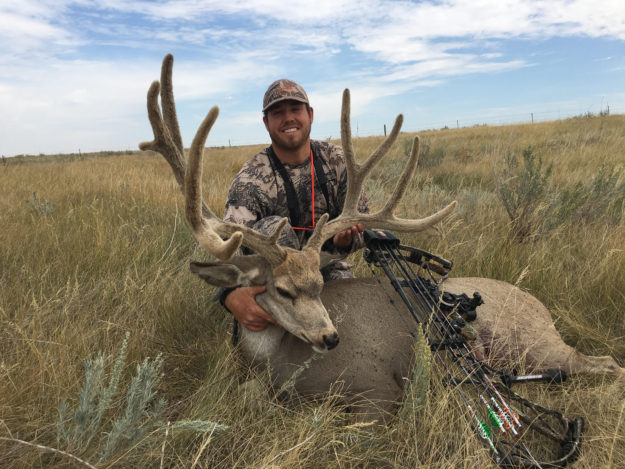 The night of opener my buddy Chad happened to be in the area we had seen the buck previously and spotted him at last light.   He called me on the phone that night and told me he had seen him and we need to go out and find him early tomorrow morning.  I was ecstatic to hear the news and couldn’t wait for morning to come.  Being it the 2nd day of North Dakota’s archery season and us hunting public land we knew we were going to have to be the first ones to the spot and hike in a mile or so in order to secure ourselves a real chance at getting this giant ghost. Chad went to the east in the direction he had seen him the night before and I went to the west. We split up about a mile apart and planned on meeting up to discuss what we had seen later that morning.

Upon my hike in, the sun was just starting to rise and it presented me with enough light to do some glassing in this beautiful country of the North Dakota badlands.  I threw up my binos and immediately spotted a nice buck, but the buck standing beside him was even bigger! It was him! I knew right away it was the “ghost” and immediately got out my spotting scope to admire, film and watch where these deer were going to go bed.  Just to see this magnificent buck on the hoof again was a true experience!  The bucks kept feeding out of sight over the next hill and I would have to “dog” them to stay with them and stay out of sight.  They fed on for over and hour until they finally decided to make their way into some breaks and bed in a small clay drainage with sage, grass and juniper trees.

Mule Deer Buck of a Lifetime

I was 500 yds away in a patch of Russian Olive trees and could not move out as the smaller buck was bedded in the open facing directly in my direction with the ghost bedded right behind him facing the other way.   I kept thinking to myself if only this other deer wasn’t here right now I would have a great chance at putting an arrow in the ghost.   I kept my patience however as the weather was calling for it to be 91 degrees and sunshine along with a perfect 18 mph NE wind and I knew the Bucks would eventually head for some shade once the sun got higher. Within a couple hours the two bucks walked closer to me bedding in the same clay drainage, but this time tucking under some juniper trees finding shade.

It was then I was able to bed them down for good.  I backed out a couple hundred yards and found Chad waiting in the area we were supposed to meet.  I told Chad I found the buck and took him right to the Russian olive trees I was hiding in.  After about an hour of studying the terrain and formulating plans and schemes we decided we would both go on the stalk and I would take the low ground and Chad would take the high ground.

We crawled all the way inside 200 yards and split up.  I inched my way closer to 130 yds and saw the ghost bedded under a juniper tree with his butt facing me and he was sleeping! I slowly removed my boots and made my way towards him.   I knew the terrain extremely well from glassing it for a couple hours and knew which tree he was under and I was able to slip inside 30 yards undetected!  The clay was extremely quiet and played a huge factor! I basically could hear this giant snoring! I was on the bottom of a clay knob and stayed below the horizon.  The buck was slightly elevated from where I was hiding and I had a juniper tree directly behind me, which I knew would break up my outline and aid in helping me draw back and any hide any movement I might have.   Eventually the buck picked his head up and looked around.  I could not believe the pure massiveness his antlers presented. It almost did not look real to me! He finally stood up and raked his giant velvet antlers into the trees a few times but did not present me with a good chance at his vitals. He then tucked even tighter under the juniper moving away from me slightly further.

The way he was bedded was still his butt end facing me and I could see his right shoulder now while he was laying down, but there was some brush in the way.  I thought hard about taking the shot, but decided not too. An hour went by and he had picked his head up again.    I was cautious not to always be looking at him because to look at the buck I would have to peak my head over the clay horizon, so I would peak about every 30 seconds to a minute.    I had ranged everything around him and knew how far everything was. I don’t know how it happened, but sometime in that 30 seconds of me not looking at him my wind must have swirled or he may have spotted me moving my head down. Whatever it was, the next time I peaked over the horizon he was out of his bed and had taken 2 steps towards me and was staring directly at me.

BUSTED! I thought to myself. Dang it! How the heck did he spot me? All the hard work I’ve put in over the last several years and countless hours of glassing and shooting and he has me busted! I did not move a muscle nor did I make eye contact with the buck.I had read in “Mule Deer Hunting Tactics” by Mike Eastman to never make direct eye contact with a Muley buck and my father Doug, who instilled the true passion for the outdoors in me, had always told me the same. So I did not dare make eye contact.  After the longest 3 minutes of my life and my legs basically falling asleep I had passed this bucks examination. I couldn’t believe it!  He turned calmly and started grazing directly away from me!

I immediately pulled my bow back and knew he was at 32 yards.  The buck saw the movement and snapped his giant rack back to look at me.  He couldn’t tell what I was due to the juniper behind me breaking up my outline! He then turned his entire body to get a better look at me and gave me the perfect quartering away shot!  I touched my release and watched my arrow disappear exactly where I wanted it to! I knew that very second I had just put a fatal arrow through one of the biggest Muleys and if not the biggest Muley I have ever had the chance to hunt in my life.   Chad being only 100 yards away waiting patiently heard the “thwack” and had actually watched the deer run about 80 yards and fall over!   He came down to where I was and tackled me yelling “he’s down!” ” he’s down!”   It was the most exciting, rewarding and most grateful hunting memory of my life.

Knowing it was a team effort and this deer was all of ours, not just mine.   It could have been Chad or Andy to make the kill but on that particular day God gave me the opportunity and I made it count.  This deer is as much Chad and Andy’s as it is mine and it truly is a Buck of a Lifetime!