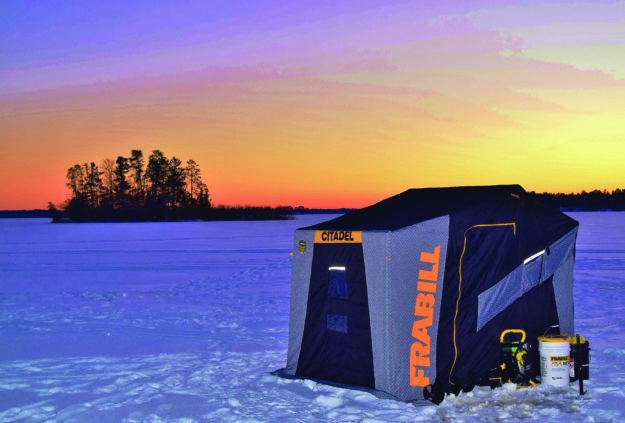 And so it begins.  The wait that just torments us ice heads – the thermometer is dropping and our anticipation is climbing.  The combos have been lubed up, line refreshed, and the best lures tied on… at least for this week.  My wife may or may not have caught me in the garage a couple times, just sitting in my ice shack… but I don’t blame her envy.  I look out my window, and I see the beautiful sight of the white flakes dancing across the lawn.  Everything needs to be ready.  You never know, we could get a foot of ice overnight; then it’s go time.  I look over at the calendar and the unfortunate reality kicks in – it’s only November.
Last year, I found myself a nervous wreck during the [weeks] leading up to first ice.  The temps would drop creating an inch or so of ice, ultimately resulting in the temps rising and the ice becoming nothing but a memory.  This went on for a good month.  On December 20th of last year, I finally walked on water.  It was an awesome feeling.  While I couldn’t go out further than a hundred yards or so, it was something to start with.  Looking at the forecast, I knew I wouldn’t be Poygan Poundin’ anytime soon… so I knew what I needed to do.

I need ice like a squirrel needs a nut.  Without me having any, I needed to go find it.  The hard water needed to be somewhere closer to my home on the Lake Winnebago System, but obviously somewhere that had good ice.  I started looking through past forecasts, online fishing forums, calling local bait shops; it was sure an ordeal.  I found that the Tomahawk area had some decent walking conditions so the search was narrowed.  Traci, my wife, found a nice cottage on Lake Nokomis, which ironically had a reservation cancelation during our projected dates of stay.  After finding that out, our names filled their dates.

Now, to be completely honest, I had never heard of Lake Nokomis.  I started doing more and more research.  I purchased a topographic map and began scouring various sources, including YouTube, with very little results as where to start.  I began calling local businesses (even a Post Office) to dig up as much info as I could.  The thing that many people forget is that while a business might sell something like pizzas, the people working there have their own hobbies, which I’m sure is not working 24/7.  After doing as much research that I could, I was able to conclude that tip-up action was the thing, and thanks to my topographic map, I had an area to target.

Usually working on the Lake Winnebago System, tip-up fishing is really never the norm as the more successful fishermen tend to find themselves in a run-and-gun style of fishing, for the most part.  While a live minnow can certainly catch fish, the problem is that when you are fishing such a large body of water, you could easy not have a single fish swim under your tip-up for eight hours.  That’s just the way it goes out there.  So even though I was out of my element, I needed to get my ice fix.  As I would soon find out, I would certainly get it.

On the way there, we stopped at a bait shop where I picked up various sizes of minnows.  I was feeling a bit adventurous and bought a couple of chubs because the research had indicated that there were some big ol’ toothy critters in the lake/reservoir.  The dude that helped me was a nice fellow who confirmed my research by hinting, “Up here, tip-ups are our thing.  We don’t like moving and the fish agree.”  Totally some relaxing yet refreshing words right there!  We parted ways and onto the last stop: the cottage. 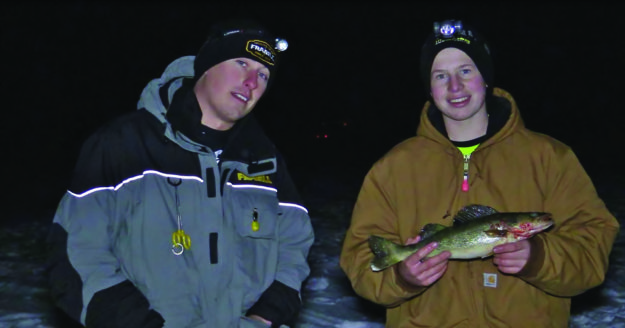 The cottage had a very warm feel to it.  Maybe it was the nice furnishings or maybe it was the fact that every time I looked out a rear window, I was staring at a frozen, almost ghost-like echo of a lake.  It was calling me, and my excitement to finally wet a line was overwhelming to say the least.  For those who have the ice bug, as with the musky bug, you know what I speak of.  It’s just a part of us… and with that, we want to be efficient and effective while using the gear that we “need.”

We work hard for our money, and we spend it where it needs to be spent (and if we can, where we want it to be spent).  On this trip, I sure made the purchases on the smaller odds and ends.  I think I spent over $100 on miscellaneous things!  Whether needed or wanted, my first ice endeavor was going to be perfect.  I cracked out numerous Frabill Thermal tip-ups and spun them with some newly purchased line and hardware.  As those of you who follow my media know, I love fluorocarbon.  With that said, each one of the thermals had about a three foot 8 lb. fluoro leader, leading to the 25 lb. nylon braid.  The freeze up on these tip-ups are almost non-existent due to their engineering so my spool/line was not in jeopardy of cold failure.

The timing of this trip was last minute.  Because of that, all of the rigging was done at the kitchen table of the cottage while looking out the sliding doors to the lake that was just screaming my name.  It was hard.  I had waited about nine months for this and the time had come.

With the rigging done, I suited up for the long walk that awaited me.  My brand new Citadel was loaded to the brim with probably way too much stuff, but I figured the more I brought, the less chances I had to forget something.  I made a nice pull harness, grabbed my spud, strapped on my life jacket… I was gone.

I made it to the edge of the lake and gazed upon it.  I didn’t see anyone around nor did I even see a single mark or footprint upon the lake.  My shoreline observation confirmed my initial impressions of the ghost-like feel but in seeing it up close, it was an absolute ghost town.  I’m not going to lie, I was a bit leery walking out on a lake that I had never been on.  I have never fallen through the ice, nor have I even dropped a leg in, so seeing the lake without any signs of life upon it, and going on others’ words that there was five inches of clear ice, I was hesitant.  As always, I played it slow, poking and prodding my way out.  It was sure slow moving through the fresh powder, pulling over 200lbs of equipment, but for some odd reason I didn’t feel the weight.  The only thing on my mind was icing that first fish. I made it out to the Promised Land.  Powering up the Jiffy, I quickly found out that the area I was standing on had over seven inches of ice!  Other areas had less, but overall, perfect walking thickness.  I set up the Citadel, cranked on the heater and just sat there for a few minutes, loving life without a care in the world.  I was the only one in sight on this body of water, and I was sitting in a comfortable environment, holes drilled, and a cold pop in my hand.  What could be better than this?  Fishing of course!  So onto setting up the tip-ups I went.

I varied the targeted depths on each one with the minnows between six inches to two feet off of bottom.  I tried a different minnow on each, with the farthest one out brandishing one of those bigger chubs I had purchased.  Each Thermal got a Strike-Senor (wireless bite indicator) which sends a signal to a pager when a flag goes up.  I am not the most observant, so getting a page when a flag goes up helps immensely in my ever-so distracted world.

With the tip-ups in, I kicked back, took a couple swigs of my pop, and turned on a little music from my newly purchased $10 pocket AM/FM radio.  Wouldn’t you know, a little blue grass coming through the waves! Now, life was good.  It could only get better if I heard that “Beep Beep Beep” coming through the little black box of the Strike Sensor; I didn’t have to wait long.

It’s always when you least expect it.  I think I was messing with some camera setting when the box started beeping.  I kind of paused for a second as it was certainly not expected.  When the light bulb lit, I sure went running.  Looking left and right, I finally figured out it was the chub. When I reached it, the spool was turning.  I carefully lifted it up, ready to ice the 10-pound eye.  I felt the tension and set the hook.  I was hooked up!  Within about ten seconds I had the first fish on ice – a 13” pike.  It took a few seconds to set in that my big eye had turned into this little snake, but I wasn’t too upset as it was the first fish of the year.  Little did I know at that time, there were many more to follow.

The nights went on and some very nice eating walleyes came through the hole.  Nothing big but certainly some fun, quality fish.  At times, I had two tip-ups out of the water.  The fish would sometimes hit while I was re-rigging from a previous fish… or even before the minnow hit the target zone as I was setting up the rig.  The eyes came into feed along the higher shelf in the area I was targeting, just at dusk.  It was the perfect scenario, and I was there to live the pure awesomeness of first ice in the neatest of ways.

On the last night there, I had just missed a nicer walleye at the hole, getting my arm a “bit” wet.  I was slightly bummed as it would have been one of the bigger fish for the trip.  As I was venting, I heard a voice behind me say, “Do you mind if I use your measure.”  I, of course, said sure, and here comes a young man who I had never met before, named Sam, with a nice walleye in his hands.  Sam explained to me that the walleye in his hands was his first EVER on ice.  Needless to say, I felt pretty humbled to experience it with him.  I had found my ice, caught fish, AND got to see the smile and the joy that this one fish brought to this young man.  We got some pictures and video and parted ways.  An amazing end to a successful hunt of first ice magic.

First ice is such an awesome time of the year.  No matter where you find yourself, if you are an ice nut like myself, you’re praying for a cold, fierce, and nasty winter.  If we don’t get our wishes, you know I’ll be on the hunt, no matter the distance.  If you want to see the video of the trip and the planning leading up to my Lake Nokomis trip, check out the OB Outdoors YouTube Channel (youtube.com/oboutdoor) or check out the online version of this issue on BadgerSportsman.com.

I hope you all have a fun and SAFE start to this year’s hard water season!  Until next time, “Tight Lines. Stay Dry.” – Kyle