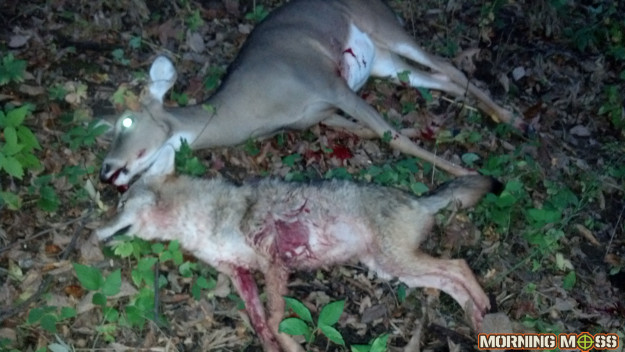 Don Fiedler was able to shoot this doe and coyote within a minute of each other on an Illinois bow hunt.

While any time spent out hunting is great, there are some days that just are unforgettable and are better than the rest. For Don Fiedler, this is one of those nights. We’ll let him tell the story of his incredible night in the woods, but as you can see from the picture, he was able to put down two animals in less than a minute.

Don was hunting in early October in Illinois in Jo Davies County and had amazing action throughout the evening.

“The action of the hunt was pretty remarkable, said Don.” “I have been hunting for 20 years and my passion has always been bowhunting and in all of those years I had never experienced what happened that evening.”

Don was not the only one hunting in the woods that night. Several coyotes were barking and growling in a thicket behind him where deer tend to bed. He knew the deer would come out and when it did, he was able to put a shot on the doe.

“The doe I shot and 1 other doe came busting out of the thicket, says Don.”

“This doe stopped at 12 yards and gave me a good shot, while she was looking back into the thicket at what just chased her out, I looked over my shoulder, after the shot, to see another doe standing about 20 yards away looking directly at the base of my tree. I looked down and there stood a coyote, teeth showing and snarling at the does. This coyote did not flinch after I shot and neither did the doe, it was a stare down.”

Soon after a second coyote popped out and came and stood by where the doe was. Don had knocked another arrow and it hit the second coyote and it took off in the same direction as the doe he shot.

“Now the other doe took off in the opposite direction and the remaining coyote ran off behind the coyote I had just shot, continued Don.” “I stood on the stand for another minute or two and composed my thoughts. I decided it was too risky to let my first doe possibly be found by the coyote I had not shot so I got down and went on the blood trail.”

“A short tracking job of less than 50 yards and I found the prize, a fat doe lying dead. I did a quick scan of the area and piled up dead under a pine tree laid a dead coyote, not 10 yards from the doe. I drug the coyote to the front of the doe for a picture to remind myself of this night, which was only the 2nd hunt of the year.”

Check out more hunting photos from hunters like you.