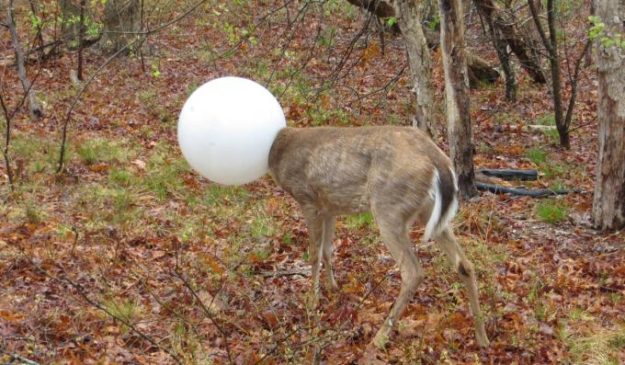 This deer had gotten a globe light stuck on its head but a New York environmental officer was able to get it off and get the deer out safely.

You’ve heard of a deer getting caught in the headlights before, but have you ever seen one get caught with it’s head in a light? We didn’t think so. Last year we saw an article of a buck with a basketball stuck in his antlers, but this is a whole different story.

Recently, the New York State Department of Environmental Conservation officer Jeff Hull came upon a deer that had its head stuck in a globe light. The deer was in the Long Island woods and had gotten it’s head caught in the light, likely from someone’s back yard.

New York Deer Gets Head Stuck in a Light

Hull was able to get the light off of the deer by grabbing the deer and holding on to the globe light. At first, the deer got away with the light but tripped over a tree. According to the department’s Facebook page, Hull threw his jacket over the deer and the globe and wrestled with the deer until the light popped off and the deer ran away.

Hull got the light off of the deer and a few nicks and bruises to go with it.

If not for Hull, this deer almost certainly would have died. It wouldn’t have been able to eat or drink and would probably have ran into plenty of things and panicked. Luckily this officer did a great job and saved the deer.