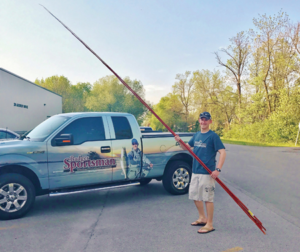 We can all look back and remember that time we landed that big fish or that time we were out on the water and something unique transpired. Growing up, I was able to be a part of many fun and exciting fishing moments. One of these memories had recently been flashing into my mind more and more so I decided to relive it the best I could: cane pole fishing with gramps. Even though gramps passed away last year, I know he’s always out fishing with me.

I called around to the local bait shops and sporting goods stores looking for a true cane pole, one-piece, at least 14’ long. While they were very hard to track down, I found some 16 footers at Critter’s in Winneconne. My wife, Traci, and I went and picked them up, and needless to say, she sure had some laughs as I was carrying them out to the truck. Something tells me she had her common thought of, “Kyle and his new idea… here we go again.” I got those beasts loaded into the truck, but they certainly didn’t fit in the bed so Traci had to hold onto them in the cab while we headed home. I’m sure it made for a fun sight to see as they whipped around in the wind…

There are many ways to rig a cane pole, but it is all dependent upon the cane itself and the tactic you plan to utilize them for. Some of the “fancy” cane poles on the market break down to two or more pieces for easy storage and some even have eyelets for stringing line. I wanted to go as basic as possible like we used to do so I didn’t have anything to run the line through or anything to affix it to. When I say basic, I mean a true cane.

I grabbed some 12 lb. monofilament (mono because it stretches) and some duct tape (duct tape is an amazing thing, by the way). I started on the tip of the cane. After trimming the tip down to a nice joint, I tied an arbor knot, (visit www.BadgerSportsman.com for a how-to video featuring Kyle) sliding it up the end, right before the joint. I folded the line down to the width of the duct tape and whipped on about a 6” chunk, folding the line back and forth over the duct tape as I wrapped the tape around the tip. After that, the line was trimmed to the length of the cane but with approximately 3” in excess to be used for the final knot to the hook.

Pretty basic, right? Some can get extravagant and start with the line at the butt of the cane, wrapping it around the cane all the way to the tip. Some might add excess line in the middle of the rod with another anchor point in case the cane’s tip would break. I have never had an issue with how I rigged it, but how one rigs it comes down to their personal preference.

After the line was strung, it came down to a simple slip bobber rig, seeing that is what I planned to use them for. The one small difference here is that instead of a baitholder hook, I finished up with a small 1/16 oz. jig. If the knot is tied correctly and your guestimate on line length was correct, you will complete the rigging with a slight tension of the line to hold your jig in the hollow, butt portion of the cane. I got the four canes rigged and ready so it was time to hit the water in the hunt for my “Walter.” 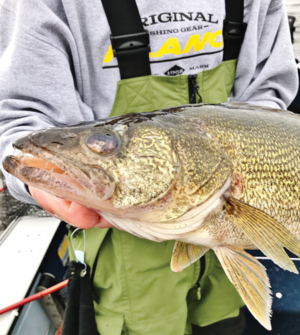 Right now on the Winnebago System, there are fish being caught all throughout. The massive abundance of forage and the cooling temperatures have really scattered our beloved walleye and some have found it pretty hard to put fish in the boat. Looking at recent tournament numbers (as of writing this article) baskets are certainly lower with some winning weights coming in at 6-10 lbs., but this can also be contributed to nasty fishing conditions. With that being said, during this time, I find myself targeting fish with a very slow presentation and that includes slip-bobbering. The locations remain the same (reefs, transition areas, rocky points and shorelines), but moving to find fish that will bite is an absolute must. Hopping around until we see a bobber plop or until we feel a tap on the jig rod is needed because, as previously mentioned, these fish have a lot of forage to fill up on and we must find active fish.

The first day out we were facing some unfavorable conditions… a strong 15mph northeast wind with gusts up to 20mph and rain that was sometimes heavy. You know you’re a die-hard when you arrive at a usually bustling boat launch, and you are the only one there. It’s actually a pretty eerie feeling, but we launched the boat and headed to the spot. While I needed three anchors to keep my old tub steady, we were in a key location on our system for the conditions we were facing – a windblown point.

I reached for the canes and brandished each one with a fat leach. The canes worked out pretty darn good in the wind as they helped to keep the lines straight and the spacing constant between each rig. As the waves splashed into the side of the boat and over onto us, the bobbers started popping! A few nice eaters showed themselves, ultimately to return into the stained waters as a way of saying “thank-you” for proving to me that the old cane pole rig still has a place here in my boat.

As a small but strong red blip on the radar approached, we decided it to be best to head for shelter. As we waited it out, I told the well-known Poygan Pounder, Mr. Ryan Kallas, that we needed to head back out as I knew there were fish to be had. When a break came, we were back on the spot.

Now what I am about to tell you is certainly a fish story, but it is a provable one as it was all caught on camera. We had saved a couple fish in the livewell for a video fishing report for the OB Outdoors Facebook page and after I got the camera out and microphone going, I pulled the two fish from the livewell and got ready to film. I turned around and looked at the two cane poles that were just bouncing around in the waves, but I could only see one bobber. With the camera going, I studied the water to pinpoint the bobber. I located it just hovering slightly under the surface to the right of the far cane. I grabbed the pole and set the hook. For a second, I thought I was snagged on bottom but the line started moving and that cane bent over like you wouldn’t believe. At first I thought the fish was a catfish, but then I saw it, a complete pig of a walleye (for our system) with my small jig hooked into the tip of its beak. I reached out as far as I could with my net and it rolled in, the jig popping out as soon as it hit the basket. What an awesome feeling!

As I was taking pictures of the fish, I noticed it had only one eye. Then it hit me. When I was four years old, I caught a fish very similar in size on a Fisher-Price rod/reel combo (a toy) and that walleye also had one eye. Besides being with a couple of family members, guess who was piloting the tin can? You got it, gramps. It was a story our family talked about for years, the one-eyed walleye on a Fisher-Price pole.

Now some might say, that’s a pretty cool story right there, but there is one more detail to make all the more memorable… we were in the same location, 26 years ago, almost to the day, when I got the first one-eyed walleye. I think it’s certainly safe to say that even though I couldn’t see him, I was fishing with gramps with cane poles again. This was an experience that gets me choked up to think about, even as I write this, and this fishing story is the one that I don’t think I will ever top. That is what fishing does, it builds memories that can last a lifetime.

Cane poles are a fun way to put fish in the boat. They have multiple uses on our system, not just in the slip-bobbering area. Cane poles can be used to drift with live bait rigs, troll cranks at shallow depths, precisely work weed pockets, and even run river-rigs! They are cheap to purchase and to rig. If you are looking for something new to have fun with, pick up some cane poles and experiment with them. As you can see in the pictures and the video, they work, even when the bite seems to be tough. We don’t always need the best equipment to be successful. High-end equipment can certainly help, but it’s not absolutely needed to catch big fish. It all comes down to the basic principles, and like I always say, location, location, location.

As we slip into the deep summer months, I hope everyone has been having a blast so far this open water season, no matter where you find yourself! Before long, we will be out in the stained depths of the wastelands of Winnebago, on the hunt for some of the hawgs our system holds. The question will be, can we get them to bite?