Calvin Krusick shot this 10 pointer during the first week of the Wisconsin archery season in Central Wisconsin in a town called Shantytown.

Calvin Krusick had a nice surprise during the opening week of the Wisconsin bow season. Calvin is a friend of the team here at MorningMoss and is not usually known for his success rate when it comes to white tails. Usually, Calvin spends his time in a bow stand sleeping or snap chatting potential female suitors, but last week a deer that had some head gear walked by and to everyone’s  surprise, he managed to put an arrow in it. 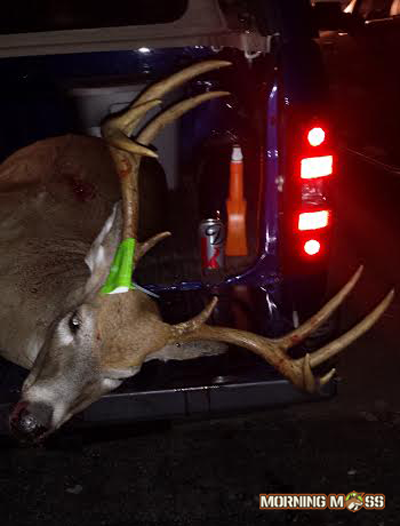 All kidding aside, Calvin put down a nice buck in Shantytown, Wisconsin last week. The deer was a 10 pointer that Calvin has had trail camera photos of for a couple of years. He thinks that it’s a 3 year old and the deer taped out at 135 inches. It has an 18 1/2 inch spread and a nice big body on it.

Congrats Calvin and good luck the rest of the season. Be sure to send your trophy deer photos to us by submitting them to MorningMoss.

Check out more Outdoor News and the latest big bucks shot in the country.