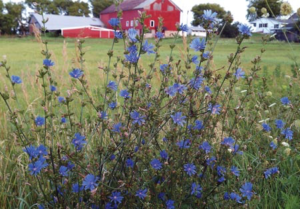 Over the years, plant breeders have spent tremendous amounts of time and money trying to produce flowers that bloom in beautiful blue, but haven’t had much success. Mother Nature, however, easily hit a home run the first time at bat with chicory. Its pure sky-blue blooms line the gravelly edges of Wisconsin roadsides, abandoned railroads, parking lots and vacant lots from July through October.

Chicory is easy to recognize and remember, first by its breathtaking blue blooms, and second, by its scraggliness, well okay, ugliness, when not in bloom.  A basal rosette of dandelion-like leaves hugs the ground. A rather ugly stalk about the diameter of a pencil shoots from the center of the rosette in mid-summer. Leaves and knobby buds are spaced alternately along the stem. Leaves are bristly, dark green, spatula shaped, 3 to 6 inches long, lobed, toothed and sometimes curved.  Stems grow to two or three feet tall and are filled with a milky sap.

Then, one day in July the sun comes out, the temperature is just right, and by mid-morning exquisite 1 ½ -inch blooms open up and down chicory’s stems and it doesn’t matter at all how ugly the plant was just an hour earlier. And will be again by late in the day – the flowers close again by mid-afternoon.

Chicory was brought from Europe by early colonists.  It escaped cultivation and has become naturalized. It is not considered an invasive plant. Not yet anyway. It is a perennial plant that reproduces from seeds or from root parts if small pieces are left in the ground when the plant is dug.

All parts of the chicory plant are edible, but most well-known is the use of the dried roots as a caffeine-free coffee substitute. Chicory has a deep taproot, which can be dug, scrubbed, chopped and roasted. It was often used as a coffee substitute during World War II when real coffee was unavailable and is still very popular in Louisiana where it is called creole coffee.

Young chicory leaves are good mixed with other greens in salads, cooked with other potherbs and eaten with butter and vinegar or salt and pepper, or chopped in stews or soups.  The leaves are bitter so unless you like bitter, boil the leaves for five minutes, drain, add new water and boil an additional five minutes.

Like many wild edibles, chicory is good for you.  It contains calcium, phosphorus, iron, carotene, thiamine, riboflavin, niacin and vitamin C. It is used as a tonic, diuretic and laxative.  Chicory root coffee benefits jaundice, liver problems, gout and rheumatic complaints. 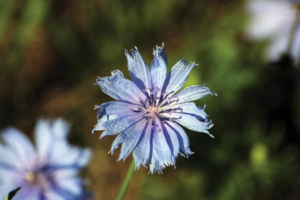 Dig roots in late fall.  Scrub well, but do not peel. A plastic scrubby or bristle brush works well. Let dry.  Cut into pieces of similar size. Roast in 300° oven until brittle and dark brown. Check after an hour and every half hour thereafter.  Length of roasting time depends on thickness of roots. Break into small pieces and grind in a coffee grinder if you have a strong grinder.  You can also chop it by hand into small pieces.  Store in glass jars with tight-fitting lids. Pour about 12 oz. of boiling water over 2 tablespoons of root. If you find you don’t like pure chicory coffee, try adding just one part chicory to four parts coffee.  The chicory adds an extra richness of flavor and depth of color to plain old coffee.

Dig, scrub and peel the roots.  Slice into thin strips.  Roast in a 250° oven for about four hours.  Grind the roasted roots.  Store in a glass jar with a tight fitting lid.  Add one teaspoon of ground root per cup of water. Boil for about three minutes.

The crown of the chicory plant is the area just below ground where the stem meets the roots.  Crowns can be cleaned and eaten as a vegetable.  Boil for five minutes and serve with butter.

Harvest chicory flowers mid-day. Remove the sepals (the green parts just below the flower petals).  Bring water to a boil, add the petals and turn off the heat. Let the petals steep in the water for 24 hours.  Strain off the liquid and measure it. For every four cups of liquid, mix in a package of Sure-Jell. Bring to a boil.  Just as the mixture comes to a boil, for every cup of liquid, add one cup of sugar, one teaspoon of orange juice and a small piece of orange peel.  Cook until the mixture slithers off a spoon.

Gather fresh chicory leaves early in spring.  Wash the leaves, then plunge them into boiling water.  Cook 5 minutes. Drain and taste. If too bitter, repeat the boiling. Drain again. Heat olive oil in a pan. Finely chop two garlic cloves and add to oil. Add chicory and cook just until it heats through.  Salt and pepper to taste.

Chicory leaves can be blanched (made white or pale) by covering plants with a box or pail for a week before harvest. This reduces bitterness. Harvest two cups of blanched leaves. Rinse thoroughly. Add ½ inch water to a saucepan and add the leaves. Add a ½ teaspoon salt, 4 tablespoons butter or margarine and 2 tablespoons lemon juice.  Simmer for 45 minutes.  Serve hot in the juice.  ** Sometimes blanched leaves are still slightly bitter and have to be cooked in two waters to make them bland.  It’s really a matter of taste and trial and error.