Battle On Bago On Foot! 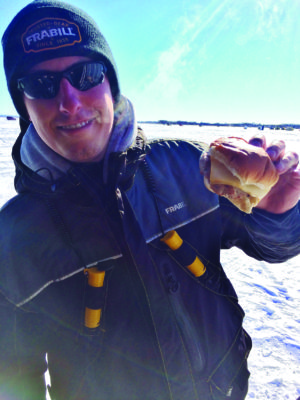 When you get a chance at over $275k in prizes, including two trucks and two boats, just for catching a fish… well, that’s what you call an ice fishing tournament!  With the offerings and festivities so great, people come from all over to take part in the Battle on Bago.  It’s an awesome time.  Chances are if you are reading this, you have probably heard of it, much more likely fished in it.  It’s a blast.

For those who haven’t heard of it, the tournament is held in Oshkosh, WI and covers all of the Lake Winnebago System.  It’s not just a one species tournament as it includes walleye, white bass, and panfish.  Any of these species can unlock the door to the MANY prizes on the list.  Besides the prizes, another awesome aspect of this tournament is the way in which it is run.

To sum it up, last year, the largest fish (6.1 lb. eye) caught in the tournament won a cooler, while a 1.3 lb. perch took home a brand-new Lund fishing boat.  It’s a skilled drawing, so to speak, and the places and prizes jump around randomly.  Because of that, it gives anglers of all skill levels a fighting chance.

If you have fished the Winnebago System or have seen any of my videos or fishing reports, you know to be successful out there you usually need to move to find the fish.  Even when you keep moving, this only magnifies the fine line between a bad day (if there is such a thing) and a lights-out action kind of day.

The easiest way to travel, in my opinion, is via snowmobile.  Sometimes we don’t have the snow or stable ice conditions to allow for its use, or maybe we don’t have one at all.  If you can’t afford a snowmobile, four-wheeler, or a four-wheel drive truck, you can still catch fish as I will explain.

As we have done for a couple years now, Glenn Curran (Battle on Bago committee) and I went all over the Lake Winnebago System, assessing the ice and launch conditions and publishing our observations in video format.  We talked to a lot of great people and everyone had the same opinions – no vehicle traffic for Lake Winnebago – and that’s what was promoted.  I got to thinking (a scary subject all in itself) about that recommendation, and it stuck with me.  I had access to a “wheeler” and a “sled” but what if the next guy or gal did not?  Well, the idea formed and I decided to attack the ever challenging, yet rewarding, Lake Winnebago via foot.

The night before, I spoke with a few out of state friends who had never fished the Lake Winnebago System before.  They did not own “sleds” or “wheelers,” and all the vehicle bridges were removed from Lake Winnebago off Merritt Ave.  The only two options were to either drive out on the upriver lakes or to walk out on Winnebago.  They chose to hoof it, and I gave them a rundown of the fishing and talked about working a grid pattern.

Breaking down the mudflats, aka the Wastelands of Winnebago, the grid pattern of fishing is really the best way to do it… if there even is such a thing.  It is a very simple, systematic way to break down and eliminate water.  This idea best works with at least five people, and an example is shown here with each fisherman being represented by a different colored dot.

If you notice the movement in the pictures, the fishermen are leapfrogging each other and it continues to the east.  This direction of movement doesn’t have to be to the east and it can be in any direction.  The trick comes into play when someone starts marking fish.  Everyone will then regroup next to each other within a 30’-40’ area, keeping the original format.  If one hole remains hot, its ownership can be rotated after every few fish or so. 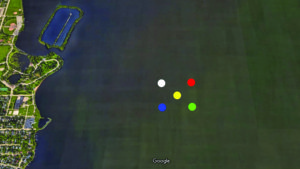 It is important to keep this same pattern and not all bunch up extremely tight because usually the school will decide to vacate the area.  If a different hole becomes hot, we can then obviously say the fish have moved in that direction, and thus, the others will then flip locations to keep the fishing grid around the active hole.  After a while, the school movements will be shown on the GPS waypoints which you will certainly be using to mark your progress.  This idea really isn’t a fool proof way as many factors can change the school’s movement or they can slip away between holes… but in my opinion, it is the best method to the crazy madness the wastelands can present.

With the game plan set, the day came and out from Merritt we went.  A mile or so already under our belts, and it was time to rip some holes.  I was so happy to drop down and totally ready for the screen to light up like a Christmas tree… yeah, the screen was empty.  After about ten minutes, it was on to spot two.  As I looked over and waived to the others, they decided they were still setting up and said they were going to give it some more time in the original spot; I didn’t blame them.  They were here to relax and have a fun time.  This would be the last I would see of them until the fishing was done as they decided to give it their all in the first spot.  Good thing they did as two white bass did come in, one winning a prize!  I, however, was looking for one of the many schools out there as I had multiple tickets to fill.

Spot after spot the waypoints grew.  I was now fishing by myself with over 130,000 acres to cover.  What a lake.  Seeing I had lost four corners to the originally planned grid pattern, I had to move in a zig-zag format.  I used the contour lines on my GPS as reference points to keep something of a system going.  I’d hit three or so spots within a contour moving south in the contour, before moving east, farther into the abyss.

Pulling my shelter with my auger and necessary equipment inside was a workout.  There was no joke about that.  I iced a couple of whities in the 14FOW range on possibly spot 25 but could not find the full center of the school.  I utilized the grid pattern process to section off the area from the original fish’s location but just could not come up with them.  I figured that I either completely missed the movements or it was just a very small school… so on I went.  I was working again, southeast from my northern starting point.

It was into spot 30 or so that the time and the effort I had put in began to show.  My steps began to feel harder and the weight of my equipment seemed to drastically grow.  These are the times that you begin to think that there just are not any fish in the lake.  In these instances, you must remember the memories you have from some of the hot schooling fests the system offers; it’s the only thing to keep you pushing on.

Well I kept trucking and onto spot 43… or was it 44?  Whatever the case, this was the spot.  I was roughly sitting in 17FOW, approximately three miles southeast of Merritt, when I dropped my ducer down to what I originally thought was hump.  Nope, it was fish hiding the bottom!

I’m going to tell you I was excited but the word “excited” doesn’t do it justice.  My lower back and feet were throbbing, my back dripping wet in sweat.  I grabbed one of my combos from my self-branded “Bago Box” and rushed that small jigging shad rap down to the waiting fish.  Presentation methods and other tactics used, have been discussed in my previous articles so be sure to check them out in Badger Sportsman’s on-line archive at BadgerSportsman.com!

The action was heavy, then it would die.  I thought about moving a couple times but just as I would begin to make my mind up, the marks would appear.  Little did I know I wouldn’t be moving the rest of the day.  After a while, I realized the school I had landed on was making a small circle underneath my feet.  If you notice this and you are fishing by yourself, it is sometimes better to just wait out the 5-10 minutes it takes for them to come back, rather than attempting to find their focal point.  You can easily guess wrong and I have been there many times wishing I had not been so greedy.

I was catching fish, staying warm, relaxing… a true way to finish off the day and such a fun reward.  The one problem with this spot was that I was not catching any big fish.  All of them were coming in at less than a pound.  I had tickets to fill, and I just wanted to sit back the next day and enjoy the festivities around the tent, so I decided to take the long walk back to Merritt.

It took me well over an hour on the three mile walk back to Merritt, but I made it. What an awesome sunset to walk into! Many people along the way stopped and offered a ride back.  While every bone in my body wanted to accept their nice offers, I knew I couldn’t honestly write this article if I cheated and snuck a ride back.  I weighed in the fish, opting a whitie for a perch thinking the pool wasn’t going to be so hot, and waited for the results the following day…

This was my fifth year fishing the Battle on Bago, and to date, I have still not won a prize.  I had been close on some fish throughout the years but no dice yet again!  As I said to start out with, this is a great tournament and I wouldn’t want it any other way!  I know of soo many people who have won fantastic prizes over the years, some of which had been fishing with me.  I figure one of these years I will land big time in the magic numbers.  A new F150 would be nice.  It’s always nice to dream, but you never know, a dream can sometimes turn into a reality.

As I like to say surrounding everything, work hard and you will succeed.  I worked hard, filled my tickets, and got on some fun fishing action to boot.  You don’t always need the best equipment to be successful on the ice, but it sure does help.  I will tell you that this year, I will not be walking out.  I did it to say I could do it and show that it is possible to still catch fish while on foot.  Not just for the Battle, but for all periods surrounding the hard water season on the Lake Winnebago System.  Safety is the number one goal in my book.  So, remember, if conditions don’t allow and you don’t have any other means of transportation, know you can still catch fish while walking out on the hard water on the Lake Winnebago System.