Backed by a personal guarantee from company president Anthony Imperato, Henry Repeating Arms provides industry-leading customer service to both customers and its network of dealers around the world. “Henry Repeating Arms’ commitment to the full customer experience is extraordinary, and your approach is unusual in these times,” one of the judges remarked. Mr. Imperato states, “It’s all about the customer at Henry Repeating Arms and its starts with my personal guarantee. If you are going to spend your hard-earned money on a Henry then we are going to do whatever it takes to make sure that you are 100% satisfied. Our Customer Service Supervisor, Tom Kotz, and every Henry Repeating Arms employee is empowered to do whatever it takes. And typically we go beyond customer expectations, going the extra mile and leaving a lasting positive impression with our customers. We are proud of our industry leading reputation for extraordinary customer service at the consumer and dealer levels.”
Since mid-2014 the Henry Repeating Arms Facebook page has grown to over 430,000 followers. A mix of daily, engaging content and personal fan interaction creates a welcome atmosphere for all Henry enthusiasts to ask questions, make suggestions, and share their experiences. The Facebook page is also providing an effective avenue of communication for any customer support related inquiries.

“With almost half a million fans following us on Facebook a new avenue of communication has opened for people to get in touch with us 24/7. Our Social Media Manager, Dan Clayton-Luce, continues to deliver the content our audience enjoys while providing a level of personalized engagement you don’t find on other large Facebook pages,” explains Mr. Imperato.

The American Business Awards are the nation’s premier business awards program. All organizations operating in the U.S.A. are eligible to submit nominations – public and private, for-profit and non-profit, large and small. More than 250 professionals worldwide participated in the judging process to select this year’s Stevie Award winners. Details about The American Business Awards and the list of 2016 Stevie winners are available at http://stevieawards.com/aba/2016-stevie-award-winners. 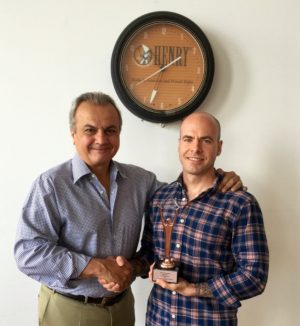 Henry Repeating Arms is one of the country’s leading rifle manufacturers. Their legendary name dates back to 1860 when Benjamin Tyler Henry invented and patented the first practical repeating rifle during the Civil War. It became known as the “gun you could load on Sunday and shoot all week long.” Henry rifles went on to play a significant role in the frontier days of the American West and soon became one of the most legendary, respected and sought after rifles in the history of firearms. President Lincoln’s Henry hangs in The Smithsonian and has become a national treasure. The company’s manufacturing facilities are in Bayonne, NJ and Rice Lake, WI.

About the Stevie Awards