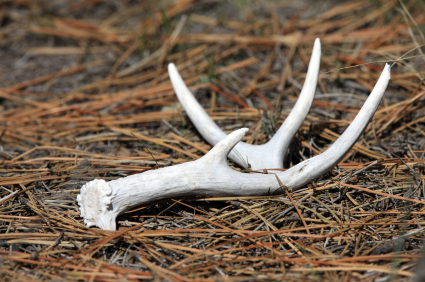 While this is not a photo of the shed antlers found in Detroit, it shows that antlers that are old can still turn up in strange places.

You probably have heard of some strange stories when it comes to shed hunting and this one is no exception. Construction workers in Michigan several years ago were digging in a peat moss bog and you will not believe what they found.  A pair of whitetail sheds laying just feet apart under 16 feet of dirt and moss.

This happened just out of Detroit and the two sheds were found in the same day, just a couple of hours apart. Thanks to the peat moss the sheds were persevered quite nicely and they were soon taken in to Michigan State University for date testing. The price was pretty expensive, $450, so they just decided to date the moss around the sheds instead. The tests came back showing that the depth of the moss where the sheds were found to be, aged at around 5,000 years old. To put this into perspective, it was right around the time when the pyramids were built in Egypt.

The buck was a 10 pointer and back in the day it would have been a pretty nice buck. After the sheds were recovered, they were stored under different conditions to see how fast they would dry up. The one stored on a shelf started to show signs of age quite rapidly, while the other one stored in a bin with peat moss remained almost the same.

It is crazy to think that we spend countless of hours above ground looking for sheds and most of the time, come up empty-handed. To find these sheds 16 feet below the surface is both amazing and very lucky. It just goes to show that the deer hunting world is always full of surprises.