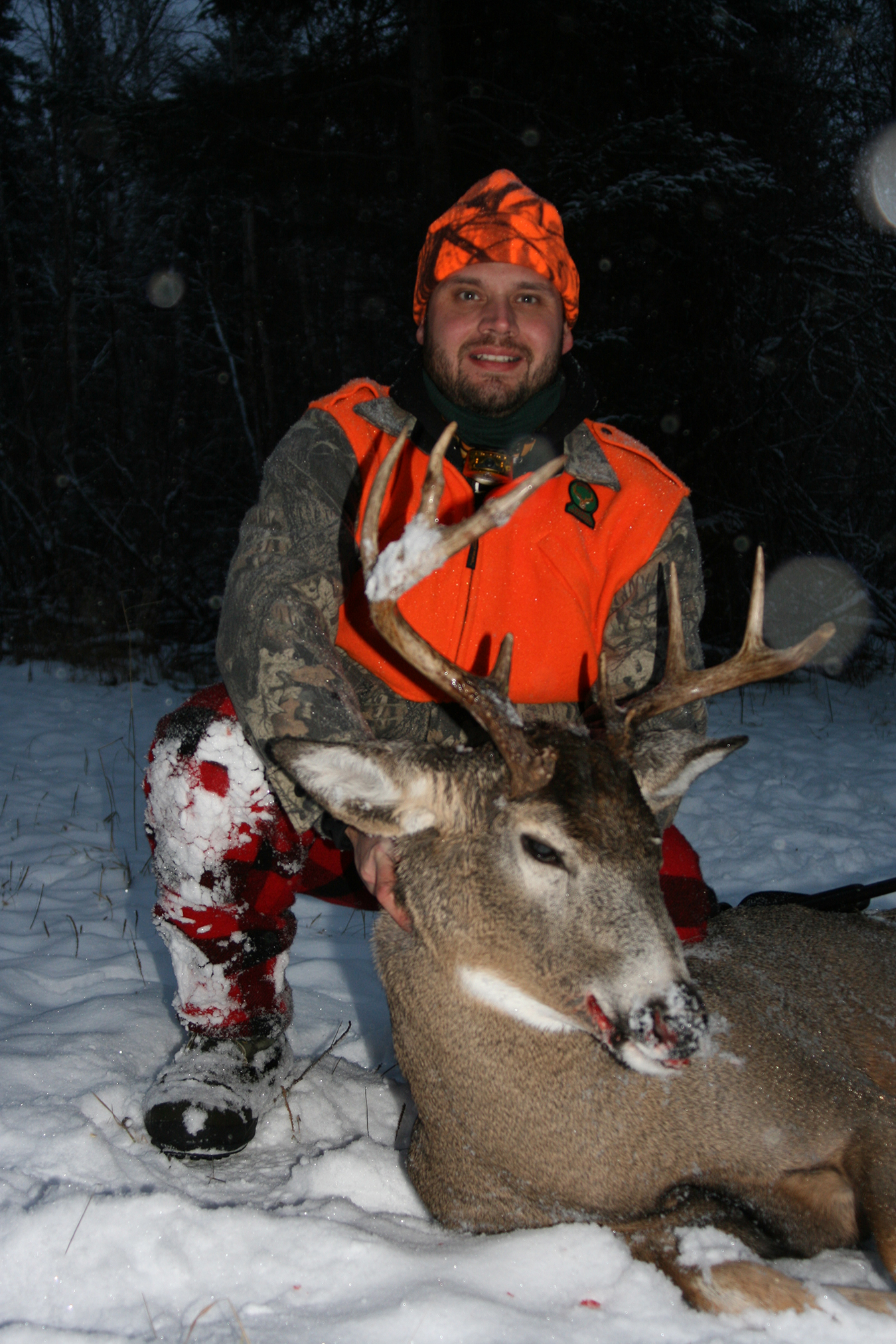 Want a sure way to harvest a mature whitetail buck this year? Track one down by using a technique that I’ve been perfecting over the past 14 years. While I can’t promise the harvesting part, I can promise that if you find the track of a mature buck and follow it, you will be in for an exciting and rewarding adventure. I continue working on my techniques because tracking is a process that is learned over a lifetime not a weekend. Being able to walk quietly, read sign and shoot quickly and accurately under pressure are a must for success.

When you think of the wilderness areas of northern Wisconsin, the things that come to mind might be canoeing, fishing and camping. But for me, the first thing that comes to mind is deer hunting. For the pursuit of whitetail deer, there’s no better place than a wilderness setting. Being able to hunt deer with low human contact is the ultimate throwback in hunting. Your thoughts drift back to the Native Americans and pioneers. No new fancy hunting gimmicks, just persistence and skill allowed the early hunter to put food on the table. I know these are romantic thoughts; I use a modern rifle and gear when I hunt and wouldn’t want to give these up. For me, it’s the way I hunt that makes the difference.

As I look back at the progression of the hunting industry over the years, I question if we are headed in the right direction. The industry teaches that it’s more important to measure success on how much bone grows on a deer’s head instead of focusing on the fundamentals of hunting and fulfillment one can achieve by taking a more organic approach. Most of us love big racks, myself included, but shooting a mature deer is not my primary goal. If it has a large rack, great. If not, it’s still great because matching wits with an old whitetail and winning is always an accomplishment.

The idea that you could actually find the track of a deer, follow it and shoot the deer was almost inconceivable to me the first 32 years of my life. The change came when I read an article by Larry Benoit, a deer tracking legend. Larry would find a large buck track, follow it and kill the monster deer. Easy right! Sure. That article lead me to start researching Larry. Come to find out, he has sons and grandsons that all track deer. They’ve made videos, written books and inspired me to change the way I hunt for the better. 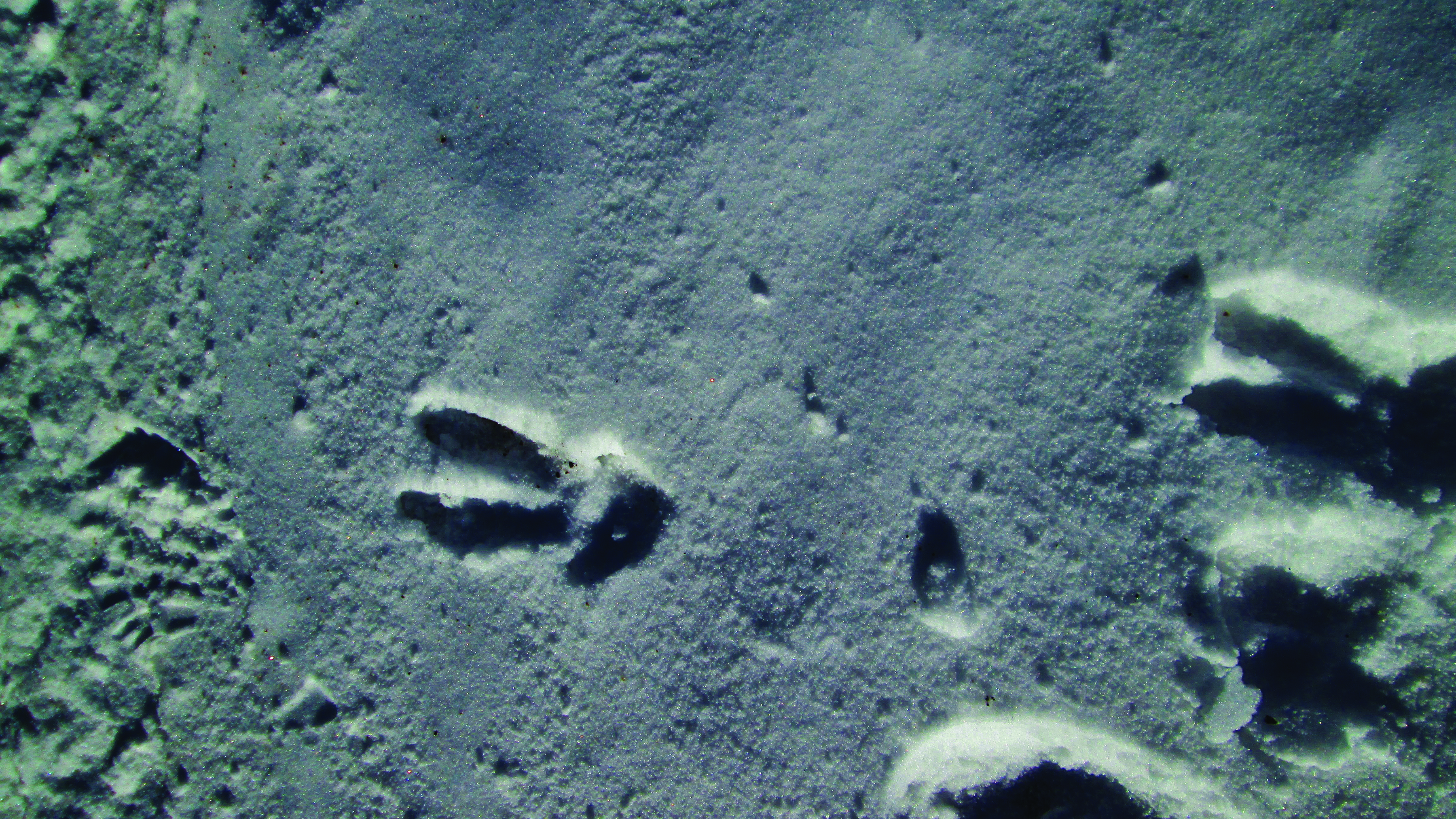 The art of still-hunting and tracking is not learned in a weekend or a season. It’s a lifetime of persistence and the will to not give up. You will be rewarded. I’ve been working at it for 13 years now; tracking and still hunting. Deer hunting in general, I’m going on 31 years. I have taken many deer, but was missing something that sitting in a deer stand over two gallons of bait didn’t give me; and that is adventure!

My first experience with the designated wilderness areas of northern Wisconsin was back in May of 2009. My wife and I set out on a hiking and fishing trip. We hiked in several miles to a lake and set up camp. We set up our tent on the edge of a lake. After setting up the tent and collecting firewood, my thoughts turned to fishing. The campsite was so close to the water you could sit by the fire and catch fish. And we did, one after another. Our poles were rigged with lindy rigs, topped off with leeches. The few days were spent exploring the surrounding area. During one of our hikes, we came across some very large buck rubs from the previous year. From that point on, I knew that hunting this area was a must.

My first hunt there took place in 2012. I loaded up my truck camper and headed up on my first solo hunt. My first order of the day was to find a place to hunt. Being from Upper Michigan, I’m used to having room to hunt, so scouting out areas with no hunters in them is a must for me. I drove until I located a few areas to set up camp. This took some time. Finding a spot to camp can be a bit of a challenge. The first spot was in the southern part of the wilderness. I found a good place to camp and set out hunting. As I eased my way through the thick cover, I saw my first rub and set of tracks.

Through the progression of the first hunt, the deer sign that I encountered was reminiscent of sign that I’ve found in Ontario. Large rubs, scrapes and large tracks; all the makings of a good place to hunt. I continued to hunt for the following three days without filling my tag.

Some people would get discouraged and give up at this point, and the thought crossed my mind. The wilderness has a way of calling you, or chasing you away. For me, it would be the call. This wilderness deer hunting is full of sweat blood and tears, and that’s just the first hour. (I’ll be back).

2013 Deer Season. I arrive just in time to hunt the few remaining hours of the day. As I drive to the area that I plan to hunt, a buck crosses the road in front of me. I get out of the truck to investigate the trail leading across the road between two ridges. Looks like a good area to still-hunt tomorrow. I got up early and started hiking my way back into the wilderness. The terrain starts off fairly easy, but this changes quickly. I’m in a mess of blow downs. I think to myself, you wanted wilderness and you got it. I get out of the blowdowns, cross a small swamp and get back up on a ridge. It’s a fairly open ridge, good for sneaking around on. I come across my first rub on a small pine and some droppings. As I work my way out of this mess, I see an opening ahead of me. It is an open marsh with a wooded island in it. As I get to edge of the marsh, I see my first fresh rub line.

When I reach hot deer sign, I like to find a good vantage point and start a sequence of doe bleats and grunts. This is a great technique when in thick woods or when conditions are noisy. I’ve had some good luck with this. This technique requires a lot of faith and patience. The trick is to not give up on it too early. I will give it 30 to 45 minutes before I will move on. The key is letting enough time pass for the deer to reach you. I know this because I’ve made the mistake of bumping a deer that was on its way in.

I follow the rub line slowly. It hooks to the left and a trail leads to a wooded island. I keep following slowly, very slowly. I can actually smell the strong scent of a rutting buck. It’s a musky pungent smell. This is an odor that you either love or hate. To me it’s a great sign. A buck is near. As soon as this thought pops into my head, a buck jumps up in front of me on the edge of the island. I shoulder my gun and fire a shot. The buck takes a few jumps and disappears onto the island. The island is thick and a great place for a buck to hide, but not very large from my point of view. I can see almost around the whole island. It is surrounded by grass and I didn’t see the buck leave. Must have got him. I keep watching. No buck running from the island. Okay, let’s check for blood. I slowly move to where I shot at the buck. No blood or hair. It’s not like me to miss. Now what?

I take a few steps forward and jump the buck again, but I can’t get a shot. I grab my grunt call and blow on it a few times, take a few steps and blow it again. As I’m doing this, my eyes are straining to find the buck. He only took a few jumps. This buck has no idea what’s going on. Thankfully we’re both confused. This has never happened to me before and the buck could probably say the same. Normally, a buck would be in the next county by now, but he was meant for me. I move forward a few steps more and I spot him. He’s expecting another buck. Too late for him. We lock eyes, my crosshairs are centered on his chest. This dance is over. He had made me sweat, fall and get dirty, but I wouldn’t have it any other way. The wilderness has taken me in and spit me out, but an eight pointer came out with me. I did miss the first shot, but I kept my cool (kind of), and got the job done. I’ve shot bigger bucks, but I never have been as proud as I am of this wilderness buck. I forgot my camera and decide to drag the buck out whole (I would not recommended this). One thing is for sure, I bet the camera will be in my pack next time. Sometime the hardest lessons are the best ones.

As the 2015 season gets into full swing, one thing is for sure, I’ll be out roaming the northern forests in search of big tracks to follow.