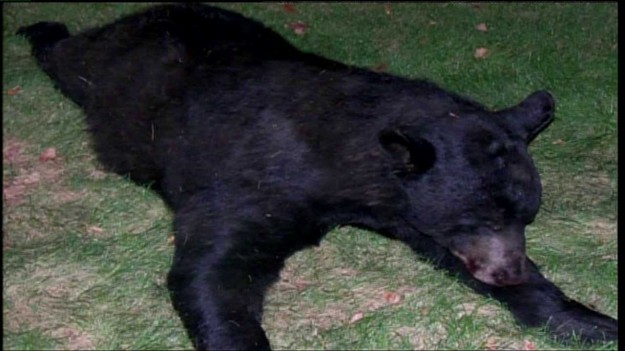 Dennis Arndt managed to kill the Bear “Sampson” that has eluded hunters for years in Waupaca county. The Bear weighed in at 780 pounds

Wisconsin black bears don’t typically top the 700 pound range, but this big black bear shot in Waupaca county this weekend is a different story. The 780 pound bear shot by Dennis Arndt near Ogdensburg is absolutely massive and the lucky hunter is still shocked that he was able to put it down.

“This is Sampson, in broad daylight, coming in, checking out the bait,” said Arndt while he watched a video from his trail camera of the bear known as “Sampson.”  The bear was known to many hunters, but had somehow eluded being killed for years. 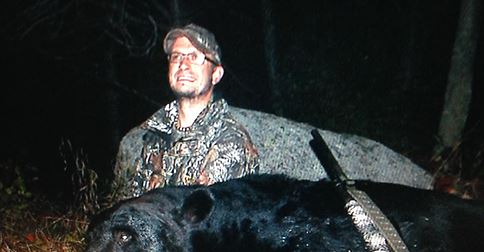 This 780 pound bear was shot during the Wisconsin bear hunt

Arndt saw the bear come in around dusk and didn’t miss his last minute chance to take the trophy of a lifetime.

“You just knew, his big head came in, you could just tell, he whipped at that log, and I’m like, ‘that’s him.’ I tried to take the clip off real slow. It just all happened so quick too,” said Arndt.

Arndt shot one time and watched the bear run into a swamp. He was shaking bad and wanted to call his friend and was fumbling for his phone. After calling his friend, they had a crew that could drag the bear out of the swamp on a sled.

Nobody had any idea just how big this massive bear was until they put it on a certified truck scale and it registered 780 pounds, they were all in shock.

The Wisconsin Department of Natural Resources says that the bear population is growing in Waupaca county, but nobody has seen bears this big there.

“Some of the bears in the Waupaca area that I’m familiar with have been in that 4-500 pound range, and I hear about one a year. But this is just an incredible animal,” said Ted Dremel, DNR Conservation Warden.

Arndt was ecstatic about this hunt and we’re sure it’s one that he’ll remember for many years to come.

Congratulations to him and hopefully we’ll see more great stories like this coming out in the next few weeks. For more Outdoor News, be sure to follow us on Facebook. Check out some more awesome hunting trophy photos right here on MoringMoss.