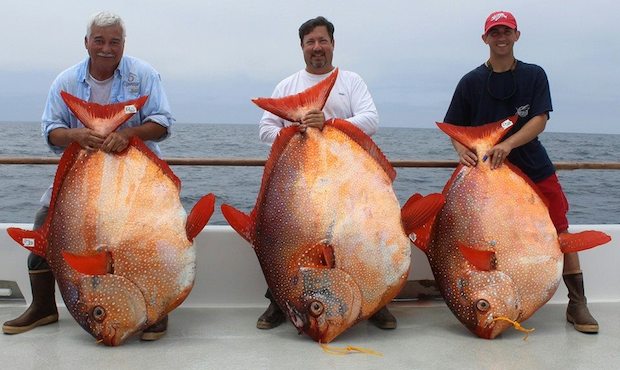 These three Opah were caught aboard the sport fishing charter, Excel on the same day. It’s very rare to catch more than one Opah in Southern California.

When you fish with the San Diego-based Excel charter boat, you are likely going to have a successful trip full of tuna and yellowtail, but nobody was expecting the success that they have experienced lately. Recently, the charter boat managed to catch three massive fish that are incredibly bright in color and look like the moon.

These fish are called Opah and they weighed 151, 180 and 124 pounds. They were caught by Armando Castillo, Joe Ludlow and Travis Savala. It’s really rare to catch an Opah on a Southern California sport fishing boat, but to catch three on the same boat on the same day is incredible. The Opah fish do not typically swim in large schools and are founding tropical and sub-tropical seas. They usually swim in very warm waters and it’s pretty rare to catch one in California.

El Nino like conditions in Southern California is what lured the tuna and yellowtail into the area and that’s what probably brought the Opah as well.

People have gotten really excited over the fish and have been commenting on their Facebook page. We’re sure that their trips just got much more popular too.

Opah is a very good fish to eat and is served in many restaurants. There is not a commercial fishing industry for it since the fish aren’t found in large schools.

The Excel boat said that five opah were hooked at about the same time Friday, but only the three were landed.

What’s the coolest fish you’ve ever caught? Submit it to us and we’ll post it up on the site.