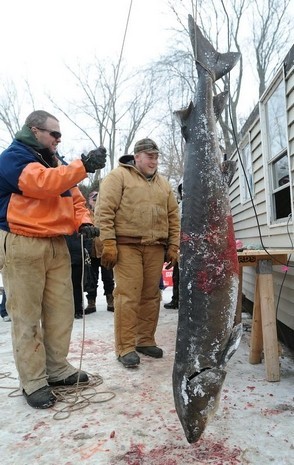 Customers at a table at the Famous, “Wendts on the Lake,” located on Lake Winnebago near Fond du Lac, WI had a front-row seat to see the steady line of cars easing down the boat launch and onto Lake Winnebago.

The hundreds of cars fanning out across the lake could only mean one thing: Wisconsin’s 2014 sturgeon spearing season is upon us.

Wisconsin is one of only several states that allow a sturgeon-spearing season, and it’s a season steeped in tradition. The first sturgeon-spearing season in Wisconsin was in 1903, and many fishermen and their families who participate have been doing it for decades. This year 11,823 licenses were sold and after this first weekend, the quota has already nearly been met. The Wisconsin Department of Natural Resources counted over 4,000 shanties on Lake Winnebago and many of these housed multiple fisherman.

Once the spear fisherman make it out of the bars and onto the ice they were treated to one of the best opening days in history. The last few years have been rough on Wisconsin spear fishing on Lake Winnebago and the upland lakes. This year that was not the case. In 2013, fisherman speared only 39 fish on Winnebago and 179 system wide. This year they brought in a total of 878 sturgeon system wide and 636 from Lake Winnebago. Sturgeon registration stations were packed and with the season ending at 1 p.m. they were still registering sturgeon at Wendts on the Lake until 4 p.m.

No record fish surpassed the 212 pound behemoth taken in 2010 but the largest fish of opening day was nothing to scoff at. The fish came in at 143.9 pounds and was registered by William Zahringer of Hilbert, WI. The fish was registered at Harbor Bar in Stockbridge, Calumet County. The fish was an impressive 75.4 inches long.

The history of Wisconsin’s sturgeon spearing not only is represented throughout families that continue to hunt these fish each year, but also in the work they take to perfect their traditions. Many of these people use hand carved decoys that come in many shapes, sizes, colors and designs and they take pride in the work of these elaborate tools. Others use bowling balls and PVC pipe. The sturgeon get curious as to what is at the bottom of the lake and come to check out the decoy, allowing the spearer to throw at them. 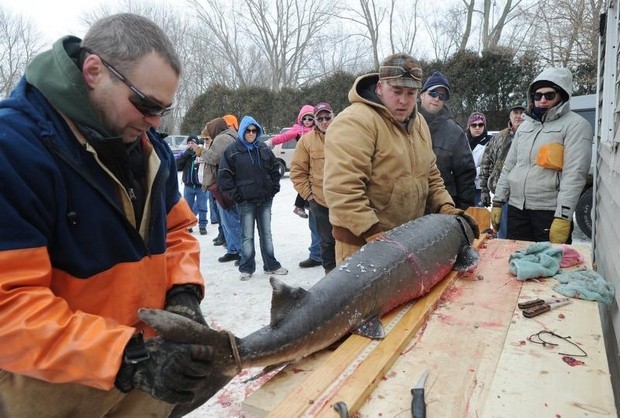 The visibility on the lake this year was reported to be 14-16 feet throughout most of the lake. These are some of the best conditions in the last 10 years and the ice was more than thick enough to drive on, 24-30 inches.

Success rates were high this year and there was also no shortage of giant fish. The Wisconsin DNR reported five sturgeon over 100 pounds registered at Stockbridge by noon — the biggest weighing in at 129.9 pounds. On Saturday 50 sturgeon were brought in that weighed 100 pounds or more.

The season is sure to end early this year, but will be a great one for many of the people who participate in the fun. Send us your successful fishing and spearing photos and we’ll post them on the site.