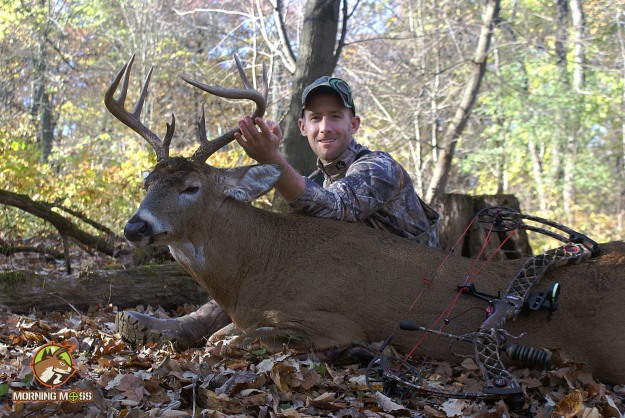 I’ve found that in the area that I hunt, the days leading up to Halloween are usually some of the best there are. The 2014 season didn’t change that. On October 26, I got out to my stand at 6 am, giving myself almost an hour before daylight. I quietly snuck in, set up and waited. I could hear deer moving around me, but was hoping that they wouldn’t circle to the downwind side before hunting opened. When the gray light appeared, I could make out several deer in a 50 yard radius, including a nice buck. I immediately grabbed my bow, stood up in the stand and was ready to see if something walked by.

Between 6:50 and 7:15 a.m. I saw 8 different bucks. I was watching one behind me, when I turned around and saw a very large one in front of me. I turned my attention to that one and he made a loop to start coming towards me. This buck finally made it in range by me but didn’t present a clean shot. While I was watching him, another one (the buck in the picture) came out to my right, I passed on him, still watching the larger one. Long story short, the biggest buck walked away and this guy came back. I saw that he was much larger in body size to the others and that he looked mature, so I shot him.

After the shot, I watched the deer walk about 20 yards away, looking fine. I was worried that I missed. I could not see a wound or my arrow. While watching this buck the giant one came back and stood 10 yards in front of me broadside, then the buck I shot tipped over 30 yards away.  When I went to look for my arrow I didn’t see much blood for about 10 yards, but then there was a lot and my arrow was right next to the deer. The arrow passed through a little back as the deer was quartering away and came out the other side, going through the heart. The Mathews Creed XS that I was using is very fast and had no issue sending the arrow through the buck, even though it sounded like I missed!

This was one of the best hunts that I’ve ever had. Very exciting, lots of action and I even ended up getting one. Every time I hunt, I keep a journal of where I sat, what I saw, wind direction, temperature and any other notes. This book is full of rut action between October 26-30 more than any other day on the calendar (besides 2013, which was more of a “trickle rut”). While I agree that moon times and peak breeding begins in November, see Best Days to Hunt the Rut, I have found that for me, in this spot, the days before Halloween are the golden ticket. 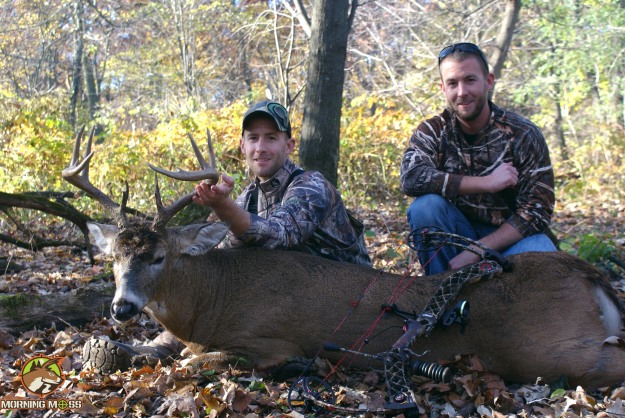 PJ and his brother Ryan, who helped drag the buck out to the truck.

No does on this Hunt

One of the most interesting things about this hunt was that I only saw one doe and it was after I shot my buck and was watching the other deer below me, which I did for a good half hour after he fell over. I sat there, drank coffee and watched the bigger of the bucks that morning spar with a 2 year old 8 pointer.

It’s always disappointing seeing the hunting season end early on in the year when there is still so much great time to be had during the rut, but I just tell myself that you have to take opportunities when they present themselves.

Check out more great bucks shot this year by MorningMoss fans and make sure to submit your story to us.