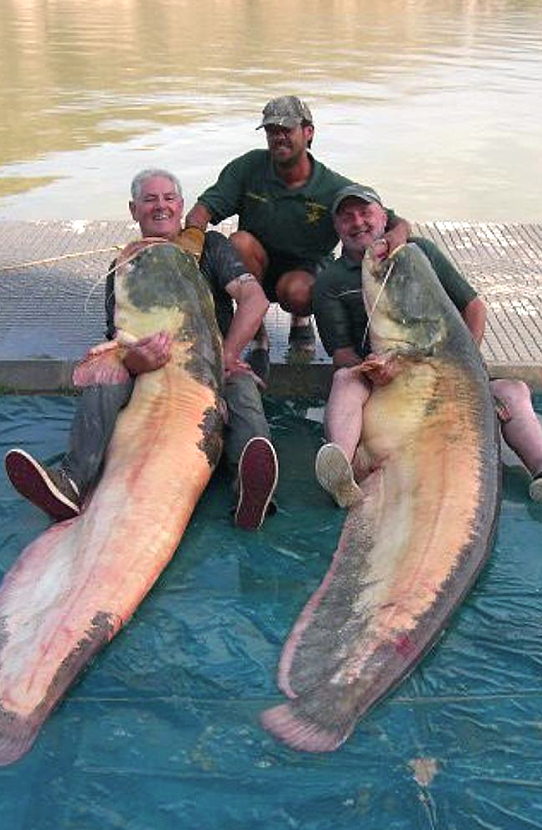 River fishing can be unpredictable, just ask anyone who hits the Mississippi routinely, but these two guys on the River Segre in Spain got a whole lot more than they bargained for. Recently, two fishermen, John Edwards and Tom Herron were fishing for catfish in Mequinenza, Spain when they landed two giant albinos.

Edwards first reeled in a 209-pound part albino catfish, which they believed to be the largest albino ever caught. He made sure that his fishing buddy knew he was the king of the trip and bragged a lot, only to eat his words later on. 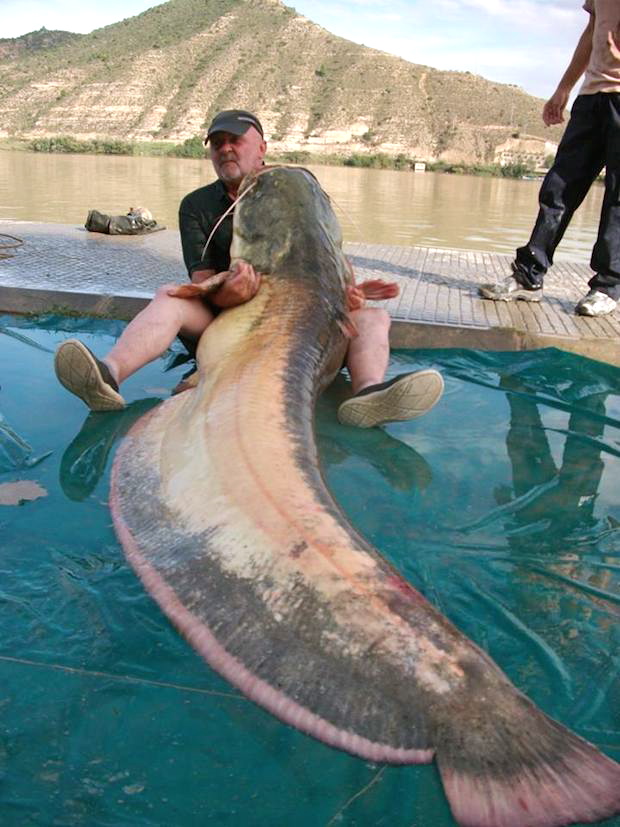 “He was running up and down the bank shouting, ‘Yes, yes, I’ve caught the biggest fish!’” Edwards told the Plymouth Herald.

Unfortunately for Edwards, his bragging rights didn’t last long. Herron soon after hooked a large fish and an hour later, landed an albino catfish that weighed 221 pounds, and also the presumed record!

These fish were absolutely enormous and they taped out at 7 feet 11 inches for Edwards and 8 feet 1 inch for Herron.

Albino catfish are catfish with lighter pigmentation and are referred to as albino. There is not an official world record for just a lighter colored fish. However, many fishing charters in the area keep track of the larger catches like this and the albino catfish that are really popular in Europe. The British charter that they caught the fish on is named the CatMaster Tours and said that these were the biggest they’ve ever caught.

“We are as certain as we can be that nobody else has ever had a brace of normal catfish that big before anywhere in the world,” the spokesman said. “So a brace of albino catfish that big … it must surly be the first time that has ever been done … So yes, this is a world first.”

In any case, this was a crazy, lucky day for both fishermen and well deserved. The fishermen were fishing for eight hours that day before they caught the first fish.

“When they were photographing his catch my rod started to go, and I said, ‘I’ve got a big fish here, I don’t know what it was, but it’s one big fish,” Herron told the Herald. “It was like dragging two sacks of potatoes through the water; it was unbelievable. I’ve been fishing for 50 years and this was the biggest fight I’ve ever had.”

What a day on the water and what a great moment for these anglers. Congratulations to both and hopefully they’ll make more fishing memories together.

Check out more of the latest fishing outdoor news.